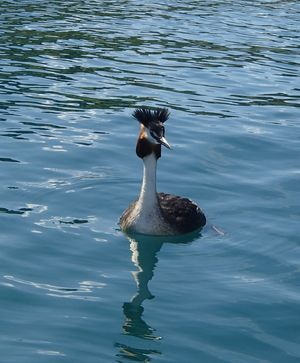 The Australasian grebe is classified as threatened - nationally vulnerable. It occurs in low numbers at a number of South Island lakes, with Lake Hayes and now Lake Wanaka in Otago both being breeding strongholds. Photo: RNZ / Alison Ballance

Meet the Australasian crested grebe, a lake bird that is more closely related to penguins and albatrosses than it is to ducks.

It is so aquatic that it can’t walk on land; it can pull itself on and off its nest, but that’s the extent of its terrestrial forays.

A bird can disappear from one lake and turn up on another, but no one in New Zealand has ever witnessed it flying. In other words, it’s a bird beset by mysteries.

But for the past three years John Darby, a penguin and albatross biologist who retired inland to Wanaka, has been unravelling some of this bird’s secrets.

What began as a passing desire to help out a single pair of birds that were trying – and repeatedly failing – to breed on Lake Wanaka has become a passion.

And it’s a passion that has spread from John to the entire township of Wanaka – and beyond.

“The grebe had such a reputation, not just with me but with all biologists, as being this really quite extraordinary bird. And the opportunity to see them, to see them breeding and then to do what we’ve been able to do has been astonishing. I just never believed that I would be doing this three years after I started.”
John Darby, biologist and grebe minder, Lake Wanaka 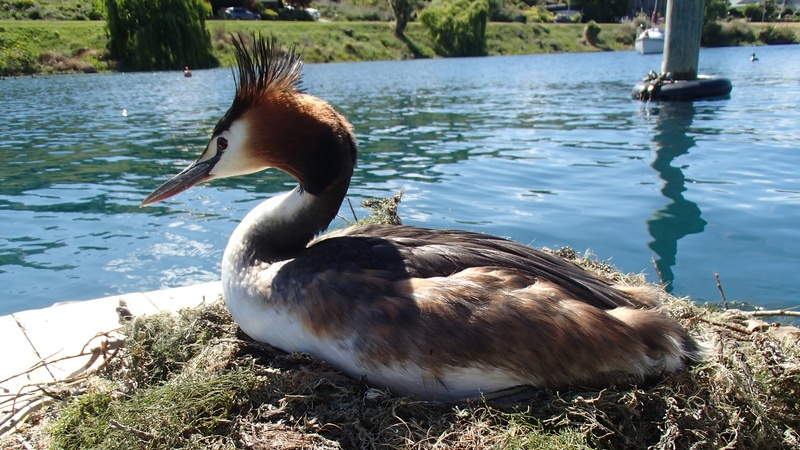 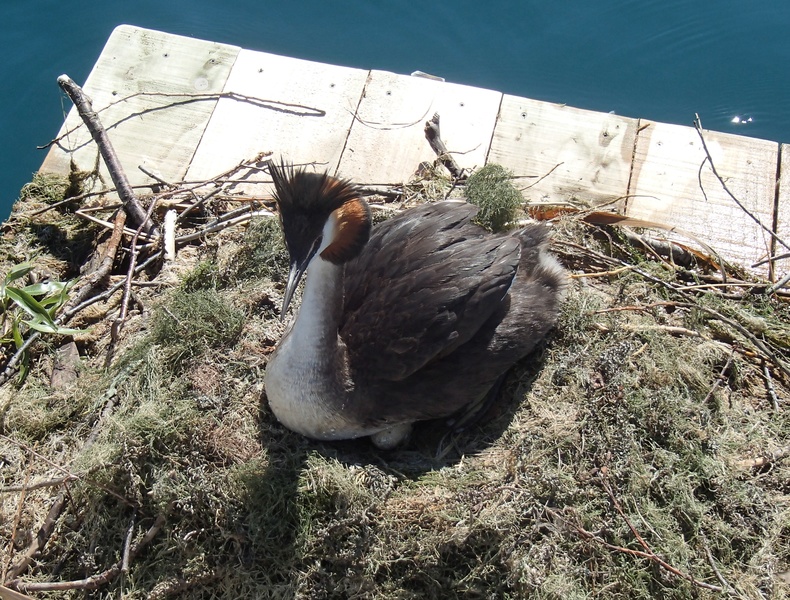 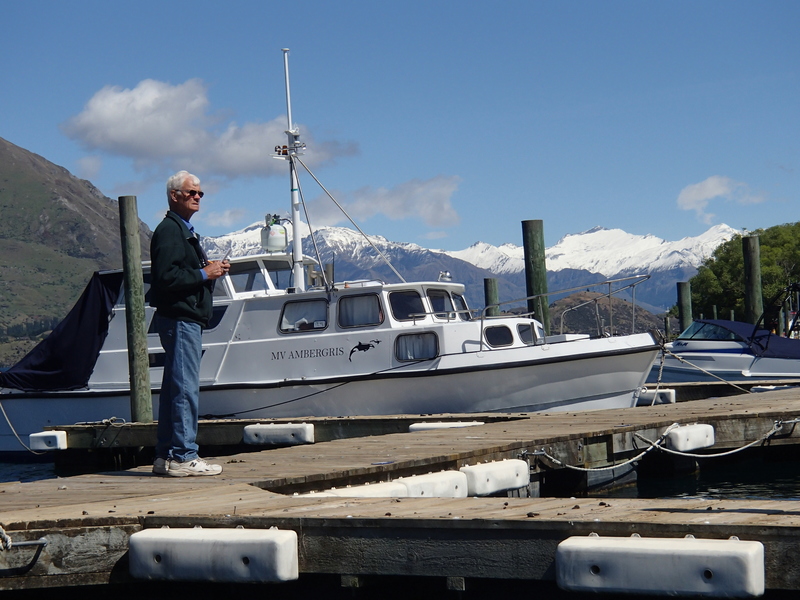 Grebe pair: the right hand bird has a feather in its bill to feed to the chicks on its back (just visible as black and white striped fuzzballs )photo Alison Ballance Grebe pair: the right hand bird has a feather in its bill that it is feeding to the chicks riding on its back photo Alison Ballance 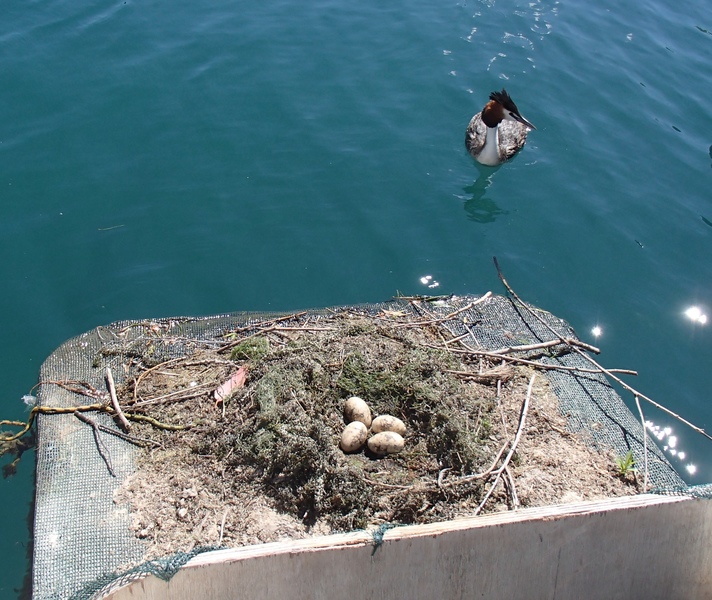 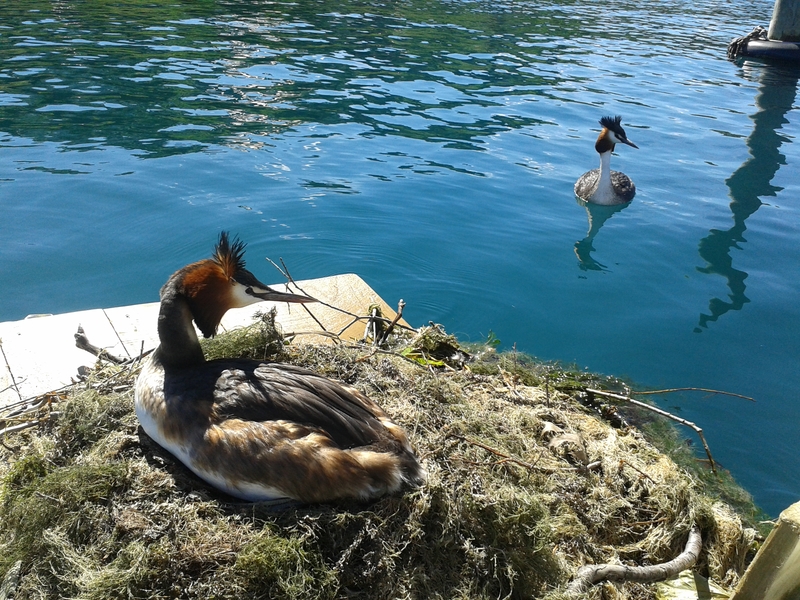 Grebe pair: female is incubating eggs while her mate is swimming nearby photo Alison Ballance 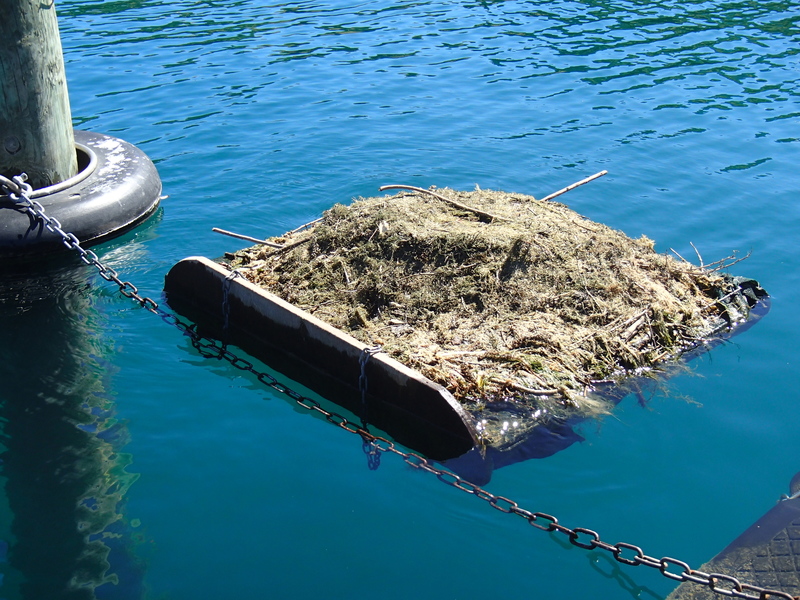 Floating grebe nest platform: the nest rises and falls as the floating marina moves up and down photo Alison Ballance 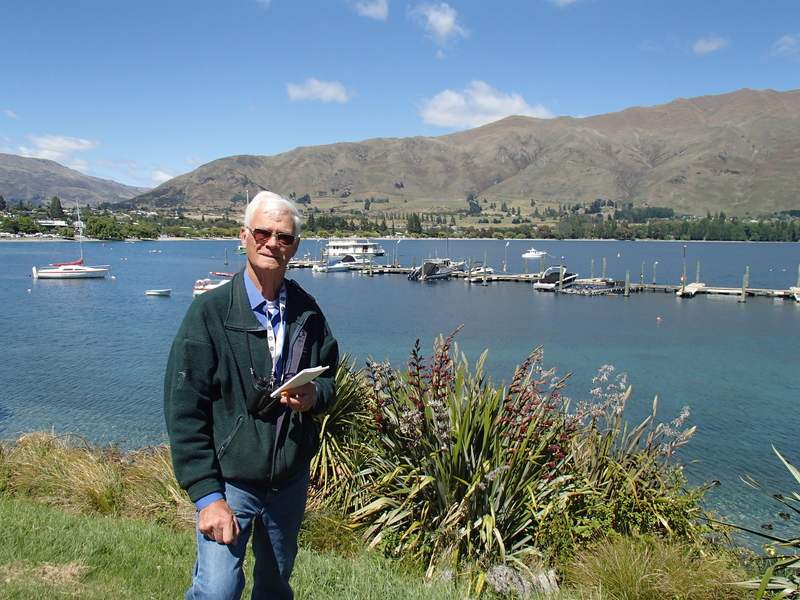 What John realised early on was that the problem for the grebes was the way water levels in Lake Wanaka rise and fall, markedly and often. The grebes would build a nest platform at the lake edge only to be swamped by a flood event, or left high and dry when water levels receded.

The grebes were trying to nest near the small marina, just 100 or so metres from downtown Wanaka, and John noticed was that the marina was a floating one, designed to rise and fall with the lake.

So, he built an experimental nesting platform. One of the marina boat owners gave him some plywood, and the local swimming pool gave him some broken pool noodles, with John figuring that what worked as flotation in the pool would also work in the lake. He stapled weed matting to the plywood platform, and after weaving willow branches into it as a base he piled it with lakeweed to resemble a real grebe nest.

Then, with the permission of the marina and its users he attached the platform by rope to one arm of the marina, and waited. He didn’t have to wait long before the unlucky grebes, spotting a golden opportunity, claimed the floating nest platform as their own and successfully raised a clutch of chicks.

The grebes love their super-sized nest platforms, made from old plywood with broken pool noodles for flotation. The bird on the right is incubating eggs; one egg is just visible beneath her. Photo: RNZ / Alison Ballance

Somehow news of these fantastic floating nest platforms spread within the Otago grebe population and by the middle of the following winter seven pairs of grebes turned up at the marina. They were so keen that they began breeding in mid-winter, just one of many unusual and previously unrecorded behaviours that John has observed in Lake Wanaka’s grebes.

John’s response was to start building more – and more – floating nest platforms, and the more he built, the  more birds turned up to use them. This spring and summer he has had 17 pairs of birds using the nests at different times, with up to 18 grebes present at any one time.

Once the grebes have built a nest they are very loyal to it. John has rescued nest platforms that have broken free in storms and floated away, and had the birds return to incubate their eggs within minutes of him reattaching it. He has had to move a nest off the transom of a boat, on to one of the floating nests, and the female moved right onto the nest in its new location without hesitating.

The great thing about John’s floating nest platforms is that they isolate the grebes from the vagaries of changing water levels, and being on the marina also keeps them away from predators, including dogs out walking with their owners.

The birds are perfectly happy with their boat neighbours, carrying on with life as usual even as boats come and go, while the boat owners in turn are delighted to share the marina with the birds. And the wider population of Wanaka is just as enamoured with these elegant birds, and the entertaining performances they put on just a few metres offshore.

With a safe nest location sorted, the grebes now spend lots of time in the stretch of water between the marina and the foreshore, courting and dancing, fighting each other over territory, and raising their chicks. The adults and chicks abandon the nest platform within a few days of hatching, and the little chicks are carried around on their parent’s back, riding “like little charioteers” as John describes it.

The parent birds take it in turn to carry the chicks while the other bird chases down little fish to feed them.

One of the many grebe mysteries that intrigue John Darby is the parents' habit of plucking their own breast feathers and feeding them to their chicks. In the photos below you can see the parent at the right with a white feather in its bill (left) turning to offer it to the small black and white chicks that are just visible riding on its back. Photo: RNZ / Alison Ballance

The other item that is frequently fed to the chicks is feathers. John says that the birds pluck a small feather from their own chest, dip it in the water and then offer it to the chicks to eat. He has no idea why the birds do this.

John wonders if it is also a way of getting water to the chicks, but he says if that was the case then they wouldn’t need to eat the feathers. This is just one of the many observations that John has been making about the grebes: he has noticed, for instance, that they lay five eggs in their first clutch and usually three in their second, and that they always lay one infertile egg., and he has been wondering why.

Regular waterfront walkers have taken to carrying binoculars so they can check up on the birds as they pass, collaring John to ask him probing questions about aspects of the birds’ behaviour.

John’s regular columns in the local newspaper are avidly read and talked about, and busloads of overseas birders and photographers have been known to turn up for what John says are the best views of Australasian grebes in the country (and possibly the world).

Operation Grebe is becoming much larger than just John, as a number of keen volunteers are stepping up to fund the nest platforms and help him in their construction and daily management. And with 76 chicks fledged in the last three years, there’s no shortage of grebes to keep John and the other grebe fans busy for years to come.

Note from a listener on flying grebes 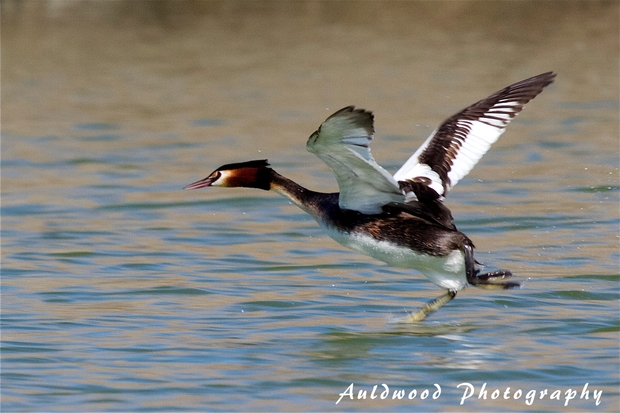 Listener Steve Attwood shared this photo of an Australasian crested grebe taking off from a Canterbury lake. Photo: Steve Attwood

Listener Steve Atwood wrote in to say that, contrary to John's comment that grebes are never seen flying, he has seen them flying on several occasions. The photo above is one of Steve's. He writes:

"Grebes are a particular favourite of mine and have been part of my life since a toddler. My experience of them began as a toddler when my parents built a bach at Lake Clearwater in the Ashburton Lakes, one of their strongholds.

They can, of course, fly very well and used to breed in the high country and Fiordland Lakes of the South Island and then fly to the coastal lakes for the winter. In recent years in Canterbury, grebes have started to change their behaviour and remain on the coastal lakes and breed there. Remarkably, they have chosen some of the small lakes and ponds within Christchurch City such as Roto Kohatu at the top end of Sawyers Arms Road, the main lake at Clearwater Resort and the Kaiapoi Lakes in Kaiapoi to breed in (among others). They are also now breeding on Lake Ellesmere and Lake Forsyth."