“The red damselflies we call the slow species, because they take so long. They live up to three years as larvae before they metamorphose. The blue damselflies, on the other hand, only take a year to a year and half – they’re the fast species.”
Tanya Dann PhD student University of Otago

Tanya Dann uses a sweep net to catch damselflies at Sullivan's Dam near Dunedin. Damselflies, such as the blue damselfly (right) are slow fliers that stay near the shore, whereas larger dragonflies fly more strongly and are often seen well away from the shore. Photo: RNZ / Alison Ballance 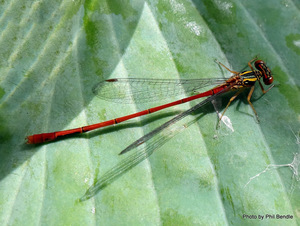 Damselflies are the small cousins of dragonflies. They spend the first part of their life as larvae, living in water under overhanging vegetation around the side of ponds and lakes, before they take to the air, becoming the fast acrobatic fliers that we see in summer.

PhD student Tanya Dann, from the University of Otago’s Zoology Department has been investigating two of the six species of damselfly found in New Zealand, to see if she can work out how two such similar species can live alongside one another. Her work has focused on the common red damselfly Xanthocnemis zealandica and the blue damselfly Austrolestes colensonis.

She has found that the key difference between the two species is the speed of their lifestyle, and their ability to withstand the lean times. The blue damselfly lives fast and dies young, while the red damselfly lives in the slow lane and can survive many months without eating.  They have a different response to predators as well: red damselfly larvae freeze and escape notice, while blue damselfly  flee and are more likely to get caught.

While both species can exist together in large numbers in benign environments these differences give them an edge in challenging environments. The red damselfly does better in extreme environments, such as high altitude tarns, where food is scarce and winter temperatures can drop very low. The blue damselfly, on the other hand, has the upper hand in ephemeral water bodies, where there are no predators.

Damselfly larvae (left) live in rotting plant matter under overhanging vegetation and along the sides of still bodies of water. In benign environments large numbers of both red and blue damselfly larvae can be quickly collected in a small net (right). Photo: RNZ / Alison Ballance