The New Zealand wine industry produces hundreds of millions of litres of wine each year, has an annual turnover of more than $2 billion, and is the country’s biggest horticultural export by value. Underpinning it is more than 35,000 hectares of vineyards, planted in a range of grape varieties. And helping growers keep those grape vines in good health is a job that post-doctoral researcher Karmun Chooi at Plant and Food Research is focused on. 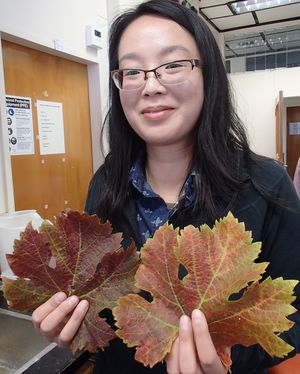 Karmun is researching a virus called Grapevine Leafroll associated Virus 3, or leafroll 3. Leafroll disease has been a problem in New Zealand for more than a hundred years, and it affects all varieties of grape as well as rootstocks. It is spread between grape vines by mealy bugs, small insects which chew into the leaves and transmit the virus as they do so. It can also be spread by tools used in propagation.

The virus causes visual symptoms such as downward rolling of the leaf margins, and in red varieties of grapes it causes premature reddening of the leaves. Although the leaves turn red the leaf veins remain green, which distinguishes leafroll 3 from other diseases. More importantly, it affects crop yield, causing uneven ripening, and reducing sugar content and increasing the acidity of grapes.

Controlling mealy bugs and removing infected vines are the only way of controlling the virus. This can be an expensive undertaking: in a case study from the Craggy Range vineyard, published by New Zealand wine, the cost of removing eight hectares of infected premium chardonnay vines was calculated to have a total cost (including lost production potential) of $1.3 million.

Karmun says that genetic work has shown there are at least six genetic strains of the leafroll 3 virus in New Zealand, which vary in their severity. Her current study is looking at three genetic strains of the virus in merlot, pinot noir, sauvignon blanc and pinot gris. Plant and Food is carrying out field trials in three different grape-growing locations, looking at the timing and severity of symptom development in the field, and Karmun is also working in lab. 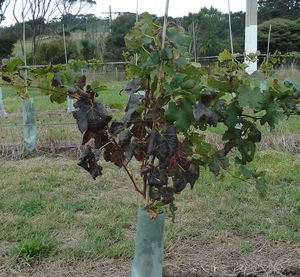 Grapevine leafroll-associated virus-3 - or leafroll-3 as it is more commonly known - is spread between grapevines by mealybugs or during pruning. As well as causing leaf reddening, it decreases sugar and increases acidity in grapes. Photo: Plant and Food Research

Detection is a key part of leafroll 3 management. The virus is currently identified using an antibody-based ELISA test which identifies the virus’s distinctive coat protein. Vaughan Bell at Plant and Food Research is also developing a visual key that he hopes grape growers will be able to use in the field to quickly assess the extent of virus infestation in red grape varieties; visual assessment doesn’t work in white grape varieties. Karmun is also involved in developing new molecular tools that could be used for identification in future.

Karmun is investigating an idea called ‘mild strain cross protection’. This acts a bit like vaccination for the vines, as vines infected with a mild strain of leafroll 3 develop very few symptoms and seem to be resistant to developing the more virulent varieties of virus.

“First we need to understand what strains of virus we naturally have in the vineyards, and then we can look for a milder strain,” says Karmun. “Mild strain cross protection is one method for protecting crops but much more research is required to really understand what it might be capable of.” 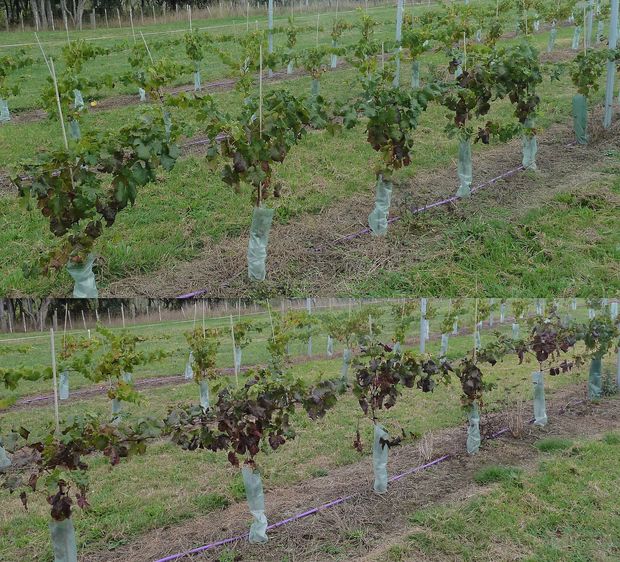 This research is part of the Virus Elimination Project, a New Zealand Winegrowers' Research Project that is co-funded by the Ministry for Primary Industries (Sustainable Farming Fund).