Research by New Zealand geoscientists, published overnight in the journal Nature Communications, reveals that Antarctic glaciers have retreated rapidly in the past, and that all it took was a minor climate warming.

The view of Mt Suess and the Mackay Glacier from Gondola Ridge. Photo: Richard Jones

A team led by Richard Jones, a postdoctoral research fellow at Victoria University, collected and analysed rocks from different elevations along the Mackay Glacier, which drains the massive East Antarctic Ice Sheet (EAIS).

The EAIS has long been thought more stable than the West Antarctic Ice Sheet, where the melting of several glaciers has now reached the point of no return, according to a NASA study published last year. This research adds evidence that the EAIS is not a sleeping giant, but has in the past responded quickly to warming. 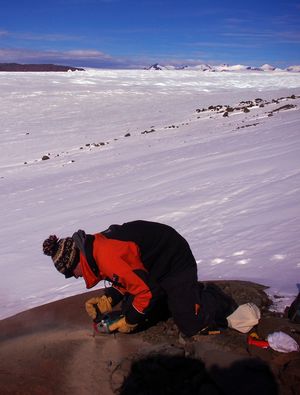 The chemistry on the surface of rocks changes when they emerge from the ice and are exposed to cosmic radiation. Here, Richard Jones is cutting samples from exposed rocks to investigate the thinning history of the glacier. Photo: Chris Fogwill

Dr Jones says the chemical analysis of the rocks the team collected shows the Mackay Glacier retreated and thinned rapidly about 7000 years ago, and the retreat continued for several centuries.

He says the rate of retreat was similar to that seen today in glaciers in West Antarctica, where satellite observations show the ice sheet is thinning in response to a warming ocean, and losing more than 150 cubic kilometres of ice each year.

Quite a few of the outlet glaciers of the Antarctic ice sheet are thinning rapidly and are theorised to undergo massive changes in ice loss.

Associate professor Andrew Mackintosh, who is part of the research team, says the results provide the first geological evidence for the potential of runaway ice loss in Antarctica, triggered by what scientists describe as marine ice sheet instability.

“Before Richard’s study, we had theory about how ice sheets might respond and we had computer models that encapsulate this theory, but we had no direct geological evidence that this had occurred in the past.

"This gives us an example of how this can occur, the period of time that this might extend over, and the rate at which the ice might be lost."

The concept of marine ice sheet instability describes how parts of Antarctica’s ice sheet grounded below sea level will react to warming.

Dr Mackintosh says when most people think about glaciers, they think they sit on top of a mountain range. While that is true in many cases, he says large ice sheets can flow into deep troughs where the underlying rock lies below sea level.

“As ice sheets grow, they coalesce and thicken and invade the land that sits below sea level. They displace the sea. But that means that they have a vulnerability when they start to retreat. That area that used to be the ocean is then exposed again."

As a glacier begins to retreat backwards, thicker parts of ice flow with greater stress, and that can lead to a runaway feedback loop. “A little bit of ice retreat leads to much greater rates of ice loss.”

Dr Jones says the team chose the Mackay Glacier because of the morphology of the underlying rock.

There is a similar trough downstream of the Mackay Glacier. So the theory was that this glacier retreated in the past and must have experienced a similar thinning, but we didn’t know about the response time. This study is important in recognising the fact that this occurred and persisted for several hundred years.”

He says the trigger that set off the rapid retreat could have been minor. “Just a couple of years of warmer ocean temperatures would have been enough to initiate the retreat of that particular glacier, but then once it encountered this deep trough, that would have accelerated the ice loss.” 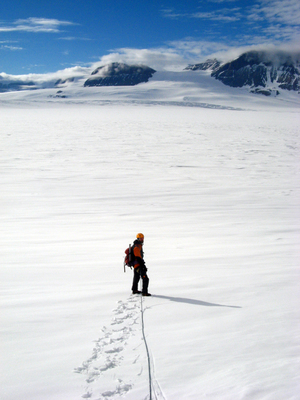 Dr Mackintosh says the findings came as a surprise.

“We went down there to understand the retreat of the ice sheet since the Last Glacial Maximum, when the ice sheet was larger than present, about 20,000 years ago. We know there’s an ice sheet there today … and that it was bigger in the past and we were trying to find out when that change occurred.

What Richard found is really dramatic. Most of this change occurred in one event that lasted for just a few hundred years and that occurred about 7000 years ago.

Ice core research has shown the climate in Antarctica returned to something similar to today’s climate about 12,000 years ago, as the world was emerging from the ice age, he says.

“The warming that occurred at the end of that last ice age was the trigger of the massive retreat of the ice sheet, and at a certain point the Mackay Glacier became independent of that large ice sheet and then underwent its own rapid transformation about 7000 years ago.”

The team will return to Antarctica in January to study a much larger glacier, which also drains the East Antarctic Ice Sheet, to look at its past thinning history.

The research was published in the journal Nature Communications.