It’s conference time of year for scientific societies, and around the country researchers are practising their power point presentations and public speaking. I heard many interesting things at the recent New Zealand Ecological Society conference in Christchurch, which involved over 300 people and lasted for 3 days.

Two things stood out strongly for me: some sometimes disturbing long term trends in our native flora and fauna, and new takes on old rodents. We’ll get to the rats and mice later, but first – there has been some fascinating work analysing long term data sets. Interestingly some of this data has been collected almost accidentally, by students on an annual ecology field trip in one case and a single scientist in another. 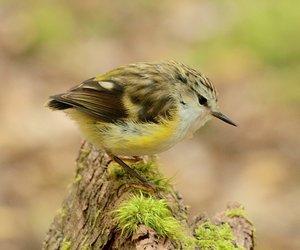 A female rifleman. Rifleman and rock wrens are the only two surviving members of an ancient group of endemic New Zealand wrens. Photo: CC BY 2.0 Digitaltrails

In a large Citizen Science effort, members of the Ornithological Society of New Zealand – now known as Birds NZ - collected bird records in the 1970s and again in the early 2000s, for two Atlases of Bird Distribution. Susan Walker at Landcare Research has been looking at what changed in the 25 years between the two surveys, and what she’s found has her worried.

She says that in the 1970s native birds had already disappeared from settled and productive landscapes but were still present in large numbers in native forests. Twenty five years later it’s a different story.

“What we’ve seen since the 1970s is a real emptying out of those forests. And the most striking pattern is that it’s not just any birds – it’s New Zealand’s deep endemic birds, those that are found nowhere else in the world and are in higher taxonomic levels such as orders and families. They are the biodiversity that New Zealand adds to the world.”

Kiwi, whio or blue duck, kokako and rifleman are just some of the birds that suffered significant population declines over the 25 years, and she says predators are almost certainly to blame as there has not been any significant land use change.

The other striking decline that she has found is in the wading birds, gulls and terns, in particular the endemic species that breed almost exclusively in inland South Island. She mentions dotterels, black-fronted terns and black-billed gulls in particular.

These inland areas are being rapidly developed for intensive farming, and she says this makes these species of particular conservation concern as there is nowhere else for these species to move – it is not possible to relocate them to islands.

“Forests are just recovering from their last disturbance.” 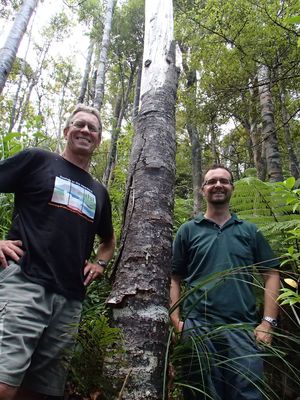 Bruce Burns and George Perry are interested in the ecology and long-term change of New Zealand forests. They are standing next to a kauri tree infected with PTA or kauri dieback. Photo: RNZ / Alison Ballance

Beginning in 1980, now-retired University of Auckland botanist John Ogden began taking stage 2 and 3 students to the Kaueranga Valley in the Coromandel, to teach them how to identify native plants and carry out basic vegetation monitoring.  Now I know this because I’ve been one of those students! These autumn field trips have been an annual event for 35 years, and Bruce Burns and George Perry have now taken all that data and analysed how the forest has been changing. It helps to know the longer term changes that have taken place in the forest. Early Maori burnt some of the forest, and in the late 19th and early 20th century there was widespread kauri logging. Then possums arrived in the area in the 1960s, with numbers peaking around 1980.

In the 1980s there was quite a lot of kanuka and kohekohe present. Kanuka is an early successional species, and as the forest has matured it has begun to disappear, to be replaced by slower-growing climax species. But the kohekohe has also almost disappeared, and the researchers think this is due to possums, which seem to have also had a significant impact on mamaku, or black tree ferns. Kauri doesn’t seem to be regenerating, and this is puzzling the researchers.

Bruce says these are the kind of changes that always happen in forests, but are often invisible to us because of the long time frames they happen over.

“There’s a huge value in having these measurements that we return to over a long period of time.” 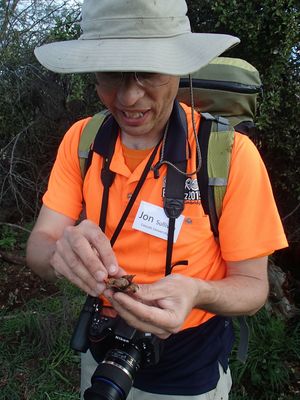 Like all good field biologists, moth and butterfly expert Brian Patrick keeps detailed notebooks.  Jon Sullivan at Lincoln University is involved in digitising and analysing these records, which cover 45 years, making it the longest monitoring dataset for invertebrates in New Zealand. Jon says that Brian has kept notebooks from the time of his childhood in Invercargill.

“There is no other dataset like it in New Zealand – and this is information that nobody knows.”

Jon says that overseas, where there have been people recording these kinds of things for long periods of time, there have been noticeable declines in butterfly numbers, and Brian is reporting the same thing here.

“When Brian goes out light trapping at night and records all the moths that come into the light he doesn’t see large numbers of moths like he used to.”

Jon says the analysis so far shows declines in moths in urban areas, with moths in agricultural areas either just holding their own or going down in number. On the other hand, moth numbers in remote untouched areas seem to be going up.

“All this evidence is pointing to some pretty alarming changes in our moth fauna, but until now we just haven’t had the numbers to back that up.” 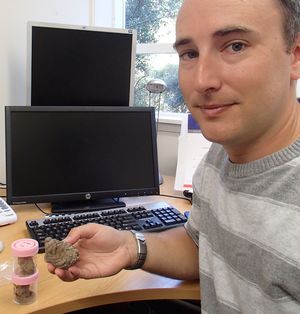 Jamie Wood has been studying coprolites - dried dung - and finding out interesting information about the genetics of birds such as moa as well as their diet. He is holding a moa coprolite. Photo: RNZ / Alison Ballance

Ancient DNA is increasingly allowing us to look back hundreds and even thousands of years to find out what species were around and what their lifestyles were. Jamie Wood from Landcare Research has previously found information about the diet of now extinct moa from their coprolites, or dried droppings, and he’s now finding even more intriguing diet information from kiore coprolites, kiore or Pacific rats of course being the first of 3 rat species to colonise New Zealand, having arrived with early Maori.

A preliminary look at a dozen rat coprolites has shown evidence of parakeet feathers, beetles and various plant material. But DNA analysis revealed something startling in one coprolite: moa DNA. The heavy-footed moa, which was a short but heavy moa, was abundant in the area that the kiore coprolites were found, with many birds nesting there, and Jamie says they are reasonably certain it shows that kiore were eating either adult birds or chicks. He says it’s difficult to discount that kiore might have been scavenging dead moa, but there is very little evidence that kiore are scavengers.

He says the idea that a small rodent like kiore might have even eaten much larger birds such as moa, and contributed to their rapid extinction after Maori arrived in New Zealand less than 800 years ago, was first suggested by the late Charles Fleming. Charles knew of evidence from several Pacific islands where kiore had killed and eaten seabirds as large as albatross, in some cases causing an annual decline of 2% in seabird numbers. This fits with recent evidence of mice on Gough and Marion islands killing and eating large numbers of seabirds.

Jamie is expecting more surprises when the DNA analyses are completed over the next few weeks.

Kiore or Pacific rats arrived in New Zealand with Maori, while ship rats, Norway rats and mice arrived with early Europeans. Caroline King from Waikato University has been using DNA and some historical sleuthing to find out when mice arrived here and where they came from – and she’s discovered something rather surprising.

Caroline says that historical shipping records showed that between 1792 and 1840 there were frequent ship movements between the Bay of Islands in the north and Sydney, which would have given mice many opportunities to reach here. She suspects, however, that the south-east Asian mice more likely arrived around 1810 with sealers working in southern New Zealand. The mice may have come directly from Canton, or via Sydney, although to date there has been no evidence of the Asian family lineage in Sydney.

The European and Asia house mice do interbreed here, although Caroline says they usually appear to have Asian mothers and European fathers, and the two subspecies can also be found living in close proximity without interbreeding.