Tea bags. Most of us use them to make a cup of tea, But not Landcare Research ecologist Barbara Anderson. This avowed coffee drinker sees them as an indispensable bit of scientific kit.

Barbara Anderson (left) and Ralf Ohlemuller digging up the more-than 800 tea bags that they buried at different altitudes along a ridge leading to the summit of Mount Cardrona, near Wanaka. Photo: Greg Nelson and Robbert McCann / Landcare Research 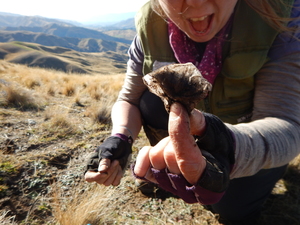 Barbara Anderson is very excited about a partially decomposed tea bag, that was buried up on Mount Cardrona for several months. Photo: Landcare Research

And these are not just any old tea bags. They are a particular brand that isn’t sold in New Zealand, and Barbara and husband Ralf Ohlemüller, who collaborates on this research, had to ask various friends and family members to send them boxes of tea bags from overseas. This was quite a big ask as the team used 810 tea bags in their field experiments, with more required for use as controls.

Barbara says the Lipton tea bags really just standardised litter bags, filled with a known quantity of tea that has already been analysed by the Netherlands team that came up with the Tea Bag Index. The advantage of these particular tea bags is the synthetic bag, which doesn’t rot when it is buried in the ground.

Changing mountain weather made working on Mount Cardrona difficult at times for the Tea Bag Team, seen here making their way down from the 1936-metre summit in low cloud and rain. Photo: Landcare Research

The research team is looking at how much carbon is in the soil system, and whether it’s acting as a carbon sink (storing carbon) or a carbon source (producing carbon).

Ralf, who is in the Department of Geography at the University of Otago says that “once we can quantify how climate drives whether a system is a carbon source or a carbon sink, we can then make a model of how climate or climate change impacts on these ecosystem properties.”

The study site is Barbara’s family’s farm in the Cardrona valley near Wanaka. The team were interested in how rates of decomposition vary with altitude and exposure, and they chose a prominent ridge on Mt Cardrona stretching from the peak at 1936 metres to the valley floor at 500 metres. Pairs of red and green tea bags were buried 10 centimetres deep each 100 metres. They were buried in January and pulled out in April, so were in the ground for summer. Temperature and soil moisture data were collected for every site.

When the team went to collect the tea bags at the end of April they had to battle an early fall of snow, which made finding and retrieving all the bags very challenging. “We had to chip them out of the ice” says Master’s student Robbert McCann.

“Basically we want to get a whole lot of information at one site across an elevation and an aspect gradient to look at the effect of microclimate” says Barbara.

“We really need to look at fine-scale studies if we want to say where climate changes and how it changes, and how it affects all species in mountainous environments” adds Ralf.

The tea bags were buried for three months during summer, and an early autumn snow storm made retrieving them difficult. Robbert McCann (right) has just chipped a tea bag out of the icy snow. Photo: Greg Nelson / Landcare Research

Ralf says that the weather information they have collected over two years is an exceptional record of climate across an altitudinal gradient, as it is difficult to collect this kind of information in mountain environments. It has given them precise figures around how much colder it is at high altitudes or on shady slopes, compared to lower or sunnier sites.

“There is a lot of research going at the moment about species living in mountainous species and what happens to these species – to plants and insects – under changing climates,” says Ralf. “And clearly, as it warms, these species will have to move up the mountain to track the climate that they need or like. And on lots of mountains they’ll simply run out of space. But what this sort of research shows is that maybe the species don’t actually have to move up the mountains – maybe they just have to go around the sides.”

This study is part of a wider research project into tussock grasslands and alpine regions, which Ralf says are very important for the water cycle and for endemic species,

Barbara was awarded a Rutherford Discovery Fellowship in 2012, which provides funding for 5 years. The tea bag study is part of Robbert McCann’s research for a Master’s degree.

The results of the New Zealand tea bag research will eventually be compared with other similar studies around the world, all carried out using identical tea bags and following the Tea Bag Index. 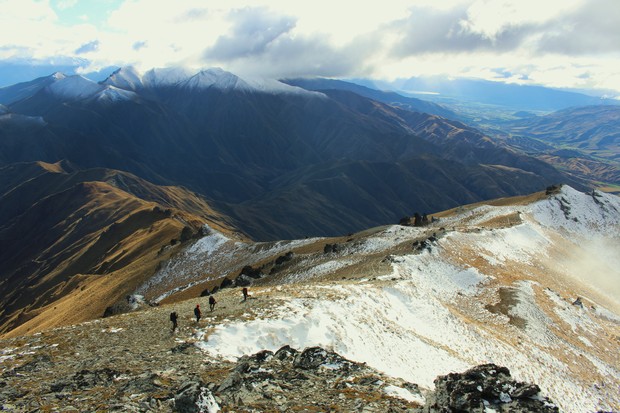 The ecology of tussock grasslands in Central Otago is poorly known. This is a view from Mount Cardrona looking up the Cardrona Valley. Photo: Landcare Research