From a fluid mechanical perspective, Cook Strait is just a work of beauty.
Craig Stevens, NIWA

Cook Strait is known as one of the most turbulent and unpredictable bodies of water in the world. It is a bottleneck for winds and strong tidal currents, but it is also unusual in that the tidal elevations at either end of the strait are almost exactly out of phase, which means that high water on one side meets low water on the other. 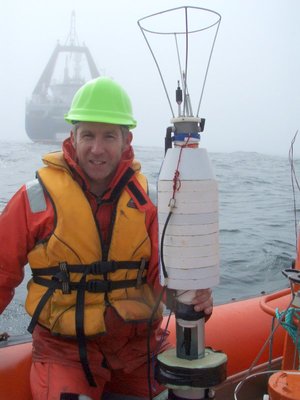 Craig Stevens, an oceanographer at NIWA and the University of Auckland, recently completed the first comprehensive measurement which used moored autonomous instruments to track transport across the strait.

He says the difference in tidal heights and the narrowing of the strait means that unremarkable currents that might only be a metre per second “get pushed to something that’s around three to four metres per second at its fastest, and that’s actually comparable to French Pass, which is the iconic bit of New Zealand water that we think about in terms of energy and excitement.”

Tidal currents are an important component of the strait’s energy budget, and some of Craig Stevens' work has focused on the potential of tidal energy. “Working out the tides is the obvious one because we see it, it’s fast, it’s the sort of thing that is relevant to marine energy and relevant to the longevity of power cables that go along the seabed”, he says.

“But as soon as you’re thinking about things that happen at longer time scales, like the transport of fish larvae or pollution, … then you have to look at the residual or subtidal transport, the little bit that’s left over after the tide has washed back and forth.”

The results from the latest measurements are rewriting our understanding of water movements across Cook Strait.

The current understanding of the strength of residual transport across Cook Strait comes from limited data. Back in the 1970s, when the first current measurements were made, oceanographers put a railway wheel on the seabed at a depth of 300 metres and ran cables from it with floats that rose up to about 30 metres. Current meters were attached along the wires, and the whole contraption was left in the water for months.

“But what happened is that the speed of the tide pushed it all down and the current meters were measuring near the seabed.” 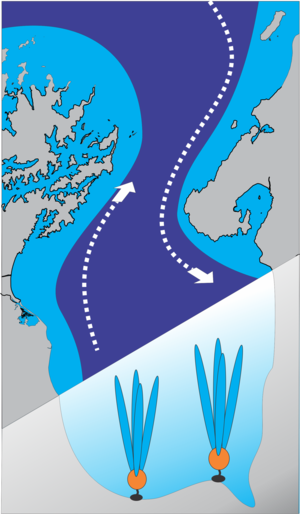 The latest technology uses acoustic methods – like an undersea police speed radar – pinging from autonomous instruments that can be left on the seabed for more than two years. The instrument pings out acoustic waves in a range of different directions, analyses the Doppler shift that comes back and calculates the speed of the water.

“We haven’t deconstructed the paradigm,” says Craig Stevens. “But the residual flow is quite a bit slower than we thought, so there is less flux through Cook Strait and actually some of it is in the direction opposite to the arrows you’d draw on a chalk board in a simple picture of the strait.”

The results bring two surprises. The absolute tidal speeds, at around four metres per second, are much faster than any of the velocities that had been identified before, but the residual flows are less than previously thought.

That’s quite important for understanding the circulation in the central New Zealand continental shelf. We’ve got much bigger transport fluxes to the north and to the south, but what happens in the middle is this delicate balance between the two, so quite a small transport through Cook Strait can have a big effects on how that balance goes.