Kaika Energy - from food waste to fertiliser and biogas

“It was a very stinky process – and a messy one.” 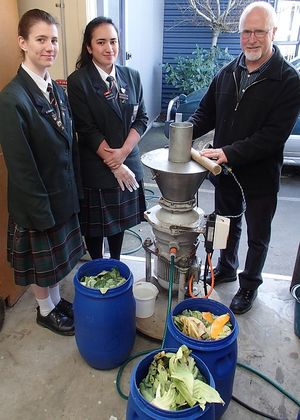 That’s sales director Paige Gilder’s memory of scraping up 900 litres of fresh cow poo at a milking shed on a dairy farm. The cow manure was destined for a biodigestor that had just been installed in the grounds of Kaikorai Valley College, in Dunedin, and Paige was one of the six Year 13 students who had had the bright idea of creating a company based around the biodigestor.

Setting up the biodigestor – which is essentially a large cow’s stomach – is just one of the messy and smelly jobs that the young directors of the fledging biotechnology company Kaika Energy have had to come to grips with.

Dealing with mouldy, wilting and sometimes rotting food is another one of the regular and less appealing parts of the process, and Kaika Energy’s operations Deanna Teremoana says it’s a job they’ve learned to do outside, in the fresh air, especially during hot weather.

Kaika Energy is a company that takes food waste and uses it to produce biogas and liquid fertiliser. It was created by students taking part in Kaikorai Valley College’s Young Enterprise Scheme, and was inspired by research from the Love Food Hate Waste NZ campaign, showing that nearly $900 million worth of food is thrown away in New Zealand each year, with thousands of tonnes ending up in landfills. The students thought they could use food waste from the school and nearby businesses to instead create some useful products.

Technology tutor Peter Dodds is technical advisor to Kaika Energy. He has helped them out in many ways, from helping arrange for an Urban Biodigestor to be imported from China, to tracking down YouTube videos to help with its installation, and using his car to collect waste food from the dairies and supermarkets that have agreed to take part.

Deanna explains that once Peter has delivered the waste food to the school, it goes into the macerator, which is essentially an industrial-size waste disposal unit that smashes the food into a wet slurry.

“One of the things we’ve got ensure is that the biodigestor gets a balanced diet,” says Peter. “Basically we’re feeding a big cow and it needs to get a good mix. So we don’t give it a whole lot of brassica I one go, but try to mix vegetables, fruit and bread.”

The resulting slurry is then fed into the biodigestor – filled with those 900 kilograms of cow manure - which is housed in a small heated greenhouse. At the moment the heating pad for the greenhouse uses mains electricity, but in future the Kaika Energy team are planning to make the entire process self-sufficient by using the biogas to provide heating. They need to buy a biogas generator that can produce power to run a hotwater cylinder and a pump to circulate hot water.

The macerator (left) processes food waste and water into a slurry, that is then fed to the biodigestor (right). Photo: RNZ / Alison Ballance 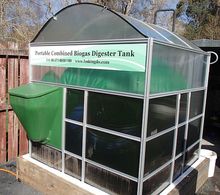 Kaika Energy's urban biodigestor - the digestor's 'stomach' is filled with cow manure, and the methane: carbon dioxide biogas produced as part of the process has filled the green inflatable bag inside the heated greenhouse. Photo: RNZ / Alison Ballance

The biodigestor has just come up to full production, after a 21-day settling in process during which the microbes from the cow dung established a viable population; it is now given new feedstock every day or couple of days. As new food waste is put in the biodigestor pushes out an equal volume of fertiliser, and it also produces large volumes of a 60:40 methane-carbon dioxide mix that is collected in a large inflatable bag. At the moment the gas – which has a sulphurous smell – is safely neutralised by being piped into a large bark filtration box filled with damp bark, which contains enzymes that absorb the methane. The next step will be to flare off the methane.

Paige and Deanna say the idea is to eventually use some of the biogas to run the school tractor, for example, either directly or to use the biodiesel generator to charge an electric vehicle. They also plan to set up a greenhouse as part of the school’s urban farm. The aim is to use some of the fertiliser on the school’s urban farm and in the greenhouse, and to sell some to raise money for the company’s operational costs. But before that can happen the fertiliser needs to be scientifically tested.

Kaika Energy is featuring in cross-curricular activity across the school, and the fertiliser, for example, will be tested by science students. The students involved all earn NCEA credits.

“We could either make things grow really well or kill them, and we’re not quite sure where we are at the moment,” says Peter. “That’s our main concern,” adds Paige. “We don’t want angry customers.” 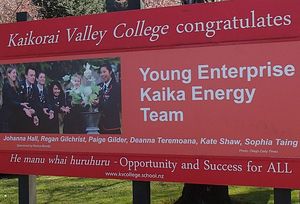 Kaika Energy’s six directors are full of praise for the many Dunedin – and even national – companies that have provided them with equipment, business and mentoring advice, and help with the installation of the biodigestor.

Deanna says the routine of running the company is taking up a lot of time, but both she and Paige are adamant that the effort has been worth it. They are in their final year at school, and when they leave they are hoping that next year’s Year 13 students will become directors and keep the company running.