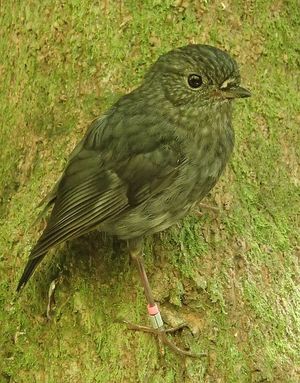 Bush robins are one of the most commonly translocated bird species in New Zealand, although not all reintroductions succeed. Photo: RNZ / Alison Ballance

“There are really two reasons for moving animals around. One is because you’re concerned about the species itself, as it’s got down to very low numbers or just one population. The other is for ecological restoration reasons, for example a sanctuary that you want to restore to the way it was and a big part of that is bringing back the species.”
Doug Armstrong, reintroduction biologist, Massey University

From tuatara to giant weta and robins, species are on the move around New Zealand, and they have been since the early 1960s, when the late Don Merton began moving saddlebacks between islands.

This was a technique that the early conservationist Richard Henry pioneered in Fiordland in the late 1890s, when he moved hundreds of kakapo and kiwi to Resolution Island in an ultimately doomed attempt to save them from the ravages of introduced stoats on mainland New Zealand.

Advances in Reintroduction Biology of Australian and New Zealand Fauna is a recent publication that reviews what’s been happening both here and in Australia. While lots of this information exists in scientific papers, the book’s authors, including Massey University’s  Doug Armstrong and Kate Richardson, wanted to make it available in one easy-to-access volume. The book’s chapters are written by different people, and include case studies and useful advice.