“We think a lot of today’s enzymes are not as good as they could be and we’re exploring how that could be.”
Matilda Newton, University of Otago 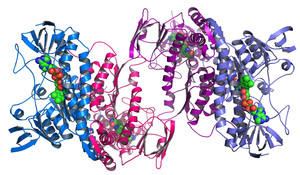 Proteins are the work horses of cells, and are made up of strings of amino acids. Photo: CC BY-SA 2.0 Matt Howard

Proteins are the work horses of cells. Royal Society of New Zealand Rutherford Discovery Fellow Wayne Patrick and colleagues in the Laboratory for Enzyme Engineering and Evolution (or E-cubed Lab) at the University of Otago are most interested in enzymes, proteins which catalyse biochemical reactions.

Wayne says he is “interested in the evolutionary processes that gave rise to enzymes and using that knowledge to look at what the future may have in store for those enzymes.”

Although evolution usually takes place over long time periods - millions, even hundreds of millions of years - Wayne says that it can also take place incredibly rapidly. He cites the emergence of antibiotic resistance, and bacteria that can degrade human-made pesticides, as examples of this.

For her PhD Matilda Newton studied how one enzyme can evolve from one particular function to another function, and developed a large family tree of enzymes. “I studied two enzymes that are related to each other; so two proteins can be related just as two species can be related.  You can think of, say, a horse and a zebra, and then look at my two proteins and think of them as being similar in those sorts of ways.”  Matilda has been studying how one protein can be turned into the other one, and from that infer some of the changes that might have been happening naturally over millions of years, or as Wayne has pointed out, have happened really quickly.

“I found that one of these enzymes could be switched into the other one with minimal changes,” says Matilda. “Proteins are made of about 250 amino acids, so they’re like a string of beads, and we found that as little as changing three of these little beads was enough to change one enzyme into the other one.”

Matilda says that enzymes are usually very specialised, but some of the enzymes she was working with had several different ways of employing their chemistry.

“We might be glimpsing what a primordial enzyme looked like four billion or so years ago,” says Wayne. “They may have done their jobs poorly or sloppily, but good enough for life to get going.”

Their rather provocative suggestion is that rather than evolution always being a slow and steady march from barely functional life forms in the primordial soup, towards a modern-day pinnacle of near perfection, it more often resembles a drunken walk – and, as a result, many enzymes were better catalysts in the ancient past than they are today.

Matilda, Wayne and University of Waikato collaborator Vic Arcus recently published a paper discussing evolution in proteins. They discuss examples in which enzymes have evolved with lightning speed—over years, rather than eons—and provide evidence that many enzymes were better catalysts in the ancient past than they are today. The paper ‘Rapid bursts and slow declines: on the possible evolutionary trajectories of enzymes’ was published in the Journal of the Royal Society Interface.

The work of the E-Cubed Lab includes collaborating with biotechnology company LanzaTech, which has a microbe that can grow by using harmful greenhouse gases from industrial plants such as steel mills and oil refineries. The Otago researchers are engineering enzymes to put into this microbe so it can produce useful raw materials, such as butanone and 2-butanol, that are otherwise made from petroleum.

In 2010 Wayne Patrick was named Young Biotechnologist of the Year. He has previously been on Our Changing Word talking about promiscuous proteins. Matilda Newton is a post-doctoral fellow at the University of Minnesota.