“Worms do a great job in the soil to promote pasture growth.”
Nicole Schon, Agresearch.

When it comes to worms, the more the merrier as far as earthworm scientist Nicole Schon is concerned. She’s busy translocating deep burrowing worms to farms around the country, in the hope of building up their numbers so that they, in their turn, will help promote grass growth and feed more livestock. 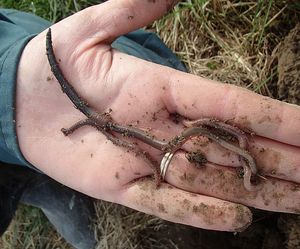 A handful of worms collected from a small clod of soil is an indication of a healthy productive pasture. Photo: RNZ / Alison Ballance

“All the worm species we have in our pasture systems are exotic, and they arrived accidentally with European settlers, in soil with fruit trees and in ship’s ballast,” says Nicole. “We’ve got about 12 common species but they’re not all found everywhere. We might find two to three species in a paddock – if you find more than that you’re doing quite well, really.”

Nicole points out that New Zealand has also got over 200 species of native earthworms, but she says that they prefer our forest ecosystems.

The two commonest worm species on New Zealand farms are the dung worm (Lumbricus rubellus) which feeds on organic material, including dung, near the surface of the soil, and the grey worm (Aporrectodea caliginosa) that is active in the top 15 cm of the soil. The dung worm is a dark red-brown colour and very active when it is disturbed, while the grey worm is pinky grey in colour with a darker head. 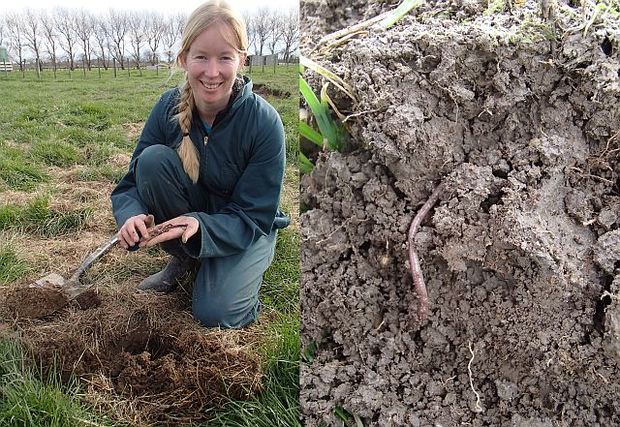 Nicole Schon holding earthworms collected from a breeding plot that has had extra organic material, in the form of hay, added to the ground to encourage the worms to breed. Photo: RNZ / Alison Ballance 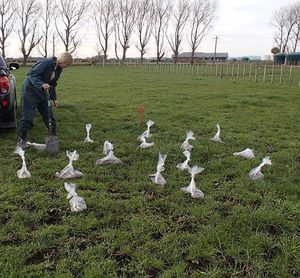 Nicole Schon about to add sixteen bags of deep burrowing worms as part of an experiment to increase the number of worms on this Manawatu farm. Photo: RNZ / Alison Ballance

The worm that Nicole is translocating is the blackhead or deep burrowing worm (Aporrectodea longa), which as its name suggests, burrows more deeply and will help water and grass roots penetrate deeper into the soil. Deep burrowing worms are mostly absent in the South Island and don’t occur everywhere in the North Island; a previous study found that six and a half million hectares of pasture land in New Zealand lack deep burrowing earthworms.

Each of these worms has a slightly different role in the soil, and together they result in well aerated, rich soil.

Nicola says that when the first worm reintroductions were carried out in the 1980s researchers found that the presence of deep burrowing worms increased pasture production by up to 20%. In pastures with no worms a thick thatch of dead grass accumulated on top of the soil. What the worms did was break this thatch down, dragging it into the soil where it added important organic matter. The action of the worms also increased water movement through the soil, aerated it and provided channels so roots can reach down further.

This earthworm relocation project is a six-year long Sustainable Farming Fund project, organised by Agresearch and Beef + Lamb NZ, and involves a number of Landcorp and private farms. Deep burrowing worms have been moved to three farms in the Manawatu, seven on the central plateau in the North Island, and 10 each near Timaru and Oamaru; none of these farms currently have deep burrowing  worms. In some paddocks sixteen bags, each containing six worms, are added to the ground. In others, turfs containing  some worms are added instead. Nicole and her team will return in a year to see whether the deep burrowing worms have established and increased in both number and area, and will continue to monitor for a further two years after that.