“My work is on trying to understand how ecosystems respond to changes in the environment, and how that translates into the way ecosystems function. Things like how they produce food, how they recycle nutrients, diversity, those sorts of things.”
Jason Tylianakis, terrestrial ecologist, University of Canterbury

Jason Tylianakis loves complexity, and the interconnectedness of the natural world. And he’s grappling with some of the big questions of our age: how will the big changes we’re causing, such as climate change, species invasions, changes to the nitrogen cycle and land use change, impact natural ecosystems. And while it’s complicated enough to look at any one of these issues, Jason reminds us that these things are happening all at once, so we need to understand how they all interact. 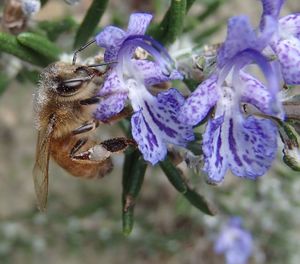 A honeybee forages for pollen on a rosemary flower. Photo: RNZ / Alison Ballance

“The big problem is that you could measure the impact of each one of them separately and then find that their combined impact is not the same.”

Jason is professor of terrestrial ecology at the University of Canterbury, and he also holds a joint position with Imperial College London. In 2010 he was awarded a Rutherford Discovery Fellowship.

“The response of ecosystems to different drivers aren’t independent so we can’t push an ecosystem almost to the limit with land use change and expect it to still respond fine to climate.”

An example of the kind of work Jason does with his team was a large study at the University of Canterbury’s alpine field site at Cass. For that they “literally warmed up the ground”, putting heating cables in the ground to warm the soil. At the same time they added nitrogen to some of the plots so they could record the interactions of the two impacts. They measured plant growth, soil and microbial processes, plant herbivores and the predators of those herbivores.

“We found that the herbivores – the things that are pests on crops – tend to win out over the plants and predators. So the food pyramid of plants to herbivores to carnivores tends to be squashed at the bottom basically.” This is a finding that has big implications for crop production in the future.

One of Jason’s research areas concerns pollination, and he warns that we have become very dependent on introduced honeybees to pollinate monocultures of commercial crops. In his opinion our production landscape would be much more resilient to change if we had greater diversity in the kinds of crops we use, the wider landscape and the suite of pollinators that we rely on.