Does your first language influence your trombone playing?

They speak a range of first languages: Tongan, New Zealand English, American English, German and Japanese. But the people taking part in Matthias Heyne’s research have one thing in common – they are all trombone players. 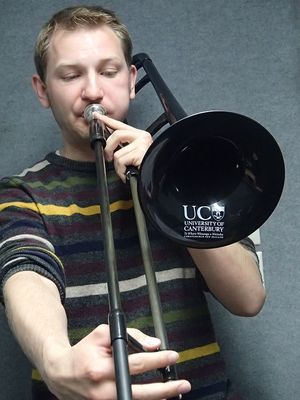 PhD student Matthias Heyne plays the 'Pbone' plastic trombone that all the study participants performed on for the study. Photo: RNZ / Alison Ballance

Matthias is a student of language and music at the University of Canterbury and the question driving his PhD research came to him when he was a German exchange student living for a year in the United States. A keen bass trombone player he thought that the American trombone players he was listening to sounded different to the ones back home. He began to wonder if the way he spoke as a native German speaker, and in particular the way he used his tongue, influenced the way his trombone playing sounded. This musing eventually led him to the University of Canterbury to carry out a PhD with the title: ‘The Influence of First Language on Playing Brass Instruments.’

To answer that question he armed himself with a plastic ‘PBone’ trombone, an ultrasound machine and a special non-metallic head brace, and began to record as many people as he could playing the trombone.

Some of the players he has shoulder-tapped are big names in the jazz world – New Zealand’s Rodger Fox, and the American Francisco Torres. Others, such as Matt Allison and Scott Taitoko, play in New Zealand orchestras, while others are band players. Through a chance meeting Matthias got in touch with the Royal Tonga Police band and made a profitable trip to Tonga to record a number of players there.

Each player goes through the same drill – the ultrasound scanner is fitted snugly under their chin with a specially designed head brace that has no metal parts and won’t interfere with their playing. Matthias will have prepared a list of all the consonant and vowel combinations in the player’s first language and they read that list into a microphone. The recordings of that list are synced to the ultrasound so that Matthias can later match and trace the tongue shape for every sound. Then the trombonist sight reads some simple exercises on the plastic trombone (this standard equipment removes all the variety that would come from individual instruments).

In this video Matthias plays the trombone and you can see the ultrasound scan of his tongue as he plays.

Matthias says the analysis is very time consuming, and to date he has only analysed some of the sustained notes. But he has noticed that speakers of New Zealand English, which uses a sound known as schwa (defined as ‘the vowel sound in many lightly pronounced unaccented syllables in words of more than one syllable’) such as the ‘uh’ in butter, use a central tongue position when playing long notes. Tongan does not have this sound so the Tongan players don’t have a motor memory for this central tongue position; instead, on sustained notes, their tongue position is further back.

Matthias says the study is a complex one and there are a number of alternative hypotheses that he has to consider as well as first language.

“A big confound with my study is the different styles of playing the people have learned. That can be emulating the style of a specific teacher, or whether you use vibrato on long notes or not. And I believe there exist different national styles of playing … so there seems to be a typical German style of playing versus a typical American style.”

Another issue is whether the player is an amateur or a professional. Matthias suspects that amateur players are more highly influenced by their first language, whereas professionals, who have practised and played for many thousands of hours learn to over-ride the learned motor memory of tongue positions from their first language.

Matthias has a website which explains his work in more detail, and he also collects every study he can find that to do with the study of music and language. If you are a brass player Matthias has a survey that he’d like you to take part in, regarding ‘brass players’ intuitions and experiences relating to language influence on brass playing’.

In this video you can see Matthias play the Ride of the Valkyries, and see what his tongue does as he plays: