We look in the sky and we see different cloud patterns on a different day and that’s what the ocean looks like, but we just don’t have the same amount of data to know what that variability is.
Joanne O'Callaghan, NIWA

Following a successful two-week deployment off the coast of the North Island, oceanographers were happy to see Manaia back aboard ship. The state-of-the-art ocean research glider, named in a public competition after the motif often carved into the figureheads of sea-going waka to give spiritual direction to the waka’s journey – is one of about 500 around the world, but the first and only one in New Zealand. 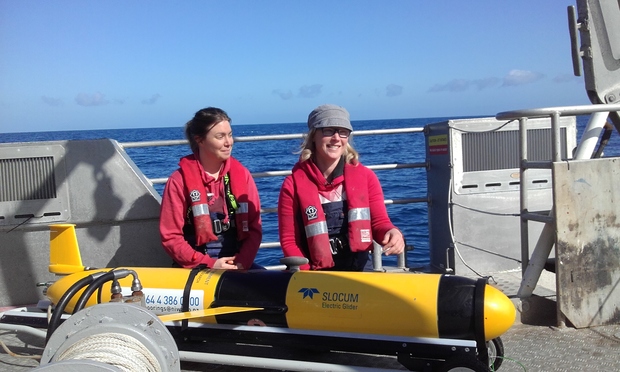 Joanne O’Callaghan, a coastal oceanographer with the National Institute for Water and Atmospheric Research, says the autonomous vehicle can be programmed and navigated from her laptop, where she also receives a signal each time it returns to the surface.

During its fortnight at sea, the glider travelled 500 kilometres, yo-yoing between the surface and a pre-programmed water depth and collecting data on temperature, salinity, oxygen levels and turbidity. It was set to call back every two hours to transmit the data – which was “exciting and nerve-racking” for the team. “It was amazing how quickly I got into the two-hour routine, day and night. It was a bit like waiting for a teenager to come home at night,” says Joanne. 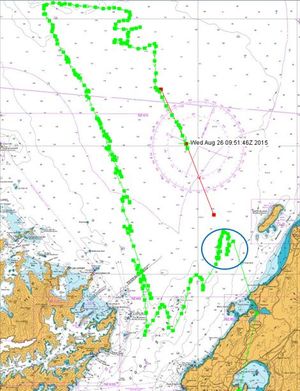 This map tracks the ocean glider during its two-week deployment. Photo: NIWA

Just like drones are increasingly used in land-based research, autonomous underwater vehicles, or AUVs, help researchers to collect continuous and multiple data sets over an extended period of time. Manaia’s focus will be on the waters above the continental shelf, in depths of a few hundred metres, which are not covered by any other technologies.

The key things we are trying to learn about is what the structure of the ocean looks like below the surface. We’ve had satellites circulating and giving us global maps of sea surface properties, but what we’re trying to understand from these sorts of technologies is what’s below the surface.

The glider carries a number of sensors to measure physical and biological properties, including one that measures fluorescence as a way of monitoring phytoplankton in the water column. “If we can tie them all back together we get an understanding of the biophysical coupling of ocean ecosystems, which has implications for understanding the food chain.”

Unlike powered submarines, the glider does not use a propeller to move through the water. It is driven by a buoyancy engine which allows it to glide up or down in the ocean. Its wings convert vertical displacement into horizontal motion, resulting in a saw-tooth dive pattern, at a speed of about half a knot. 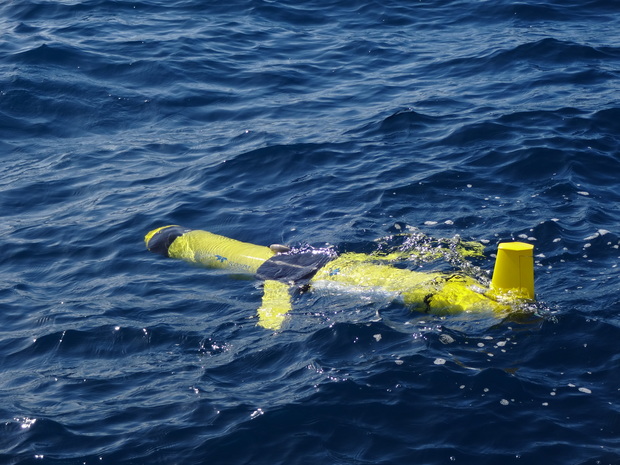 The autonomous ocean glider can be programmed to yo-yo between the surface and a certain depth. When it returns to the surface, it can make contact to transmit data to the research team. Photo: RNZ / Veronika Meduna

Later this year, the glider will be deployed again to explore the North-East Shelf of the North Island, between the Hauraki Gulf in the north and East Cape-Poverty Bay in the south.

The aim of this research programme is to understand how boundary currents and upwelling influence coastal productivity, biogeochemistry and ecosystem connectivity. The team has already anchored eight moorings to the seafloor that will stay in position for a year to collect information on the ocean’s flow and stratification, together with sediment traps that collect falling marine particles. The moorings will provide insights into how nutrients are formed and transferred between the ocean surface and the deep ocean. Manaia’s effort will complement the information gathered by the moorings.