Firing up the Plant Barbecue

Here’s one for the truly vegetarian. A barbecue styled on an Argentinian model for sizzling the perfect steak is being used to chargrill plants. But the aim is not to produce a gourmet dinner – rather, it’s to test the flammability of different plants.

“One of the key things we’re doing with this work is trying to identify native plants, especially, that might be useful to plant as green firebreaks … which help reduce the spread of fire.”
Tim Curran, ecologist, Lincoln University 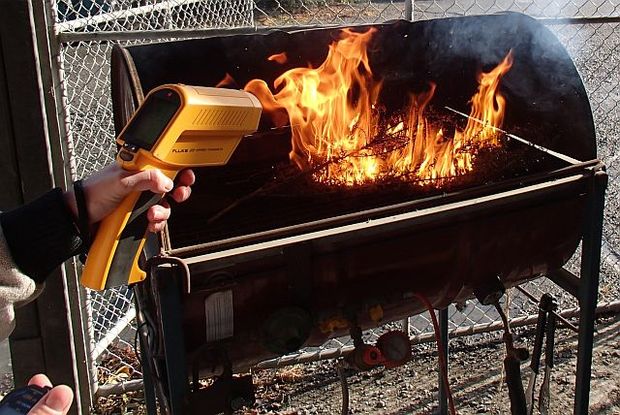 A laser thermometer reads the temperature as samples of plants are incinerated on the plant barbecue. Photo: RNZ / Alison Ballance 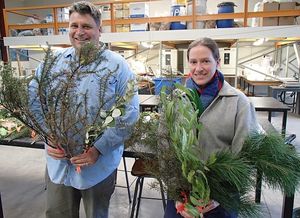 Tim Curran and Sarah Wyse with bouquets of native and introduced plants: they are testing the flammability of different species used in green shelter belts. Photo: RNZ / Alison Ballance

To date manuka, kanuka, gorse, broom, pine, Coprosma, hakea, silver beech and fivefinger, to name but a few, have been put to the blow torch – with some interesting results. Native silver beech is surprisingly flammable, while introduced broom has thick green stems that struggle to burn. Kanuka and gorse are both highly flammable, as are most early successional species.

In their current research project Tim Curran from Lincoln University and Sarah Wyse from the University of Auckland are testing shoot flammability. They select 70-cm shoots from a range of species and then burn them either on their own or as a ‘mixed grill’ of two different species. This allows them to measure the flammability of plants on their own but also in the kind of combinations that occur in real life when a highly flammable species may cause a less flammable species to ignite or vice versa. In one of the tests I watched the kanuka reached a sizzling 745°C, as measured by the laser infrared thermometer, and it burnt for more than a minute, while the broom it was with spluttered out after just a few seconds.

The only work previously done in this area in New Zealand was a qualitative survey of fire managers, carried out about 15 years ago, which resulted in a ranking of species by flammability. This current project is empirically testing that ranking in an effort to improve it. 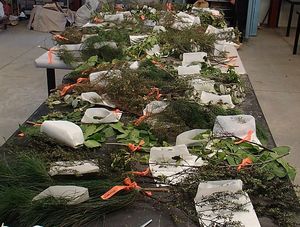 Sarah says that there has been a surprisingly good correlation between the expert opinions and the current tests, with a few exceptions. “Kauri, flax and ake ake aren’t as flammable as the ranking suggested they would be, whereas rimu and silver beech were more flammable than we expected.”

Tim says the implications of this are interesting: a long drought on the usually wet West Coast could result in much more intense forest fires. And climate change scenarios point to hotter drier windier weather in some places which could have consequences for fires in different ecosystems.

Although we don’t tend to think of New Zealand as having a strong history of fire, this is due more to the kind of weather we experience than having plants that are fire resistant. Lightning is a big cause of natural fires, but lightning storms here are often accompanied by heavy rain. Before humans settled New Zealand lightning and volcanic activity were the two main causes of fire, but the main cause for the past 750 years has been deliberate burning by humans.

Fortunately New Zealand fires don’t tend to be as large or as destructive as those in other parts of the world.

“One of the things that drives the very intense fires you get in the western United States and in Australia is extreme fire conditions – very dry conditions, maybe a drought for several years," says Tim. "There may not have been a fire through there for quite a while, so there’s been a build-up of fuel. You get all of those things combined and you get some really dangerous fire weather and you’ll get what’s known as a crown or canopy fire … and they’re the most dangerous ones and also the most destructive.”

Our Changing World has previously spoken with Grant Pearce from Scion about fire research in New Zealand.

A recent paper in the journal PLOS ONE suggests that fires set by a small Polynesian population in New Zealand about 750 years ago may have caused fire-vulnerable forests to shift to shrub land over decades, rather than over centuries, as previously thought.