Junk Food: plastic pollution is a growing threat to seabirds

A new study on seabirds and plastic rubbish gives a new meaning to the term ‘junk food’. New Zealand is well known for being the world’s seabird capital, with 10% of all seabirds on the planet breeding here. What’s less well known is the enormous – and rapidly growing - threat that plastic rubbish in the ocean poses to them. 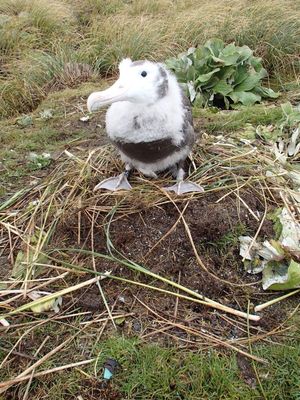 A Gibson's wandering albatross chick, on Adams Island in the Auckland Islands group - there is a piece of bright green plastic lying in the foreground amongst the regurgitated squid beaks Photo: RNZ / Alison Ballance

Seabirds eat the plastic, after mistaking it to for food, and it can block or rupture their gut, or lead to poisoning caused either by toxins in the plastic itself or by chemicals that the plastic has absorbed.

The research, published in the Proceedings of the National Academy of Sciences, also says that the problem is worst, not in tropical gyres such as the Pacific’s great garbage patch which are known to accumulate vast amounts of plastic rubbish, but rather in the southern ocean, where plastic pollution is less but seabird numbers are at their highest.

Lead researcher Dr Chris Wilcox from CSIRO in Australia says the study’s key findings are summarised in the paper’s title: ‘Threat of plastic pollution to seabirds is global, pervasive and increasing.’

“When we analyse all the data we find, essentially, that plastic is in the majority of the world’s seabirds, whether you think of that that by individual birds or by species,” says Dr Wilcox. “And that appears to be growing.”

Worldwide plastic production has been doubling every 11 years, and in places the amount of plastic pollution has reached more than half a million pieces per square kilometre of ocean. Plastic debris concentrates in five large tropical ocean gyres, such as the well-known Pacific garbage patch. But surprisingly the study has found that the highest risk to seabirds from plastics actually occurs in the southern ocean. 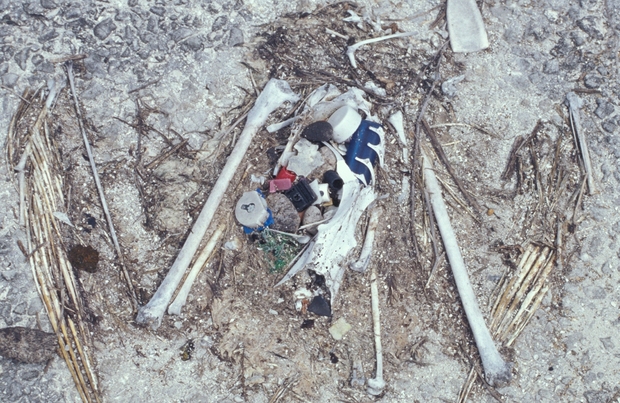 Many Laysan albatrosses die from ingesting large amounts of plastic; they breed on Midway Atoll in the Hawaiian Island chain, close to the floating garbage patches in the tropical Pacific. Photo: Forest & Kim Starr CC BY 3.0

“We found the most birds affected along a band at the edge of the Southern Ocean, so at the bottom of the Atlantic, the Pacific and the Indian oceans,” says Dr Wilcox. “And that pattern is driven by the fact that although there’s lots of plastic in the garbage patches there aren’t that many species there. The highest bird species richness is in the Southern Ocean. Essentially the Tasman Sea between Australia and New Zealand turned out to have the highest predicted number of species affected … The birds that occur in that area are particularly prone to ingesting plastic, so that’s shearwaters and other allied species.”

The study has come up with some alarming figures: extrapolating forward from old data the researchers suggest that 90% of birds are ingesting plastic at the moment and they expect that figure to rise to 99% by 2050.

Co-author Dr Denise Hardesty from CSIRO Oceans and Atmosphere says seabirds are excellent indicators of ecosystem health. “Finding such widespread estimates of plastic in seabirds is borne out by some of the fieldwork we’ve carried out where I’ve found nearly 200 pieces of plastic in a single seabird,” she says.

“I think what was a surprise was the fact that the risk is really related to seabird density and occurrence, and not the amount of plastic,” says Ms Baird. “So the fact that the Tasman Sea came out as an area of high risk is of great concern to us, particularly as a number of our seabirds feed in the Tasman.”

Dr Graeme Elliott from the Department of Conservation has been studying wandering albatrosses on New Zealand’s subantarctic islands for more than 20 years. He says that bits of plastic are a common sight around the birds’ nests.

“For our birds, particularly the Gibson’s wandering albatross from the Auckland Islands, the Tasman Sea is the main place they go to feed while they’re raising their chicks,” says Dr Elliott. “The stuff we see is mostly small, so we see a lot of bottle caps, so they’re obviously picking up this stuff at sea, and bringing it onshore to feed their chicks, along with the squid and fish that they feed the chicks.”

Dr Elliott also reports that albatross chicks about to fledge and fly regurgitate the contents of their crop; this usually includes a number of squid beaks, and surveys of many of these over a number of years have shown that about one in four of these contain pieces of small plastic, many of which are blue. 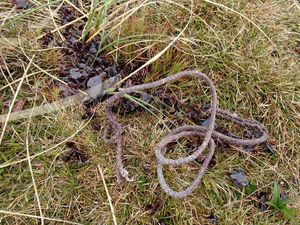 A piece of cord, swallowed and then regurgitated by an adult wandering albatross lies amongst squid beaks, on Adams Island. Photo: RNZ / Alison Ballance

Seabird expert Graeme Taylor from the Department of Conservation says that the different lifestyles of seabird species means they are not equally susceptible to plastic. “Birds that dive deeply for live prey are going to eat less plastic than those that pick at prey items on the surface,” he says. “Prions and storm petrels eat fish eggs and salps, and so they confuse plastic beads with these prey items. Diurnal feeders that eat krill in swarms will eat more plastic than seabirds that feed more often at night on bioluminescent prey or those species that eat larger prey items like fish or squid. None of these things seem to be considered in the paper.”

Graeme Taylor says he is surprised that the Tasman Sea comes out as such a high risk area. “What surprised me the most was the Laysan albatrosses, Phoebastria, didn’t show up as having high ingestion rates in the model. The large numbers of chick corpses I saw on Midway Island in the 1990s with plastic filled stomachs suggests this group of seabirds are exposed to higher plastic mortality rates than most other seabird species that I am aware of.”

The study authors say that producing and using less plastic and having more effective  waste management could help reduce this growing threat to the world’s seabirds, many of which are threatened from other causes such as predation, fishery by-catch mortality and climate change.

Graeme Taylor says that although he has reservations about the paper, its value is in demonstrating that plastic debris in the ocean is increasing at a great rate over time and more seabird species and individuals will get exposed to this increasing floating garbage heap.

The work was carried out as part of a national marine debris project supported by CSIRO and Shell’s Social investment program as well as the marine debris working group at the National Center for Ecological Analysis and Synthesis, University of California, Santa Barbara, with support from Ocean Conservancy.