Traditionally, bridges have been built entirely on site, which is a time-consuming and difficult process, but a new generation of bridges are having their component parts made in a factory before being quickly assembled where they’re needed. 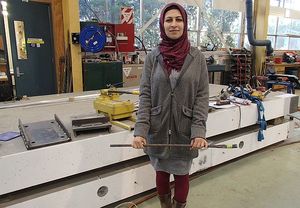 Engineering student Zeinab Chegini holds a short length of the wire cable that is used as a post-tensioning tendon. The tendons run the 10-metre length of each of the concrete slabs behind her, that make up the bridge superstructure. Photo: RNZ / Alison Ballance

Royce and fellow student Zeinab Chegini are part of a team of earthquake engineers at the University of Canterbury working on a programme called Advanced Bridge Construction and Design (ABCD), funded through the Natural Hazards Research Programme.

Replacing or retrofitting bridges is a big part of the Christchurch rebuild – following the damaging Canterbury earthquakes of 2010 and 2011 about 140 of the city’s 225 road and foot bridges were damaged. As well, other short-span bridges around the country are nearing the end of their life and will soon need replacing.

Zeinab says that one of the big challenges is that while a bridge is being worked on the road is out of commission – so, the faster the job can get done, the less disruption there is for road users.

Zeinab describes a typical New Zealand short-span bridge as being made of a superstructure – the deck which holds the cars and pedestrians – and the substructure, which comprises the abutments, the cap beam, the pier, and the foundations and piles. She works on the superstructure, and has been testing a 1:3 scale model that is almost 10 metres long and 2.5 metres wide, making it one of the largest bridge building tests carried out in the southern hemisphere. The testing took place in the structures extension laboratory at Canterbury University which has a strong floor and columns to enable large, heavy tests like this.

Zeinab Chegini (left) points to the elastic tendon running the length of the superstructure of a model low-damage bridge; in real life these post-tensioning tendons are made from steel cable. Royce Liu (right) is pointing out his area of interest, where the bridge pier sits on the foundation. Photo: RNZ / Alison Ballance

The superstructure that Zeinab is working on is a low damage rocking superstructure.  She explains that earthquakes can act like a lateral load pushing against the superstructure, and in a simply supported bridge, where the deck just sits on top of the pier, the shaking can displace it or in extreme situations cause it to fall off.

“We’re trying to connect the superstructure elements together using post-tensioning tendons. These tendons act like an elastic band to hold the components together.”

The tendons are seven high-strength wires wound together to form a cable. They are attached to the abutments at each end, and run the length of the deck sections. Although Zeinab says the cable is very stiff it’s also very long, about 10-11 metres long, and this provides enough flex for the pre-cast deck sections to move slightly during an earthquake. The tendons then reposition the bridge as they return to normal after the shaking has stopped.

The quasi-static testing of the scale model was carried out using hydraulic rams that could push and pull the bridge back and forth by about 75 mm, allowing Zeinab to collect information on the force and displacement, and how the bridge behaved. She is now analysing this data to see how effective the post-tensioning tendons are.

Royce’s work is focused on the pier. 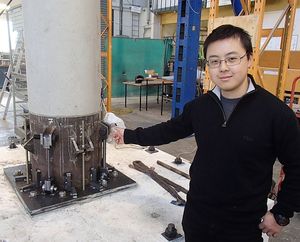 Canterbury University engineering student Royce Liu points to the dissipaters, which act like fuses and join the pier to the foundation block. Photo: RNZ / Alison Ballance

During his quasi-static testing the load is applied to the top of the pier. His pier is separate from and sits on top of the foundation block. There is post-tensioning running through the pier to hold everything together, while a series of dissipaters, which act like fuses, join the pier to the foundation block. These dissipaters allow the pier to rock back and forth during earthquake shaking. Royce says dissipaters are not new, but he is testing a system that uses two disspaters rather than one. During an average earthquake just one set moves, and the second set is available as a back-up for a rare large earthquake. The dissipaters help the pier and steel tendons retain their integrity, and can be easily replaced after an earthquake if necessary.

“In traditional construction we have the steel on the inside of the bridge pier, and that steel gets damaged by the force of the earthquake. What we’ve done here is we’ve brought that steel to the outside so we can see any damage and be able to replace it very easily. This reduces the amount of down time as the bridge is repaired.”

Bridge design is one of the strengths of the College of Engineering at the University of Canterbury. Our Changing World has previously featured the College’s annual student bridge building competition, in which Alessandro Palermo challenges students make bridges using just MDF and glue.

Fellow student Mustafa Marshall has made videos showing quasi-static testing of his bridge in the structures lab.