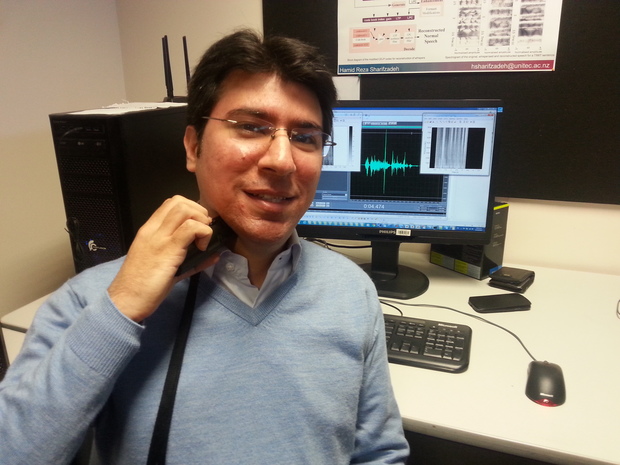 Hamid Sharifzadeh demonstrates the use of an electro larynx. Photo: RNZ / Ruth Beran

Our voice is a big part of our identity and losing it through disease or an accident can have a big impact. Current technologies to help people who have had their larynx removed are limited and often sound robotic, but Hamid Sharifzadeh, a computer scientist at Unitec, has developed an algorithm that can reconstruct the natural sound of speech from a whisper.

The larynx acts as an amplifier, and with its removal the power of projection is gone. The current options are limited to the use of an electro larynx, a device that is held against the neck to transmit vibrations through a buzzing sound, or surgery that replaces the larynx with a valve. In both cases the regenerated voice sounds monotonous, and the valve carries a risk of infections.

A person without a larynx can still form words though, even if their voice is reduced to a whisper – and a whisper is all Hamid needs to work with. He has created an algorithm that can reconstruct the natural sound of speech, and if a pre-operation voice sample is available, it can reproduce a person’s natural voice.

The Voice Back device will consist of a small microphone the user can hold to their mouth and a small speaker that can be worn on the hip or shoulder.

Jacqui Allen is the medical director of Auckland Voice and Swallow, a center that specialises in the diagnosis and management of all voice disorders. She says about a third of the workforce depends on voice for their job, and it is an important part of a person's identity. She says the device Hamid's team developed reconstructs voice in a way that sounds much more natural and gives the listener a chance to pick up more than just the words, including a sense of emotion.

She expects that her patients will welcome the development of the new device.

Your voice says a lot about yourself. It's how people identify you. And so the more like yourself you sounds and the more that you can respond emotionally with your voice, the more closely that represents our normal form of communication.

Apart from returning the gift of speech to people affected by voice disorders Hamid and his team also have plans to develop a mobile phone app that would allow people to whisper in their phones, while the person at the other end can hear their voice loud and clear.