Parks and forest remnants are becoming increasingly important aspects of urban planning, and Kiri Cutting, a PhD student at Waikato University, is interested in working out how cities can improve and better maintain their green areas. 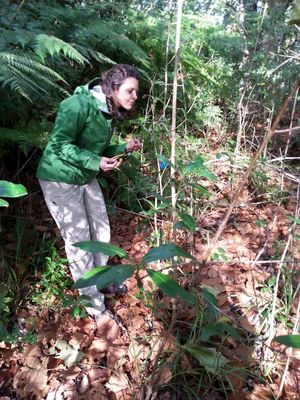 Kiri Cutting, taking environmental data in Glenpark Avenue Reserve in New Plymouth. This research site has a mostly non-native tree population, and the data is compared to nearby sites which have been restored with native trees. Photo: RNZ / Ruth Beran

Kiri chose three different sites in New Plymouth, New Zealand’s greenest city, which still has fragments of original native forest within its urban landscape. The study sites include such forest remnants as well as parklands that have been restored and replanted with native plants, both of which she finds off the Huatoki walkway. At the Glenpark Avenue Reserve, she studies an area that has been left to regenerate by itself and is dominated by exotic plane trees.

She says she is interested in studying the ecological complexities of urban forest fragments that have never been degraded and to figure out how to make urban restoration projects more successful. To get an idea of the ecology of each site, Kiri has been measuring soil moisture, air temperature and humidity, and how much leaf litter accumulates on the ground.

“Leaf litter is immensely important in the life of a forest. It forms an insulating blanket on the ground, allows native plants to regenerate, and if seeds drop into it, they germinate and are protected.

Kiri says she’s been finding that “in sites where restoration plantings are very young, and the sites are very open and the plants aren’t very big yet, there’s hardly any leaf litter and regeneration of native plants takes a little longer because there’s no nice nursery for the seeds to germinate in”.

All the data is compiled into a modelling equation which relates the different parameters to each other. “Eventually this becomes applied when we can say things and make predictions about these sites that allow us to manage them better.”

The data gathered at the New Plymouth sites provide a benchmark in comparison with other sites from Hamilton, which has fewer green urban spaces. “The two cities are far apart on the spectrum of forest cover. Hamilton has 2.5 per cent of its original forest left, New Plymouth has 8.5 per cent, so that is an interesting comparison for this study because connectivity [between park areas] is really important. Connectivity can change the dynamics and affect the restoration success.”

The first results from the study show a clear connection between the age of a site and the density of the canopy.

As trees grow, the crowns close in and produce the canopy roof – and that prevents sunlight from getting to the forest floor and keeps weeds out. We’re finding that it takes 15 to 20 years for that to happen, but then weed control can be reduced.

Kiri says urban tress have many benefits. “They clean our water and air, they reduce noise pollution and abate flooding, and they help reduce stress.”