Testing Volcanic Ballistics with a Cannon and Catapult

In a world-first, geologists are using a medieval siege catapult, or trebuchet, to hurl projectiles made from silly putty wrapped in condoms. The comic sounding experiment is part of a serious project gathering information on the behaviour of volcanic ballistics that will be used to improve New Zealand’s volcanic hazard modelling.

The video shows a rubber ball filled with sand as it is fired from the trebuchet, arcs up through the air and lands about 80 metres away 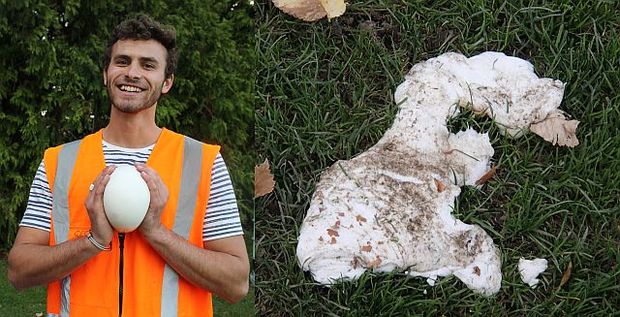 George Williams holds an analogue lava bomb, made from silly putty enclosed in a condom (left). After being fired from the trebuchet the silly putty ballistic spun in mid-air and then landed like a cowpat (right). Photo: RNZ / Alison Ballance

On 6 August 2012, a phreatic (gas and steam driven) eruption took place at the Upper Te Maari Crater on Mount Tongarairo, in the central North Island. The Te Maari crater had erupted a few times between 1855 and 1897, and was then inactive until August and November 2012.  During the August 2012 eruption volcanic ash and thousands of blocks and lava bombs were fired out of the volcano, and the damage from the ballistics covered an area of 6 square kilometres. Several blocks went through the roof of the Ketetahi Hut, which was fortunately unoccupied. As the eruption occurred during bad weather in the middle of the night there were luckily no people walking the popular Tongariro crossing.

In November 2012, Upper Te Maari Crater on Mount Tongariro had a short eruption which spread ash and ballistics around the crater. A more damaging eruption in August 2012 covered a much larger area

Geologist Ben Kennedy holds a sand-filled rubber ball that has just been fired over 80 metres by the trebuchet. Photo: RNZ / Alison Ballance

For her Master’s degree PhD student Rebecca Fitzgerald carried out an assessment of ballistic hazard and risk from the Upper Te Maari crater eruption. She used aerial photographs to identify 3,587 impact craters with a mean diameter of 2.4 metres, but when she combined this information with ground surveys, which allowed her to find much smaller impact craters, she estimated that approximately 13,200 ballistic projectiles had been thrown out during the eruption at an average speed of 200 metres per second. She also modelled the risk of serious injury or death to walkers along the Tongariro alpine crossing during this size eruption, and found that in some places on the track the probability of death was 16%. Her modelling also showed that a larger eruption had a much higher – up to 100% - risk of death.

Rebecca is building on her Master’s research for her PhD, and will be travelling to Japan to map ballistics from the September 2014 Mount Ontake eruption in which 57 people were killed. She says “I’ll also be doing more numerical modelling as this will allow us to look at future eruption scenarios.” This work will include identifying potential ballistic hazard zones in the Auckland volcanic zone. 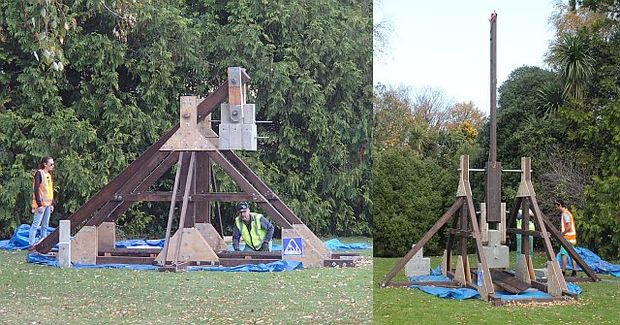 The trebuchet, a 4-metre high medieval siege catapult, is in a cocked position ready to fire (left) and (right) the arm is extended vertically after it has fired and flung the ballistic. Photo: RNZ / Alison Ballance

During the test run, the team had two missiles to test with the trebuchet. One was a rubber gym ball filled with sand, and the other was “a more realistic analogue material,” according to Ben, “which is silly putty wrapped in a condom. Silly putty has similar properties to magma in that its visco-elastic. Everyone know that silly putty bounces if you throw it on the floor but if you leave it there it’ll just spread out slowly. Hopefully it’ll represent the behaviour in flight of volcanic bombs, which are also visco-elastic.”

Ben says depending on the type of volcano and the type of eruption, a range of projectiles ranging in viscosity or stickiness from “snot dribbles’ to solid blocks several metres in size can be thrown out. Future plans for the trebuchet include doing a systematic study of viscosity in different sizes and under different conditions. 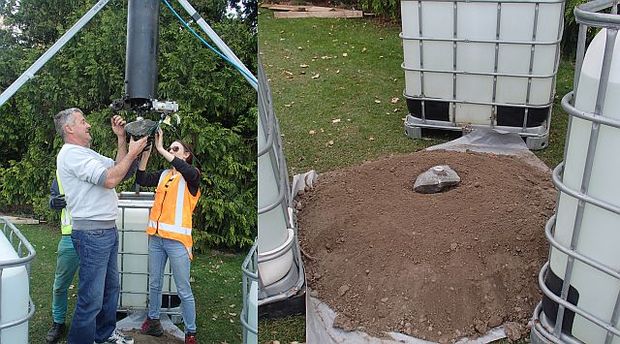 Cannon-builder Pete Jones and Rebecca Fitzgerald with the pneumatic cannon (left) that fires a rock towards the ground using compressed air. The rock made a small crater as it impacted (right) - the water-filled bladders prevent the cannon lifting off the ground as it fires Photo: RNZ / Alison Ballance 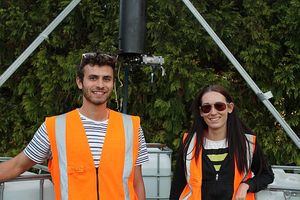 Masters student George Williams will test various roof and wall constructions by firing ballistics from the vertical cannon, while PhD student Rebecca Fitzgerald is interested in measuring the impact and craters of different kinds of ballistics. Photo: RNZ / Alison Ballance

As well as the trebuchet, the team are running a second set of experiments using a vertical cannon that fires rocks down towards the ground. The cannon has been made out of a piece of old drilling pipe. It works using pressure created by compressed air, and is capable of firing rocks weighing up to 8-10 kg at 100 metres per second. In a real eruption rocks can be blasted out of the vent faster than the speed of sound, at 400 metres per second. They then slow down as they travel, but can speed up again as they begin to fall, which makes ballistic modelling very complex.

Rebecca plans to use the cannon to build a relationship between the size of the ballistic, the speed it is fired at, the size of crater it creates and whether it fires out any shrapnel. She will be able to relate this information to craters she has mapped in the field.

Masters student George Williams is using the cannon to fire rocks against common roofing materials such as corrugated iron. He has collected various roof and wall materials from demolished buildings in Christchurch, and explains that “what we’re doing is calculating the impact energy required to cause different amounts of damage to different building materials. We’ll be testing, for example, whether a small rock moving fast is able to puncture through more than one that’s moving with the same energy but is big and slow. We’ll also be using silly putty.” The team are particularly interested in reinforced concrete, which is the material that volcanic shelters are built from, and say that this is the first time work like this has been carried out.

The pneumatic cannon is powered by compressed air, and the three tonnes of water in the large plastic tanks are to prevent it from taking off as it fires. The first rock is fired out at about 30 kilometres per hour while the second is at about 70 km/hr - these speeds are much slower than occurs during a real volcanic eruption

What To Do During An Eruption

What’s the best advice if you’re caught in an eruption that is firing out ballistics? Rebecca says that all the evidence to date from eruptions like Mount Ontake in Japan is that most people are killed from injuries sustained to their backs and necks as they run away.

“You want to make sure you watch where the ballistics are coming from and move away from that area,” says Rebecca.

Ben stresses that you should seek shelter if you can. “I had a conversation with the military recently, and their advice was that if there are lots of objects falling around you make yourself as small as possible, and try and shelter behind a large block or something solid.”

If there are fewer objects falling then Ben advices keeping an eye on the sky, and watching individual objects that seem to be falling towards you so you can step out of the way as it lands.

“We call it an auk step. There’s a bit in Lord of the Rings where there’s a big bit of concrete coming at an auk and he just moves to the side,” says Rebecca.

In this video, shot by Alistair Davies, the trebuchet is in the far distance, in the corner of the field. The trebuchet fires and then about 18 seconds into the video you can see a small dot appear which is the sand ball rising against the blue sky and then the white cloud before beginning to fall, then bounce and roll across the grass after it lands.

Our Changing World has previously featured stories on the Taupo Volcanic Zone and volcanic hazard planning:

And Brad Scott takes Alison Ballance around the Waimangu Valley near Rotorua, which is one of a number of volcanic monitoring sites in the Taupo Volcanic Zone