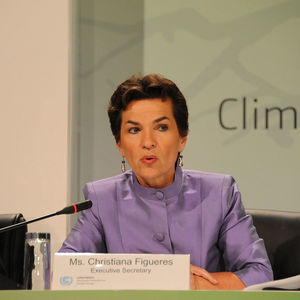 United Nations climate chief Christiana Figueres expects that a global and legally binding agreement will emerge from a climate summit in Paris later this year, but she concedes that the commitments countries have made so far fall short of keeping temperature rise below two degrees.

The UN Framework Convention on Climate Change (UNFCCC) summit will be held in Paris in December, and 196 countries will come together to nut out a new climate change agreement to set the world on a path to taming global greenhouse gas emissions.

Fifty countries, including New Zealand, have already submitted their national targets (pdf) ahead of the negotiations, but Ms Figueres says the sum total of these commitments, known as Intended Nationally Determined Contributions, is still above “what we should have in order to stay underneath the limit of two degrees”.

Ms Figueres says keeping temperature rise globally below two degrees is an important goal because “anything other than that does not give any chance of survival to the most vulnerable”.

She says she is certain the Paris meeting will achieve a legally binding agreement that includes all countries, but it will be just the first step.

“This agreement is more like building a very broad highway that has many different lanes in it, whereby some countries will get in the fast lane, some countries will get in the slow lane. It is a very broad highway where everyone will slot themselves into a particular pace … but it is a highway that goes in one direction towards climate neutrality and towards restoring the ecological balance between greenhouse gas emissions and the natural absorptive capacity of the planet.”

Each country’s commitment will become the baseline, and they will have to return to the negotiating table to increase their target over time. “Whatever you are putting in now is the floor and you are not allowed to go back down below that. It is a very important principle that has already been agreed to.”

The Paris summit is the 21st annual UNFCCC Conference of the Parties (COP21), and Ms Figueres says she is confident it will succeed because of several recent changes.

“Renewable technology has come down in price remarkably. Solar is down by 80 per cent in cost since 2009, wind is down in cost and efficiency in both has gone up. Combined with investments in battery storage, renewables are now truly competitive with fossil fuels even for grid-connected electricity.”

She says investment flows are also increasingly going towards renewable energy and “the markets are definitely beginning to understand the risks on not acting on climate change”.

Victoria University climate scientist James Renwick agrees that political will to act on climate change is on the rise, but he says the description of the COP21 meeting as the first stop on the "zero-carbon highway" is overly optimistic.

"It makes it sound as though we have ample time to get on top of emissions reductions."

He says the latest Intergovernmental Panel on Climate Change (IPCC) report shows that the only future scenario that could keep us below a two-degree warming is the most ambitious pathway, which requires fast and radical reductions of greenhouse gas emissions.

Beyond about 2070 we need to be actively removing carbon dioxide from the atmosphere, using technologies that have not yet been developed. Global emissions have risen 31 per cent since 1990 so this represents a major turn-around that needs to happen pretty urgently. If we start today, reductions of 1.5 per cent per year from today’s emissions would have us on track. The longer we wait, the steeper the average annual reductions need to be.

Former climate change ambassador Adrian Macey says the New Zealand government has not yet made the change to a long-term transition pathway of our economy and the 2030 target looks modest.

"It is highly hedged with conditions about future access to action by others, carbon markets, forestry rules etc. This delays certainty about our domestic direction since it will be ages before we know the answers to all these points - at least three years I would say.

"It contains no sense of our long-term pathway to carbon neutrality or a low-carbon economy and there is scant attention given to the possible, indeed likely, benefits to New Zealand of this transition."