The North Island brown kiwi has just joined kea and rifleman in an exclusive club – birds that have had their entire genome sequenced.

There are 10,000 or so species of birds worldwide, and the genomes of just 50 of those have been worked out. That three New Zealand birds are amongst the 50 is testament to how unusual our avifauna is.

The work, 'Kiwi genome provides insights into evolution of a nocturnal lifestyle' has just been published in the journal Genome Biology by a team of German and Australian researchers. What they have found in the genes confirms that kiwi are pretty much colour blind, but are super-sniffers when it comes to smell.

This infrared video of a male North Island brown kiwi calling was recorded by Dr Isabel Castro and her team.

Conservation genomics researcher Dr Tammy Steeves at the University of Canterbury says that bird genomes are much smaller than mammal genomes, but that the kiwi genome is one of the largest bird genomes.

“Bird genomes are usually about a third of the size of the human genome, and that’s one of the things that makes them so fascinating,” says Dr Steeves.

“They’re very compact and they don’t have a lot of what we call repetitive elements or repeating DNA sequences, and they’re also highly conserved, so even when we look across very distantly related birds they have very, very similar genomes.”

There are five species of kiwi in New Zealand, and they belong to a group of flightless birds known as ratites, which includes the extinct moa as well as ostriches, emus, cassowaries and rheas.

Genetics and genomics researcher Professor Neil Gemmell, from the University of Otago, says the publication of the North Island brown kiwi genome is significant.

“It’s a pretty major achievement,” says Prof Gemmell. “Kiwi genomes are a little bit bigger than most bird genomes. It’s the first kiwi genome sequenced in its entirety, and I think it’ll be a really useful resource for future kiwi research in New Zealand.” He says it should also improve our understanding of how kiwi fit into the ratite group of birds. 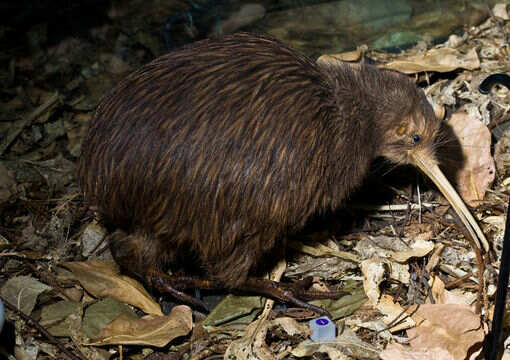 The North Island brown kiwi is one of five species of kiwi, and the first to have its genome sequenced Photo: SUPPLIED

he researchers of the North Island brown kiwi genome were particularly interested in investigating the genetic components of the bird’s unusual flightless, nocturnal behaviour, especially their olfactory receptor genes and their vision receptor genes.

“We know that kiwi have poor eyesight – they have some adaptations for nocturnal viewing but their sense is quite under-developed,” says kiwi ecologist Dr Isabel Castro from Massey University.

A previous study had identified a number of olfactory receptor genes in brown kiwi, but this new research has added to that tally.

“What this new group is doing is a more advanced way of looking at it,” says Dr Castro.

“We already knew that kiwi had a lot of olfactory receptor genes, but [what the new study reveals is] that they might be more sensitive to more smells than we ever thought before.”

While brown kiwi had similar genes for black and white vision to other vertebrates, the researchers identified mutations in the blue and green vision receptor genes that rendered blue and green colour vision absent.

Still no answers for why kiwi lost flight

The German and Australian researchers estimate that kiwi adapted to a nocturnal lifestyle about 35 million years ago (30-38 million years), soon after the then-flighted birds flew to New Zealand.

While the team also investigated the genes involved in limb development, they weren’t able to draw any conclusions about when kiwi lost their wings.

As far as on-the-ground conservation management of this threatened species goes, conservation genetics expert Dr Helen Taylor, from the University of Otago, says the sequencing of the brown kiwi genome doesn’t mean much immediately.

“But it does mean that we’re making progress towards being able to get large-scale genetic data sets for [all kiwi species] more easily and more cheaply. It will act as a guide for doing genotyping by sequencing across North Island brown kiwi and across other species of kiwi as well," she says.

"And the nice thing about those techniques is that it allows us to get really high resolution genetic data so we can make better decisions about what genetic diversity they have, what population structure there is and these kinds of things are very helpful for informing good conservation management.

“These are things we can address with current genetic tools... But what genomic tools mean is we can get at this data in a much more high resolution way and get much more accurate answers.”

Prof Gemmell says that, with the brown kiwi genome now sequenced, it should be easier to do the others.

"You’re not trying to assemble things from a blank slate... You’re working from a framework where you can actually take the sequences you generate form the other kiwi species and you align them against that matrix.”

More bird genomes on the way

The genomes of a number of New Zealand birds are being worked on at the moment – among them little spotted kiwi. This work is focusing on the transcriptome of the little spotted kiwi and is being led by Dr Kristina Ramstad at Victoria University of Wellington.

Prof Gemmell and Dr Steeves both expressed disappointment that no New Zealand-based researchers were involved in the work.

“It certainly doesn’t matter from the quality of the science,” says Dr Steeves.  “The science is very good and it’s very exciting. And what I would like to see moving forward, particularly on the conservation front, is that we see the involvement of local expertise.”

She says when it comes to kiwi conservation management it is important to involve all the stakeholders, which includes the Department of Conservation and local iwi and communities.

A brief history of genome sequencing