Sea Urchins and Their 'Landscape of Fear'

Views inside and outside a marine reserve: 'kina barrens' (left) marked by lots of sea urchins and an absence of kelp are a common sight in the Hauraki Gulf, whereas inside fully protected marine reserves (right) kina barrens are replaced by good numbers of predators such as crayfish and snapper. Photo: Paul Caiger

“Fear is causing them to be more cryptic. It’s a really cool result. Predators don’t actually have to be having a direct effect on the sea urchins to potentially limit how much kelp they graze.”
Arie Spyksma, Leigh Marine Laboratory

When wolves were re-introduced into Yellowstone National Park in the United States, the park’s vegetation began to rapidly change. And it wasn’t that the wolves were eating all the deer – it was that the mere presence of the wolves was causing the deer to spend more time hiding in the forest, and less time out in the open eating grass.

Ecologists call this the 'landscape of fear’, and University of Auckland PhD student Arie Spyksma wonders if the same thing could be happening closer to home – but with sea urchins instead of deer, and snapper and crayfish rather than wolves.

This time-lapse video was made by Arie Spyksma as part of his research. For the first 4 seconds you see a crowd of sea urchins behaving normally. Then, after a white perforated pot containing some crushed sea urchin is introduced, many urchins react to the smell by moving away from the pot. At the same time a number of fish come in to investigate the pot. Arie says the crushed sea urchin is a proxy for a sea urchin being eaten by a crayfish or snapper, and is a way of seeing how the urchins react to their predators. The metal poles and fluttering tape at the left and right of shot are the legs of the tripod holding the time-lapse camera. 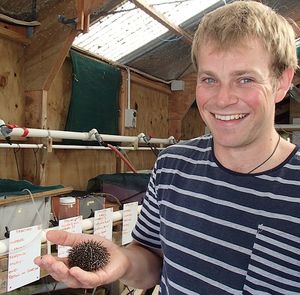 Arie has been comparing the behaviour of sea urchins, or kina (Evechinus chloroticus) both inside and outside two marine reserves – the Leigh, or Cape Rodney to Okakari Point marine reserve, and Tawharanui marine reserve. In unprotected areas of the Hauraki Gulf ‘kina barrens’ are a common feature – over-fishing results in low numbers of popular species such as crayfish and snapper, both of which are key predators of sea urchins. As a result, the numbers of sea urchins builds up, leading to the over-grazing of the common kelp, Ecklonia radiata. What happens in a fully protected marine reserve once fishing is prohibited is that snapper and crayfish numbers recover, sea urchin numbers go down and at the same time the kelp also begins to recover.

“There’s a theory known as the trophic cascade theory,” says Arie. “When predator numbers are high they can effectively control herbivore numbers - so herbivores like the sea urchin – which keeps their numbers in check and means that they’re not over-grazing the kelp, and it keeps the ecosystem in a good balance. If those predators are removed then the herbivore populations will explode, they’ll over-graze and then you’re left with a reef that’s got no kelp on it, has got low coralline and turfing algaes, and isn’t as productive and can’t hold as many species.” 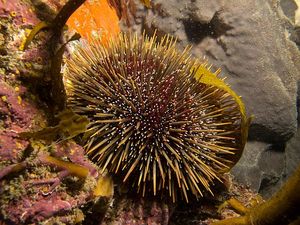 Sea urchins, or kina, eat mainly kelp, but have also been observed eating sea squirts and even an old rag. Photo: Paul Caiger

The main idea behind the trophic cascade theory is that it is direct interactions between the predators and their prey i.e. the predator eats the prey species and removes it. What Arie is investigating is a growing idea that the indirect effects of predators may be as, if not more, significant.

“By causing the urchin to fear for its life and stay hidden or cryptic, the urchins are not going to be out on the reef as much and therefore might not graze the kelp as much,” says Arie.

Arie has carried out his research both in the field and in the lab at the Leigh Marine Laboratory. To begin with he compared the size and behaviour of sea urchins inside and outside the marine reserves. He observed that the smaller population of urchins inside the marine reserve were more cryptic and spent much more of their time hiding, compared to those outside the reserve which spent much more time out in the open, even when they were quite little (just 40 mm in size). 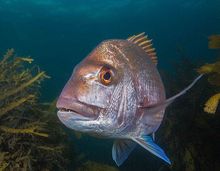 Large predatory snapper are a rare sight in the Hauraki Gulf these days due to heavy fishing pressure, but they are common inside marine reserves such as the Goat Island marine reserve at Leigh. Photo: Paul Caiger

However, this could have been either because they were hiding from greater numbers of predators in the marine reserve, or that there was simply more food in the reserve so they didn’t have to spend so much time looking for it but could rely on drift algae coming to them as they hid.

To tease those two possibilities apart Arie ran some experiments in the lab, exposing sea urchins to the smell of crushed sea urchins that he hoped would “mimic another sea urchin somewhere in the area being attacked.” He also created scenarios with and without lots of kelp being washed around the tank.

“Then for about  three weeks I’d get up every four hours and go and see what the urchins were doing” says Arie. “So by the third week there was a very clear separation between the groups of urchins with and without predator cues. When predator cues [the crushed sea urchin] were present a much higher proportion of the sea urchins were cryptic on a daily basis, and this was regardless of whether there was food present or not present.”

So, Arie concludes, it seems that ‘fear’ of predators was shaping how urchins behaved in the lab, and subsequent work he has done back out in the field, filming how urchins react to different cues (crushed fish versus a crushed sea urchin, for example) certainly backs up this result. Our underwater world, then, really does seem to be a ‘landscape of fear.’ 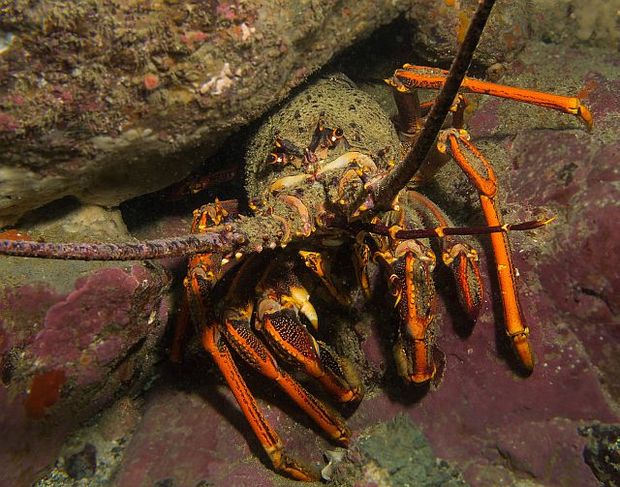