Cleaning Up Our Coastlines 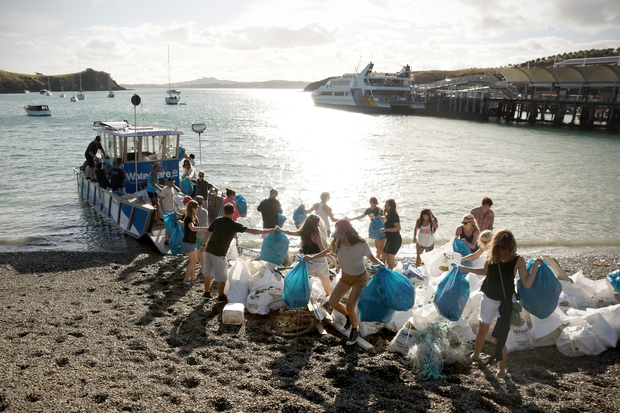 Captain Hayden Smith and a team of volunteers unload bags of rubbish collected in the Waitemata Harbour. Photo: Sea Cleaners

A kitchen sink, car tyres, a trampoline and even a jar of mercury – that’s just some of the items that volunteers with the Sea Cleaners Trust have pulled out of the Waitematā Harbour.

In just over a decade, the trust has collected about 30 million bits of rubbish from Auckland’s local waterways – enough to fill 122 shipping containers. 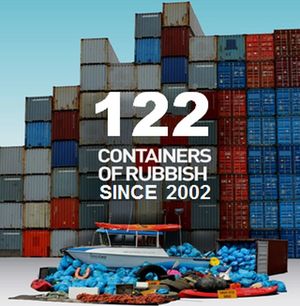 Over the last decade, the Sea Cleaners trust volunteers have collected more than 3.5 million litres of rubbish from Auckland's waterways. Photo: Sea Cleaners

Hayden Smith, one of the visionaries behind the trust, says New Zealand’s beaches are littered with rubbish, and most of it is plastic, from larger items such as drinking bottles right through to tiny grains he calls “mermaid’s tears”.

These small pellets are used to make plastic products and they are easily blown off a truck or washed down the storm water system – just like any other rubbish.

Primarily it’s off the streets. Everything comes down through the storm water system when it rains, whether it’s from individuals dropping debris, cats and dogs ripping open rubbish bags, wind blowing rubbish around, or stuff falling off trucks. It’s all centred around major population centres – and the sea is downhill from everywhere.

For Hayden Smith, the marine clean-up project began as a personal transformation. He had been working for his family business in the transport industry but was looking for something that he could feel more passionate about. He explored the adventure tourism industry, and it was while working as a kayaking guide, that he found himself literally paddling through rubbish.

“Every single kayaking trip that I was meant to be taking was blown out by a significant storm that had rolled through. After about the tenth time this had happened, I thought I need to … go for a paddle upstream to get on the water.

“It was whilst paddling into the eye of the storm and being under the Auckland Harbour bridge that I was surrounded by rubbish, and being so low in the water in the kayak, I was right amongst it.”

He says the experience was a turning point. “The moment I felt that the city has taken responsibility for what is happening on the land but that there’s nothing taking place on the water. That’s where the mission started.” 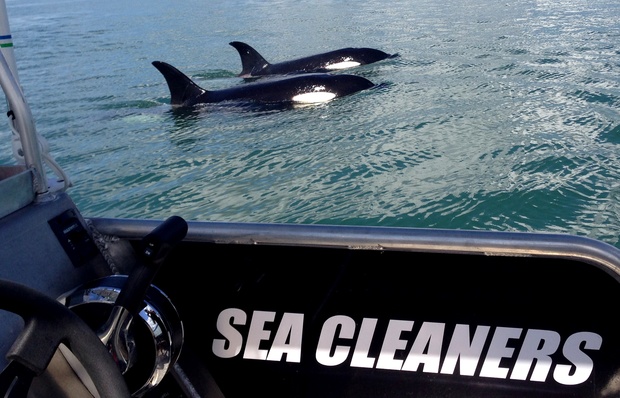 During one of the clean-up trips earlier this year, the team spotted orca in Manukau Harbour. Photo: Sea Cleaners

More than a decade ago, the Sea Cleaners trust launched its first vessel – the Phil Warren, named after late chairman of the Auckland Regional Council for his environmental initiatives – and began cleaning up the Waitematā Harbour.

Since then, 3.6 million litres of rubbish (or about 30 million individual pieces) have been pulled out of the mangrove forests lining the coastline.

A few years ago, Hayden Smith chartered a sea plane and flew across the North Pacific gyre, perhaps better known as the Great Pacific Garbage Patch, where convergence currents accumulate vast amounts of rubbish – an estimated 70 pieces of plastic per square metre.

That mission strengthened his determination to clean up New Zealand’s coastlines around the major cities before the rubbish can drift further offshore.

The cities are the sources of rubbish. If we’re not there to collect the rubbish and we’re not able to engage the communities to help us clean up their place, the rubbish builds up and ends up leaving the cities and heading into the Pacific Ocean.

To this end, the trust is now ready to tackle more than just Auckland’s marine rubbish problem and has launched the 15,000km Project to clean up all of New Zealand’s coastline. Hayden Smith says he is inspired by the number of people wanting to volunteer, but still expects the clean-up mission to take years, if not generations. “Unfortunately, with what we’ve seen, I don’t think that, certainly not in my lifetime, we’ll ever see an ocean free of plastic.”