New research on spinetail devil rays has shown that these summer visitors to northern New Zealand waters are overwintering in the tropics, and diving to record-breaking depths during their journey.

“They provided some really fascinating information about the behaviour and movements of these animals. Two rays travelled rapidly to the tropical islands north of New Zealand – and one ended up near Vanuatu and the other one just south of Fiji.”
Dr Malcolm Francis, NIWA 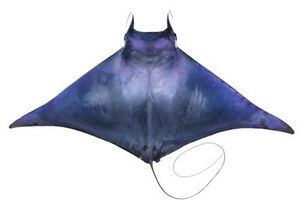 Spinetail devil rays grow to 3.1 metres across, and unlike their relatives the manta rays which have wide mouths at the front of their body, devil rays have their mouths on the underside of their body. Devil rays are capable of leaping and flying short distances out of the water. Photo: W. White/CSIRO

Spinetail devil rays are mobula rays (Mobula japanica) and they are a smaller cousin of the well-known giant manta ray (Manta birostris), which is also found in New Zealand waters and can reach up to 7 metres across. Devil rays are up to 3.1 metres across, and they weigh up to 150 kilograms. With finely pointed fins they look a little like a caped superhero as they ‘fly’ through the water.

Few of us have heard of them, but devil rays are quite frequently caught as accidental by-catch by purse seine boats, fishing for skipjack tuna near the edge of the continental shelf between Great Barrier Island and the Bay of Islands. Kris Ramm, a science advisor for the Department of Conservation working on marine species and threats, works with the fishing industry to find ways to avoid catching protected species such as devil rays. He says that spinetail devil rays, which are found in tropical waters world-wide, have been protected in New Zealand waters since 2010.

“Most of the animals come on deck alive,” says Kris. “That means that if we do have incidence of by-catch we actually have room to try and release those animals alive, so that they aren’t injured and have a long term chance of survival.” 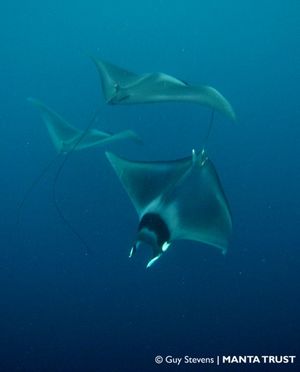 NIWA shark expert Dr Malcolm Francis has been collaborating with the Department of Conservation (DoC), the Ministry for Primary Industries (MPI) and the fishing industry to find out if these live devil rays survive when returned to the water. Fishery observers successfully attached ‘pop-up’ satellite tags to nine devil rays. These tags gather information on depth and temperature, and some of them also record light which can be used to estimate location. After a predetermined time, the tags ‘pop up’ to the surface where they transmit their data to orbiting satellites. While two tags failed to report any data and four of the devil rays subsequently died, the three survivors reported in with some eye-opening information.

“One of the rays ended up near Vanuatu and the other one just south of Fiji,” says Malcolm. “And we’re quite surprised at how fast they did it. They travelled between 1400 and 180 kilometres at least, and they covered that distance at a minimum speed of 50-60 kilometres per day, so they’re getting along pretty fast.”

As well as speeding along at the surface the two devil rays that headed off in late summer to spend winter in the tropics were making some record-breaking dives along the way.

“One of them was recorded going down to a thousand metres, and the other one to 1100 metres.”

The previous record for the species was 445 metres, recorded off the coast of Mexico.

In the top image a devil ray can be seen swimming in a purse seine net. Once aboard the fishing boat (middle image) it is tagged with a small electronic tag, and then released back into the water (bottom image). Devil rays are large and heavy, and it can be difficult to safely return them to the water. Photo: Ministry for Primary Industries

The two rays that were tracked to the tropics were only followed for a month, but the third ray was followed for three months and remained near the edge of the continental shelf off north-eastern New Zealand. It spent much of its time feeding in the top 50 metres of water, but also dived as deep as 649 metres. All three tagged rays substantially exceeded the previous depth record of 445 m recorded for the same species off Mexico. They all made frequent dives to depths  of 200-300 metres, usually during the day, and this behaviour is probably related to feeding on deep water prawns and small fishes.

Of concern is that four of the tagged rays appeared in good health when they were released but died within four days. It appears that the capture process may sometimes cause fatal physiological stress, and future work will try to determine what stages in the capture process are most stressful.

Kris Ramm says that DoC, MPI and NIWA are working with the fishing industry to develop an industry code of practise, to find better ways to avoid catching devil rays and improve the survival rate of released rays. MPI strongly supports this research, which is closely aligned with its National Plan of Action for the Conservation and Management of Sharks. Spotter planes working with the fishing boats to identify schools of tuna can report when they see devil rays, allowing fishing boats to avoid those schools. One possible mitigation measure is to empty the catch onto the boat through a large mesh cargo net, which would allow the tuna through but would catch any devil rays, which could then be easily lowered back into the water on the net. At the moment it is challenging to deal with these large, heavy animals once they are on the deck of a moving boat.

Malcom Francis says that devil rays are animals of the open ocean and don’t often come inshore, but they gather along the edge of the shelf where water depth is 150–350 m, probably to feed on swarms of small planktonic shrimp-like creatures called euphausids. They feed by swimming along with their mouths open, and filtering their small prey from the water on their comb-like gill rakers.

Previous work by NIWA’s Malcolm Francis and Clinton Duffy from DoC has used satellite tags to reveal that great white sharks migrate annually between New Zealand and the tropics, also diving regularly and to great depths on the way.

This research was presented at the NZ Marine Sciences Society and Oceania Chondrichthyan Society joint conference being held in Auckland this week.

Spinetail devil rays are classified as near threatened on the IUCN Red List.

Keeping with the theme of cartilagenous fishes (which includes sharks, skates and rays, and chimaeras) Our Changing World recently featured stories on eagle rays and rig sharks.