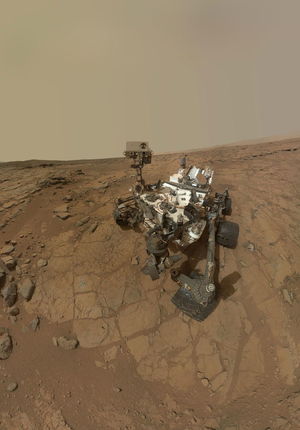 Space scientists have seen a lot of evidence for frozen water at the Martian poles, and water vapour in the planet's atmosphere, but in theory, Mars should be too cold to support liquid water.

Recently, however, NASA’s Curiosity rover discovered deposits of salts, known as perchlorates, which significantly lower the freezing point of water. The findings suggest that liquid water could form below the Martian soil surface on cold winter nights, and evaporate again in the morning when temperatures start to rise again.

The discovery was made while the rover traversed Gale Crater, near the Mars equator, taking round-the-clock, year-round measurements. An international team led by Javier Martín-Torres from Luleå University of Technology then analysed data on atmospheric humidity and temperature from a full Martian year, finding that while it would be impossible to detect the brine directly, the conditions for its formation are right.

Astrophysicist Duncan Steel says water is a prerequisite for life as we know it but the discovery does not mean that life will be discovered on Mars. “We also find organic chemicals there, all but that that means is that the building blocks of life are there. Although it’s exciting to find liquid water on Mars, there really is no way of making an estimate at all as to whether there is any life elsewhere in the universe.”