The impacts of climate change on health have been described as a "medical emergency" in a report published in Lancet this week. 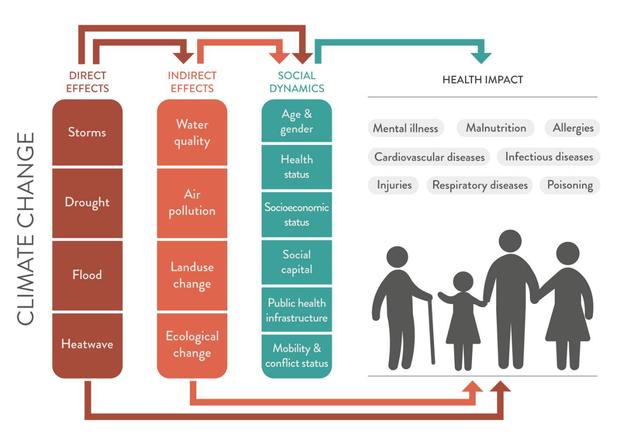 The report, produced by the Lancet Commission on Health and Climate Change, says the threat to human health from climate change is so great that it could “undermine the last fifty years of gains in development and global health”.

The authors say the potentially catastrophic risk to human health posed by climate change has been underestimated, and while the technologies and finance required to address the problem can be made available, global political will to implement them is lacking.

However, the report provides comprehensive new evidence showing that because responses to mitigate and adapt to climate change have direct and indirect health benefits – from reducing air pollution to improving diet – concerted global efforts to tackle climate change could actually represent one of the greatest opportunities to improve global health this century.

Commission co-chair professor Hugh Montgomery, director of the University College London Institute for Human Health and Performance, says the situation demands an emergency response. “Under such circumstances, no doctor would consider a series of annual case discussions and aspirations adequate, yet this is exactly how the global response to climate change is proceeding.” 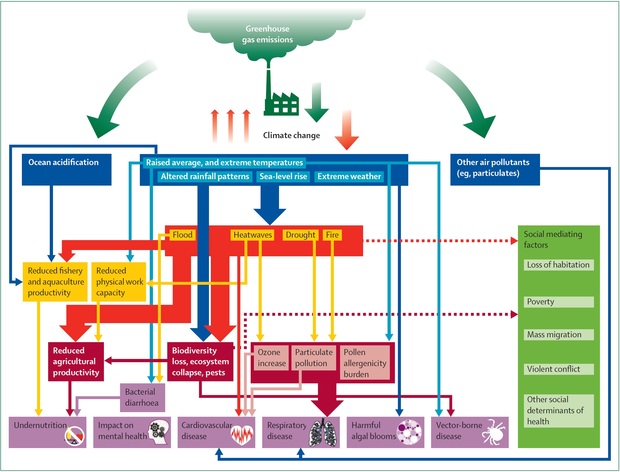 Rhys Jones, a public health physician, lecturer at the University of Auckland and co-convenor of OraTaiao: The New Zealand Climate and Health Council, welcomes the report.

It brings together evidence from a range of disciplines, but with a primary focus on human health. The key message is that tackling climate change is likely to be the greatest global health opportunity of the 21st century. That means that urgent action to move to a low (and, very soon, zero) carbon society is not just necessary to avoid the worst effects of climate change, but if done correctly it will be enormously beneficial for our health and wellbeing right now. In other words, action to rapidly reduce greenhouse gas emissions is a no-brainer – both globally and for New Zealand.

He says New Zealand’s contribution to international climate change efforts to date has been extremely weak, and in the context of this report our country’s reluctance to act can only be seen as grossly irresponsible. “Not only does it contribute to delaying necessary global action to prevent catastrophic climate change, it denies New Zealanders enormous opportunities to live healthier lives in a fairer society.”

Co-convenor of OraTaiao Alexandra Macmillan, a senior lecturer in environmental Health at the University of Otago, says climate change is the most significant health threat facing the world globally but well-designed action would provide opportunities to save lives, reduce illness and create a fairer society.

New Zealand will not be immune from the negative impacts, which are already being felt in the form of greater frequency and severity of extreme weather events, ocean warming and acidification. These are already having direct impacts on people’s health and wellbeing, as well as threatening the building blocks for good health – people’s houses, neighbourhoods, food sources and livelihoods.

She welcomes all recommendations made to governments in the report. “Of those nine recommendations, New Zealand is already making small-scale efforts in the right direction in low-carbon transport investment with recent announcements of investment in cycling and public transport; investing in research to account for the public health co-benefits of climate change mitigation policies; and supporting renewable energy transitions in the Pacific.”

At a recent meeting in a series of government consultations, held by the Ministry for the Environment to hear people's views on how New Zealand should manage its greenhouse gas emissions, doctors expressed frustration about the government’s cost-benefit approach to emissions reductions, saying that the cost of doing nothing had not been taken into account.

The consultation process is part of the government's preparation for international negotiations under the United Nations Framework Convention on Climate Change (UNFCC), which will be held in Paris in December this year to work out a new agreement that will determine the course of global climate change policy after 2020.

In the podcast below, you can listen to Scott Metcalfe, a public health physician who says he is concerned that already thousands of people are dying each year because of climate-related conditions, including malnutrition and water-borne diseases. “It’s happening right on my watch, and I feel a sense of shame about that.”