A New Device for Measuring Pressure in the Brain 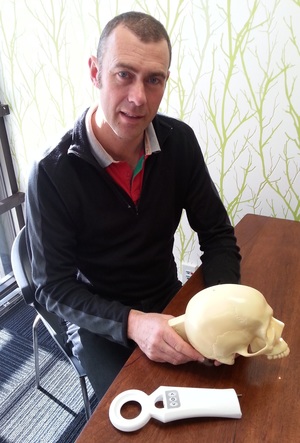 Simon Malpas with a wand used to wave over the device implanted in the skull Photo: RNZ / Ruth Beran

Inside the device is a very tiny circuit containing a glass membrane. When the membrane bends, it effectively depresses a pressure sensor inside.

Simon says this prototype device will hopefully enable the pressure to be measured in the brains of people with hydrocephalus.

Hydrocephalus is also known as “water on the brain”. It’s a condition found in infants, and affects roughly 0.5% of live births.

It is one of the more common paediatric conditions,” says Simon.

People with hydrocephalus develop an increased pressure in the cavity of the brain associated with too much cerebral spinal fluid being produced or under drainage of that fluid. The condition is treated by inserting a catheter (also known as a shunt), which in its simplest form in the 1960s was a piece of plastic tubing, to drain the extra fluid into the abdominal cavity.

In children, these shunts will block about 50% of the time within the first two years of the shunt being installed, requiring a replacement or a revision of the shunt. The symptoms of a blocked shunt may be a headache or changes in behaviour, but this is something that children and people experience often.

So how do you decide whether it’s a true increase in pressure in the brain - the shunt is failing - or in fact, it’s just a headache, a fever, something like that,” says Simon.

Currently, there are a range of investigations which rely on an expensive CT or an MRI scan, which require the child being sedated, to determine if the shunt has blocked.

Instead, the prototype device would be inserted in the skull when a shunt is being installed to provide information on whether the shunt is performing normally.

“That’s our aim, and then the surgeon later on, or potentially even the parent, would be able to come along later and wave a wand…over the top of the skull where that sensor is located,” says Simon.

When the wand is passed over the device, 1 or 2cm away from the skull, the device is energised and reads the intracranial pressure for about 10 to 15 seconds, and sends that waveform back. Ultimately, Simon hopes that this information would also go to a smart phone or Cloud-based patient health record so a surgeon or neurologist could track changes over time.

As well as reducing parents’ anxiety levels, this device may also change clinical treatment where people could potentially have the shunts replaced earlier as they began to fail, reducing emergency presentations and transfers.

One of the challenges with an implanted device like this, is it can’t be recalibrated once it’s inserted. So confidence is needed that the device is making true pressure measurements. “So a lot of our work at the moment is in fact in developing and testing what we term a drift assessment, a big rig which we can put a whole bunch of these devices in that will enable us to measure the drift over time,” says Simon. This will occur before any animal or human testing takes place, and device is only in the early phases of development, in the first year of a multi-year grant. 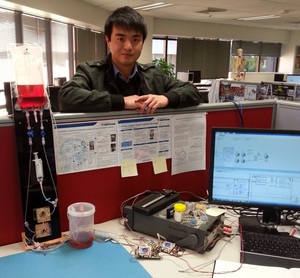 Another challenge is to make a micro-machined device that is very small, yet highly accurate. There have been a number of attempts to create implantable intracranial pressure sensors in the past, and while there is one large device available that is suitable for adults, there are no currently available devices like this one on the market. “In the past, the devices that have been tried are often really large, in other words they’re not going to fit in and be compatible with paediatric use, or they simply drift too much over time,” says Simon.

As well as working on the prototype device to enable intracranial pressure to be measured, Simon’s group is also trying to stop the shunts from blocking so often, by either changing the way fluid flows through the shunt or pushing back some of the fluid. So, for example, PhD student Dixon Leung is part of the team working on shunt performance.

Overall the big aim of the project is to improve of lives of people with hydrocephalous, by providing tools, providing technology that we hope will make a difference clinically for them,” says Simon