“Kelp is potentially really susceptible to some impacts of climate change such as warming temperatures. There are already places in Australia where the ocean is warming and it’s had negative effects for kelp forests, actual reductions in the extent of where they occur.”
Kirsten Rodgers, Institute of Marine Science, University of Auckland

Kirsten Rodgers is studying the effect of climate change on the common kelp, Ecklonia radiata, both in experimental set-ups and in the field, in the Leigh marine reserve. Photo: Malcolm Francis/Coastal Fishes of NZ + RNZ/Alison Ballance

Warmer sea temperatures and more extreme weather events leading to increasing sediment runoff are among the effects predicted to affect our oceans as climate change kicks in. PhD student Kirsten Rodgers, from the University of Auckland’s Leigh Marine Laboratory, is investigating how New Zealand’s common kelp Ecklonia radiata might cope under these future environmental conditions. And to do that she has had to develop some novel experimental techniques.

One of the questions she is looking at is how the kelp’s rate of photosynthesis varies at different temperatures and under different light regimes.

Kirsten has developed a novel chamber system that can enclose a single kelp plant, and she works underwater on scuba in the Leigh Marine Reserve with the chamber to measure the rate of photosynthesis and oxygen production by individual kelp plants at different light levels. She can increase the light by moving the plant and its chamber closer to the surface, and she can lower light levels by putting what she describes as a ‘shade cloth sock’ over the container.

“We want to understand what’s happening when a kelp is in a kelp forest, and it’s got natural light, water movement and shading from other kelp.” 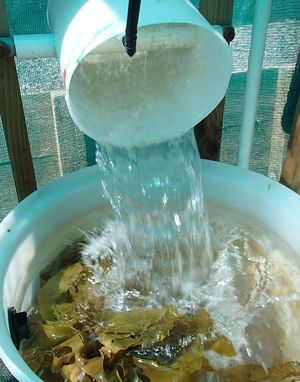 Once she has measured photosynthesis under a range of light condition Kirsten then uses this data to model the production of entire kelp forests.

To measure the rate of photosynthesis at different temperatures she has had to develop another system to work with whole kelp plants in outdoor mesocosms, because, as she says, “we can’t heat the whole ocean.” Climate change predictions are that sea temperatures around New Zealand will increase by 3° Celsius by the end of the 21st century. Kirsten has eight mesocosms, which are large barrels fed seawater from a tipper bucket that creates turbulent water conditions for the kelp. In her experiments she treats four of them mesocosms with 21°C seawater (the current summertime average around the Leigh Marine Laboratory) and the other four with 24°C water. At the same time she can manipulate the light levels by using shade cloth to create darker conditions.

What she found was that warming temperatures alone didn’t cause any measurable changes to the plant’s rate of photosynthesis, whereas low light levels noticeably decreased rates of photosynthesis.

“As one stressor increases it can push a species closer to its physiological threshold, and any additional disturbances can then have major effects,” says Kirsten. “So increasing temperatures might affect resilience.”

To test this further she blacked-out the mesocosms, to simulate a major storm-event that washes lots of sediment into the water and blocks the light for several days. These results were very clear: much of the kelp in the warmer water died, while the kelp at normal temperatures all survived.

“What that indicated was that warmer water reduced the kelp’s resilience to additional disturbance.”

So, as the impacts of climate change become more marked it will not be ‘business as usual’ in our coastal ecosystems. Kirsten notes there could be quite profound changes, and because kelp is such a keystone species “those changes in kelp functioning or distribution will have wide-reaching effects throughout the ecosystem.”

Kirsten’s supervisor Nick Shears was on Our Changing World last week talking about further research into the impact of changing light levels on kelp, and how increasing water temperatures in southern New Zealand and around Tasmania are the result of changes to ocean currents and the South Pacific tropical gyre.