Rare Mudfish, the Farmer and the School

The secret to having good numbers of one of New Zealand’s most endangered species living on a South Canterbury farm is a natural spring - which provides water even during a drought – plus a farmer who is motivated to fence out stock and work with the local primary school to improve and expand the habitat.

The fish in question is the Canterbury mudfish, the farmer is Ross Rathgen, and the school is St Andrews. Also in the mix is Lan Pham from the Working Water’s Trust.

“Ross is the reason this is happening,” says Lan. “He’s been wanting to do something with the site for years … [and now] it really just feels like all different aspects of the community coming together

This population of Canterbury mudfish is fortunate to have a sympathetic farm owner, as there is currently no legal protection under the Wildlife Act for any species of freshwater fish in New Zealand, expect for the extinct grayling, so conservation measures rely on the goodwill of landowners. 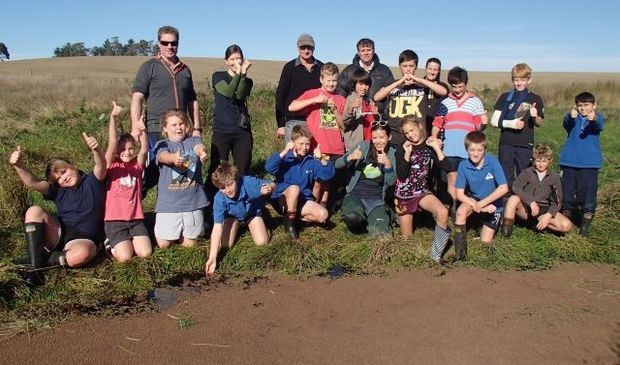 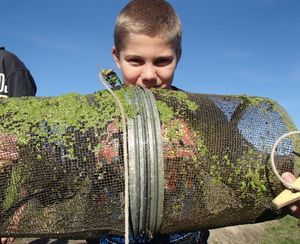 When cropping and dairy farmer Ross bought the farm seven years ago there was a population of Canterbury mudfish living in the drainage ditches, but not much in the way of fencing. He fenced off the ditch first, kept stock away from that part of the farm, and with Immediate Steps funding from Environment Canterbury’s Orari-Opihi-Pareora Zone Committee and support from the Department of Conservation, he has just completed fencing off just over a hectare of mudfish habitat.

To enhance the area for the mudfish twenty mudfish ponds were dug in the swampy ground near the drainage ditches at the end of 2014. Lan laughs and says they had to explain to the digger driver that they didn’t want the ponds – which are about a metre deep, five metres long and three metres wide – to be tidy, but rather they wanted rough gently-sloping edges where the mudfish would be able to find shelter. Water from the spring and wetland area quickly filled the ponds, and many of the ponds soon had a healthy growth of pondweed on the surface. 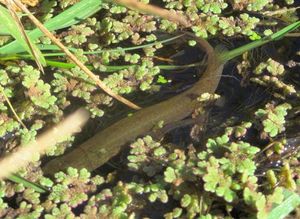 The family name for group of fish that includes the mudfish is Galaxiidae, which refers to its many silvery-gold spots - they were compared to the stars in a galaxy by early scientists. Photo: Working Waters Trust

On the 1st May 2015 Lan, Ross and a class from the school headed out to see how the mudfish had survived the intense summer drought – and whether any of the new ponds had been naturally colonised by the mudfish. The day before, Lan Pham and Sophie Allen from Working Water’s Trust, and South Canterbury mudfish expert Leanne O’Brien from Ichthyo-niche, had set fish traps baited with marmite – and the first trap they checked from one of the new ponds had caught nine mudfish. Mudfish can move between ponds by slithering across wet grass. The original ditch was teeming with mudfish, and Leanne decided that these would be liberated into a couple of the new ponds that she thought the mudfish might have more difficulty reaching themselves.

Canterbury mudfish are listed as Threatened - Nationally Critical, and are the most endangered of the five mudfish species. They are the second most endangered species of freshwater fish in New Zealand.

“The number of Canterbury mudfish populations that need attention is just huge. We literally are losing them really quickly, particularly with the drought.”

Lan gives the example how one significant population of Canterbury mudfish disappeared this year, because the habitat dried up in the drought and there were no regulations to stop the landowner from then digging it up and installing a centre pivot irrigator. Lan says the main problem is a lack of knowledge about the mudfish, with many landowners not realising they even have populations on their property.

Ross says he has plans to protect all the little wetlands and streams on the farm, and that his aim is to covenant the fenced area that the school is involved in. In the long term, Ross, St Andrews School and the Working Waters Trust would like to put a boardwalk through the reserve, which is adjacent to State Highway One, and invite the public to walk through the reserve, and learn about the Canterbury mudfish.

Department of Conservation freshwater ranger Peter Ravenscroft, who works with many threatened freshwater fish populations in Otago, joined Lan and the St Andrews school on Ross’s farm, and he was very impressed with what was happening.

“Ticks all the boxes, doesn’t it?" says Peter. "Local community with a local farmer looking after local values, with support from passionate people like Leanne and Lan, and a little bit of financial support from the likes of DoC and Ecan to provide the resources. And then benefit to a nationally critical animal – I couldn’t be happier, to be honest.”