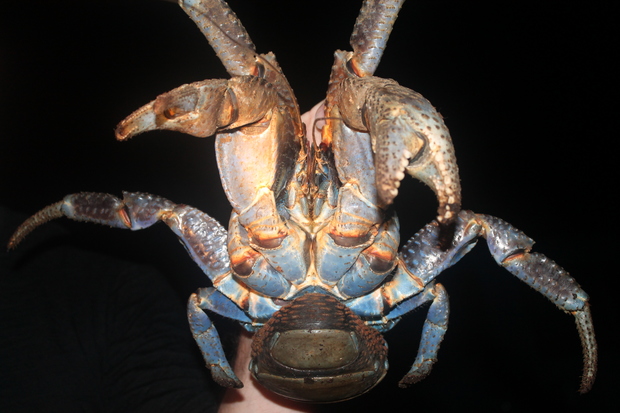 Niueans love the taste of uga, or coconut crab, and the very large, land-living arthropods are hunted across the island. They are also sent in large numbers to Niueans living in New Zealand and Australia – such large numbers that the Niuean Government has placed an indefinite ban on their export.

Brendan Pasisi is the director of Agriculture, Forestry and Fisheries in Niue. He says the introduction of x-ray machines at Niue International Airport has made it possible to accurately count the number of uga being taken out of the country by people wanting to take a tasty treat to offshore friends and family.

Around 10,000 uga left Niue last year in the luggage of locals and tourists. Brendan Pasisi says there are good indicators that this export has had a sizeable impact upon the stock of uga on Niue.

It’s clear that catching larger uga is getting harder and harder, people are having to go further and further into new areas (to catch them). It rings some alarm bells that we need to pay more attention to this. 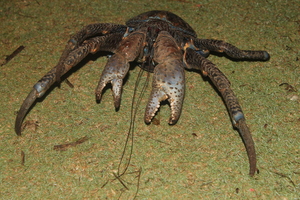 Coconut crabs reach sexual maturity at around five years of age and can live for up to 60 years, achieving their full size only after the age of 40. Once adult, the crabs only predators are other crabs, dogs, wild pigs and human beings.

Beveridge, or Bev, Mokalei takes tourists on regular uga hunting expeditions on his family land on the south west coast of Niue. He agrees that the number being sent offshore needs to be curbed and says large uga are rarer than before. Bev believes that Niueans naturally limit their take and says that most uga hunting now only happens on special occasions. And it is still possible to find a really big one.

Like Brendan Pasisi, Bev says that hunters need to head further inland and deeper into the bush to find uga but he puts some of the blame for this on the impact of Cyclone Heta in 2004. Niue took the full brunt of this category 5 tropical cyclone and Bev says that vegetation on the coast that normally sheltered the uga was blown away. The crabs were forced to go further inland to find cover.

There are no plans to lift the ban on uga exports any time soon. Brendan Pasisi admits that there was an initial resistance by locals but claims that has been overcome by education about the importance of preserving this famous and very large species of crab.

It’s an iconic species. People come here, they want to go catch one, whether they let it go or not. It means you can get some really good benefits out of maintaining the resource and using it on the island. It’s just unfortunate for our friends and relatives who live abroad. We invite them to come back and enjoy it over here.

Watch a video of uga