A Neutrino Map of the Universe 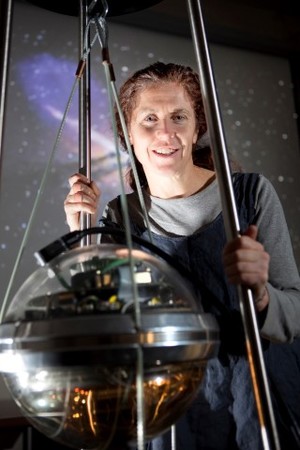 Jenni Adams with one of the IceCube optical sensors. Photo: Duncan Shaw-Brown

Cosmic rays have energies more than a million times greater than anything achievable by man-made particle accelerators.

They bombard the Earth’s atmosphere all the time, but just where exactly they come from remains a mystery. However, scientists are hopeful that neutrinos may one day help them solve the puzzle.

Cosmic rays are mostly made up of protons, the charged particles in the nuclei of atoms. Because of their charge, the rays’ path through the universe is twisted by magnetic fields, and by the time they enter the Earth’s atmosphere, there’s no way of tracing them back to their origins.

But where ever cosmic rays are generated, there are also high-energy neutrinos.

As their name suggests, neutrinos are neutral or without a charge. They therefore travel through space unimpeded - and University of Canterbury physicist Jenni Adams is now capturing these elusive particles in the hope that they’ll point her back to the birthplace of cosmic rays.

Neutrinos are elementary particles, just like electrons and quarks, which means that they can’t be broken down into anything smaller. They have a very tiny mass and no charge.

In our most immediate galactic neighbourhood, the sun is the most prolific producer of neutrinos. They are also emitted during radioactive decay, such as in the centre of our planet or in our bodies, where we each produce about 340 million neutrinos each day.

Right now there’s a billion, or a thousand million, neutrinos passing through every square centimetre of your body every second, without you knowing anything about it.

Whatever their source, they usually travel through the universe unbothered by anything else. Thanks to Ernest Rutherford, we know that atoms are mostly empty space, with the nucleus making up 99.9 per cent of the mass but taking up only a trillionth of the volume.

“And that’s the way a neutrino sees the world,” says Jenni Adams. “Neutrinos have no charge so the only way we can detect them is when they smash into a nucleus, which happens very rarely.”

At that rare moment, the collision produces charged particles that still carry the energy and direction of the neutrino, and they produce light. Over the years, physicists have gone to extreme lengths in their chase of the neutrino, trying to detect the light from neutrino crashes by using large bodies of water, such as Lake Baikal, as detectors. 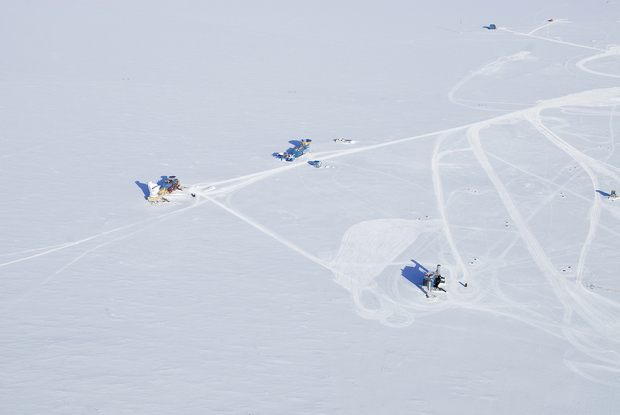 The 'dark sector' at the South Pole is an area without any light and radio wave interference. The blue building in the lower right contains the computer equipment associated with the IceCube neutrino detector, which itself is entirely underground. Photo: Andrew V Williams/NSF

The largest neutrino detector today is buried deep in the ice at the South Pole. The IceCube detector stretches over a cubic kilometre of ice, studded with watermelon-sized light detectors – and it is here that Jenni Adams and colleagues from Germany and the USA recently detected the first evidence for high-energy cosmic neutrinos.

“Solar neutrino produce just a tiny amount of light. High-energy neutrinos produce much brighter light and we have a condition that eight light detectors must light up at the same time before we can be sure that it was a cosmic neutrino.” 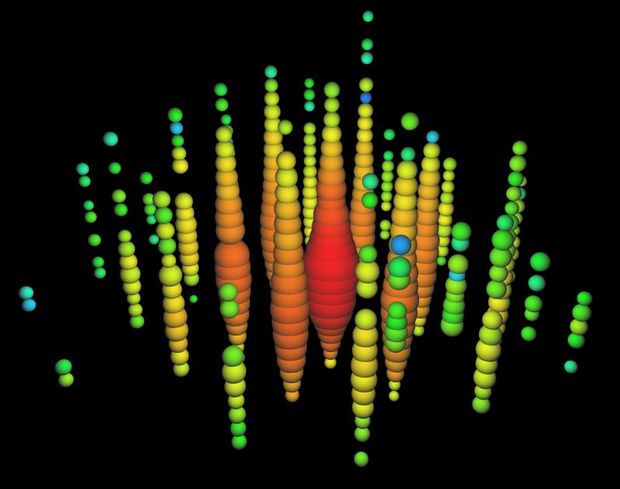 Meet Ernie - one of the highest-energy neutrinos ever observed. This image visualises how several detectors light up at the same time when they capture the moment a neutrino smashes into another particle. Needless to say, the IceCube team named another neutrino Bert. Photo: IceCube collaboration

IceCube detects about 100,000 neutrinos per year, but most of them were produced in our own atmosphere when cosmic rays interact with other particles. The high-energy neutrinos the team detected in 2013 clearly came from outside our solar system, and Jenni Adams is keen to see more of them.

Neutrinos are really unique in giving us a view of the universe that’s not possible in any other way. They are messengers, or a tool, and we are looking at a neutrino image of the high-energy universe.

The team recently received a Marsden grant to focus on reconstructing the direction of cosmic neutrinos as a way of investigating the origin and acceleration of nature’s highest-energy particles. You can watch her recent TEDxChristchurch talk below.