Flower of the Underworld - A Parasitic Treasure

“There’s something interesting and mysterious about the plants. There’s also something addictive about them.”
David Mudge, Nga Manu Trust 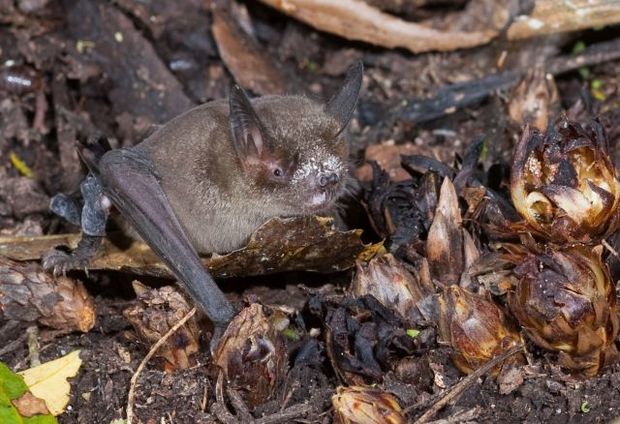 “Dactylanthus is a fully parasitic plant, a flowering plant – and without the flowers we wouldn’t actually be able to find it. It looks like a warty tuber, attached to the roots of native trees, and it’s the only one of its kind. It only lives in New Zealand, and is very unique on many levels.”
Avi Holzapfel, Department of Conservation

Just the top of a large underground Dactylanthus tuber is visible (left), and it is surrounded by a ring of brown flowers, some of which are just past their best. The seed heads, at right, are from the previous season and are covered in thousands of seeds. Photo: RNZ / Alison Ballance

In early autumn, the regenerating forest that borders parts of Pureroa Forest, on the western shores of Lake Taupo, is redolent with a musky, fruity fragrance. Photographer David Mudge, from the Nga Manu Trust, says the smell reminds him of a honey shed, while botanist Avi Holzapfel from the Department of Conservation says that to him it’s a cross between over-ripe fig and rock melon. It’s a very distinctive aroma, one that is as distinctive as the plant itself.

Maori know it as pua o te reinga, ‘flower of the underworld’ and waewae atua, ‘toes or fingers of gods’. Botanists call it Dactylanthus taylorii. It’s also known as the Flower of Hades, and as the wood rose (although read on to discover why this name doesn’t actually refer to the plant itself). Dactylanthus is a fully parasitic native flowering plant – it is a root parasite that relies on its host for all its water and nutrients, unlike other native plants such as the mistletoe, which is a hemiparasite with green leaves that are capable of photosynthesising. It does not harm its host in any way. “When the host dies,” says Avi, “or the root gets damaged, then the Dactylanthus will die as well.”

Avi Holzapfel smells a group of Dactylanthus flowers, that produce a musky fruit-scented nectar. The inflorescence, at right, is packed with nectar. Photo: RNZ / Alison Ballance

Dactylanthus has a unique relationship with an unusual pollinator. When it flowers for just two to three weeks in early autumn its musky scent attracts short-tailed bats, which come down to the ground to drink the copious nectar and spread its pollen, which it produces in generous quantities. Chris Ecroyd was the first to discover this relationship between parasite and bat, more than 25 years ago, but over the last five years David Mudge’s remarkable photographs have been casting more light on the unlikely duo, and he says that a bat feeding on the nectar at the base of the flowers ends up with a “face covered in white, as if a child’s been in a bowl of icing sugar.” 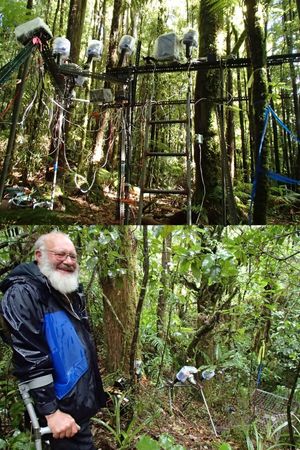 David sets up elaborate camera traps over patches of flowering Dactylanthus – each trap might have two to four cameras involved, as well as sensors and flash lights, and they are powered by large camera batteries that need to be replaced every week or two. Some of his camera traps are movement triggered, while others operate in time lapse mode, taking photos every few minutes and allowing David to follow the flowers as they bloom and then fade. The time lapse video (above) was taken by David over a few days, and shows a group of flowers blooming and then dying off - of particular note are the large numbers of different insects visiting the plant.

David says the reason he goes to such efforts to document the plant and its life is that he is a curious person, and also that he knew that “there was much more going on with the plant than I was aware of.” He has photographed bats, rats, possums, hedgehogs, birds, wasps, many weta, land snails and a whole variety of insects visiting Dactylanthus flowers.

David has even been able to document the plant’s rich nectar production – watch the video below to see the nectar oozing from the base of the inflorescence.

“A single tuber, with about 40 inflorescences, will produce half to a full cup of nectar over its 10-day flowering period,” says Avi. “That means many litres of nectar are produced in quite small areas of forest.” The nectar contains a mammalian pheromone, squalene, which explains why it is so attractive not only to the bat but to species such as the brush-tailed possum. Waikato University chemistry student Connor Haisley is currently analysing nectar collected from male and female flowers during this year’s flowering season to find out what else it contains. 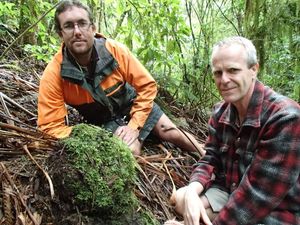 DoC ranger Thomas Emmett and botanist Avi Holzapfel next to a large, basketball-sized Dactylanthus tuber that is half out of the ground and covered in moss. Photo: RNZ / Alison Ballance

What most of us would call the ‘flowers’ of Dactylanthus are actually inflorescences: the protea-like ‘flower head’ is actually made up of about 3500 flowers, each just a millimetre-or-so across, arranged on finger-like spadices, which a non-botanist might think were the petals. A sunflower is another example of an inflorescence.

The actual Dactylanthus plant is a warty underground tuber that can grow to the size of a large basketball. The plant begins life as tiny seed, one of thousands produced by a single inflorescence. That seed germinates and waits for the root of a preferred host tree to grow past it. If that happens the seed’s radicle establishes an intimate relationship with the root, but doesn’t actually penetrate it. In response, the root develops a flared surface that the tuber fits around, like a bottle-top fitting around a bottle. It is the distinctive shape of the roots that are the ‘wood roses’, which for many years were collected as curios, and passed down as family heirlooms. 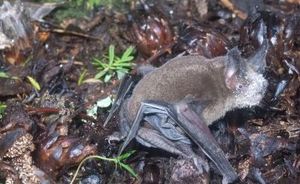 "Like a kid who has stuck their face in the icing sugar" is how photographer David Mudge describes a short-tailed bat whose face is liberally plastered in Dactylanthus pollen. Photo: Nga Manu Trust / David Mudge

Avi thinks individual Dactylanthus plants may live for 20 to 50 years, and that a population might live in an area of regenerating forest for about a hundred years while it is populated with tree species such as mahoe and five finger. But as the forest reaches a climax stage and the larger podocarps begin to take over, then the Dactylanthus population in that area will die out. “As long as the host trees are there, Dactylanthus will be there as well”, says Avi. Waikato University student Cass Parker has been identifying which species of trees in particular are the host trees at Pureora, and her preliminary work suggests that Pseudopanax is the main host.

Dactylanthus is vulnerable to damage by a range of introduced species. Possums are attracted over great distances by the smell of the nectar, which is why the Department of Conservation traps year-round at Pureora, explains DoC ranger Thomas Emmitt. David Mudge says possums eat out the centre of male flowers “like a kid eating the ice cream out of a cone.” Wasps, on the other hand, sometimes drill through the base of the flower to get to the nectar, or else completely dismember the flower. The conservation status of Dactylanthus is 'threatened - nationally vulnerable.'

Avi has undertaken sowing trials, and has managed to successfully establish Dactylanthus at new sites. Avi, David and Thomas all agree that it would be relatively easy to incorporate Dactylanthus into revegetation schemes, provided the appropriate host species are planted. David points out that Dactylanthus spreads downhill along small waterways and seepages, and this could be taken into account in any planting schemes. Avi’s experience shows that newly seeded plants produce many female flowers, which produce a large seed set and can quickly establish a new population – ‘sort of like an upside-down Ponzi scheme’ says Avi laughingly, with one plant quickly giving rise to many more.

“We’re not just seeding a generation now, but we’re planning for the future,” says David. 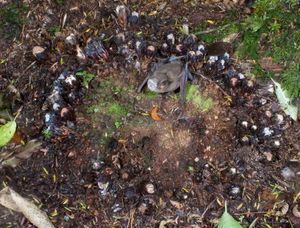 A short-tailed bat, with its face covered in pollen, on the edge of a large 'fairy ring' of flowers surrounding a large Dactylanthus tuber. Photo: Nga Manu Trust / David Mudge

Dactylanthus was once widespread across the North and South Islands. The oldest Dactylanthus pollen dates back 28 million years, and it has been found in kakapo coprolites, or fossilised droppings. Today, Pureora and Little Barrier Island are the plant’s strongholds, with other significant populations in Northland and East Cape. There are also quite a few small remnant populations, of ‘grandmother and grandfather plants', that produce a few male plants but are heavily browed by possums and are not likely to last much longer.

Dactylanthus is the most southerly occurring member of the largely tropical family Balanophoraceae. One of the Top 10 New Species for 2015 is the related Balanophora coralliformes, described from the Philippines by University of Canterbury’s Pieter Pelser and Julie Barcelona.

Check out this story, which features short-tailed bats in Pureora Forest. 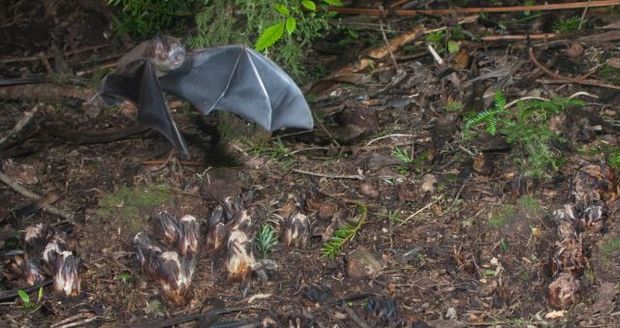 A short-tailed bat flies just above a group of Dactylanthus flowers on the forest floor at Pureora. Photo: Nga Manu Trust / David Mudge