The Art and Science of Beer

What we’re trying is to breed hops that are going to give some uniqueness to craft brewers and also to the bigger brewers in New Zealand.
Ron Beatson, Hop Lab 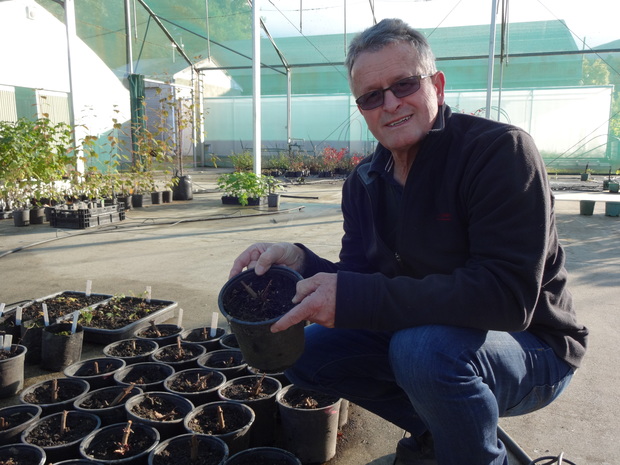 Ron Beatson with some of the hop seedlings at the Plant & Food Research hop garden. Photo: RNZ / Veronika Meduna

Ron Beatson essentially inhales beer, in the name of science and business.

The hop breeder and director of Plant & Food Research’s Hop Lab is a finalist in the research entrepreneur category of the 2015 KiwiNet Awards, which celebrate innovation in science.

His quest is to breed hops and to find just the right mix of bittering agents and flavours to provide interesting new cultivars in support of New Zealand’s burgeoning craft beer industry.

He simply loves the aroma of hops, and it is a scent that follows him and his team around throughout the year, as they breed, grow, process and analyse thousands of hop plants in search of new and unique flavours.

Last September, Plant & Food Research added a micro research brewery, known as the Hop Lab, to its Motueka site, where the team also keeps a hop garden and a chemistry lab. It allows the team to complete the full cycle of beer production, from breeding the hops to analysing the chemical composition of the cones and, finally, producing experimental brews under strict scientific scrutiny.

What we’re trying to do here in this brew house is to brew beer which is standardised for all the things apart from the hops. Each brew we put in has got a different hops selection going into it, but we have standard malts that go in and we brew it to a certain alcohol content. We brew them as pale ales so we use pale ale yeasts – so at the end of the day, the only thing we try to vary is the hops.

After the harvest, the hop cones, or strobiles, are processed for chemical analysis and brewing. Photo: Plant & Food Research

Hops belong to the cannabinaceae family, which has only two genera: hops and cannabis. The centres of origin for hops are central Asia, North America and central Europe, but the plants have been spread across the world.

They arrived in New Zealand during the 1800s with gold miners and early settlers, keeping hop gardens for community home brewing. But Ron Beatson says as commercial beer production became more important and more geared up, the Nelson region proved the best place to grow hops on a larger scale.

Hops are perennial, growing as a climbing vine during summer and dying back to a root stock in winter. Female and male plants are separate, and the plant of commerce is the female.

Once the plants have flowered, the first quality test is a “rub and sniff” of the cones, or strobiles, which contain small, orange glands. The hop aroma comes from these Lupulin glands, where aromatic and bittering compounds are stored.

The bouquet that you smell when you pick up a nice fresh glass of beer is often the hoppy essence coming through. 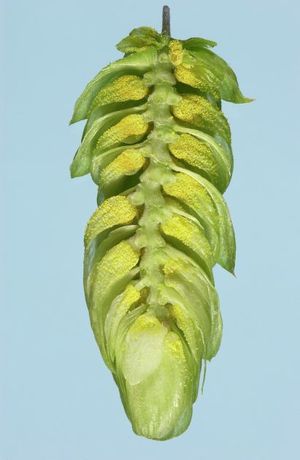 The orange Lupulin glands at the base of the cone contain all the essential oils and bittering acids that give each brew its special flavours. Photo: Plant & Food Research

The team's tasks are to produce natural crosses of hops and to raise thousands of seedlings from these crosses – and then to pick out the most promising ones for chemical analysis and brewing trials.

“You start off with a cast of thousands and, if you’re lucky, you end up with a cast of one. You’ve got a lot of unknowns. It’s quite challenging and quite exciting to go out there and think that you’re looking at plants that could be a cultivar in the years ahead, but you have no idea of their value until you observe them and start doing selection work.”

First, the team checks for agronomic traits – how well the plants grow and perform and how easily they can be harvested. Then comes the rub-and-sniff test to get an idea of the aroma. Post harvest, the chemical analysis captures different essential oils and the acids that act as bittering agents in the brewing process.

The Hop Lab has a capacity to produce 50-litre batches of beer using hops from a single seedling. The pilot brew house has produced 41 brews since it opened in September, and Ron Beatson says there is one hop selection that stands out.

We’ve done repeat brews with it because it’s come up trumps in sensory trials by industry people and our own team here. That’s a pretty good strike rate. We weren’t expecting it, but we have struck gold.

The next step will be to grow more of this particular cross to have a big enough harvest for larger-scale brewing trials with a commercial brewer next year. In the meantime, Ron Beatson says there is a small supply left for more experimental brews to see if the team may indeed have a new promising hop cultivar – joining cultivars known as Motueka, Riwaka and Nelson Sauvin that are all “cult heroes of craft brewing”, selling out every year to brewers around the world.