For Neville Keen, the decision to use medicinal maggots was the right one.

I’d do it again tomorrow,” says Neville. “Being a diabetic you haven’t got many alternatives. I’m pleased I done that because I’ve still got my foot. I didn’t end up with gangrene.

Neville had a diabetic ulcer on the side of his heel which was treated with maggots four times. The maggots were encapsulated on the wound with a dressing for up to 72 hours.

“Larvae therapy is cheap, it’s quick, it’s effective, and it doesn’t harm good tissue because they only work on dead tissue. It’s non-invasive and it’s very safe practice,” says Judy Geary, Clinical Manager, District Nursing Services at Gore Hospital where maggots have been used over the past three years to treat 20 to 30 people. It can also be faster than some other options like surgical debridement which uses tools like scalpels. 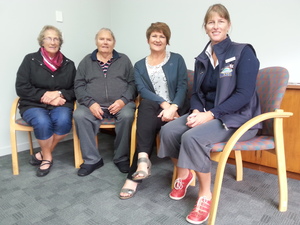 The maggots work by debriding or cleaning the wound with an enzyme they exude, they also disinfect the wound, and their mouth hooks stimulate and rough up the wound bed which encourages the healing process.

“They’ve got chitinous, quite hard little mouth parts so when these are moving across the surface of the skin, they’re helping to create some blood flow and that also helps with the re-granulation of tissue,” says entomologist Dallas Bishop who breeds the medicinal maggots in her insectary in Upper Hutt near Wellington.

She breeds European green blowfly (Lucilia sericata) and each female fly is capable of laying 200 eggs in an egg batch. The flies’ wire cages, are wrapped with cheesecloth, and Dallas will put a piece of liver into the cage overnight and then collect and process the eggs laid on it.

In order to use them for medicinal purposes, the eggs are put in a solution of 50% bleach for three minutes, which helps the eggs separate. 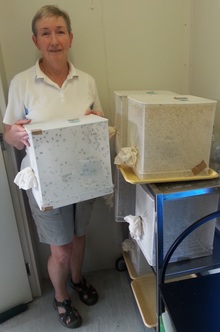 They are then transferred into a solution of 2.5% formalin for three minutes which sterilises the surface of the eggs.

The eggs are put onto commercially supplied blood agar plates overnight, and will normally hatch within 18 to 24 hours. Dallas will then put 30 to 50 hatched larvae onto transportation media in 50ml sterile plastic containers. Holes are put into the lid of the containers which is covered with a sterile, breathable dressing. At this point the larvae are only about 1 to 2mm long. These containers are couriered to hospitals and veterinary clinics (where they are used mainly on horses) around the country.

The treatment is often used as a last resort, and patients are given some pain relief for the irritation that the larvae cause on the wound as they move over exposed nerve endings. “It’s certainly not an invasive procedure, there’s no scalpels involved,” says Dallas.

When asked why the treatment isn’t being used more commonly, district nurse Sonia Richardson says: “I think it’s just being able to think outside the square and accept a treatment that’s an old treatment but new I suppose, just to progress those wounds.”

Dallas says she would used the treatment herself:

If it was me and I didn’t have any other options, yeah I think it would be a good treatment, I’d certainly give it a go.