I just think devils are cool. They’re the size of a small dog – or a really fat cat. They’re gorgeous, quite stocky, and I think they’re quite charismatic. There’s nothing like them out there in the world.
Kathy Belov, University of Sydney 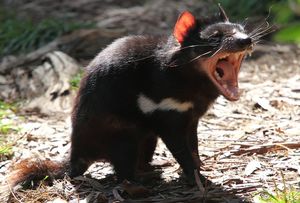 Tasmanian devils are the largest surviving carnivorous marsupial, and are know for their unearthly screams and howls as they squabble with each other over carcasses. Photo: CC 2.0 Chen Wu

Tasmanian devils are critically endangered. In the last 20 years their numbers in the wild have fallen by 85%, due to a highly contagious lethal cancer. “Devil facial tumour disease is really decimating the population,” says Kathy Belov, a genomics expert from the Faculty of Veterinary Medicine at the University of Sydney.

“This is a really unusual disease. It’s a contagious cancer that’s spread by biting. Molecular genetics work has shown us that the disease emerged in a single female devil, in one of her nerve cells, what’s called a Schwann cell, and for some reason this tumour became transmissible. And what’s really interesting is that it’s the devil who bites into the tumour on another devil who gets the disease.”

Tasmanian devils frequently bite each other’s faces as they squabble over carcasses, and also during mating. The animals often die of starvation due to the large tumours which appear at bite sites around the face and jaw, but in 65% of cases the cancer metastasises and causes organ failure.

The unique thing about the cancer is that it grows and divides without being detected by the animal’s immune system. The reason for this is that devils have very low levels of genetic diversity, as a result of population crashes and resulting genetic bottlenecks.

Devils are virtually genetically identical to each other, says Kathy Belov. 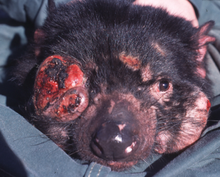 Devil facial tumour disease is a rare contagious cancer that first appeared in 1996, and has been traced to a single female Tasmanian devil. Devils bite each other frequently on the face, where large primary tumours often result in the animal starving to death. Photo: CC 3.0 Menna Jones

These noisy marsupials were once widespread on mainland Australia, but since the end of the last Ice Age about 12,000 years ago they have been confined to Tasmania. “In the last 200 years they have been through at least three major population crashes, where their numbers have dropped to as low as they are now, then slowly built up again.”

As part of the Save the Tasmanian Devil Program a large captive population of about 700 disease-free Tasmanian devils has been established in various Australian zoos, with a breeding programme to maximise the genetic diversity. The four Tasmanian devils that have been at Wellington Zoo since the end of 2013 are surplus to breeding requirements and have been brought to New Zealand as ambassadors for their species.

The initial idea was that even if the wild population went extinct the devils could be re-introduced to Tasmania from the captive populations. However, Kathy Belov says that the wild population is proving more resilient than first expected. It seems that young devils in their first year of life aren’t succumbing to the cancer, and are able to successfully produce a litter of pups before becoming sick.

Although there is currently no cure for devil facial tumour disease several research teams have developed what seems to be promising vaccines which are about to be trialled.

It’s very early days, but young devils don’t get the disease and one of the areas we’re looking into is protection in the pouch or the milk,” says Kathy. “We’ve discovered a range of very exciting novel anti-microbial peptides which we’ve tested and we know kill bacteria and fungi, and in particular they kill things like multi-drug resistant golden Staph, so we’re really excited about that … but we’re also hopeful they can kill the tumour cells.

Kathy has been involved in work looking to see if there are individuals that are resistant to the disease. Whole genome sequencing has been carried out on a number of animals and their cancers, and that data is currently being analysed. The first preliminary Tasmanian devil genome was published in 2011 and followed up in 2012.

Devil facial tumour disease is one of only two known contagious cancers affecting animals, and exists as several strains, although all the strains contain cells from the original infected female.

Kathy Belov is on the Governance Board for the Allan Wilson Centre for Molecular Ecology and Evolution. 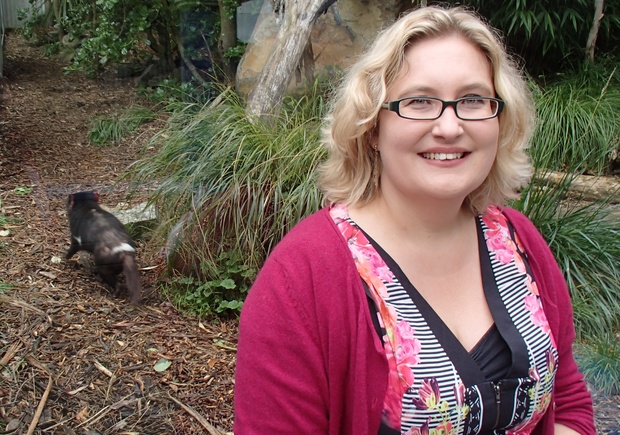 University of Sydney geneticist Kathy Belov at Wellington Zoo with one of their four Tasmanian devils. Photo: RNZ / Alison Ballance

Listen to the audio of A Devilish Cancer below: