Everywhere we saw these little mounts of carbonate, there was something coming out of them.
Expedition leader Joshu Mountjoy, NIWA

A team of marine scientists returned from a week-long expedition voyage along the east coast of the North Island with new evidence of more than 700 methane gas flares bubbling up from the seabed.

With the help of acoustic imaging techniques, the team described methane hydrate deposits and seeps on the seabed. Photo: NIWA / Joshu Mountjoy

The coastline runs along the Hikurangi Subduction Margin, a tectonically active area known to produce slow-moving submarine landslides.  A year ago, a joint New Zealand/German research team used state-of-the-art 3D seismic and echosounder technology to map the seafloor and discovered a vast network of frozen methane deposits and gas flares that play a role in the underwater land movement.

Last week, NIWA marine scientists returned to the area aboard the deep-water research vessel Tangaroa to find out how much of the methane might be escaping from the ocean into the atmosphere and to look for any ecosystems that depend on the gas as a food source.

Expedition leader and NIWA marine geologist Joshu Mountjoy says the first objective was to remap the area and to look at previously identified gas flares in more detail, using a range of acoustic techniques and a purpose-built, deep-towed image system to collect video. 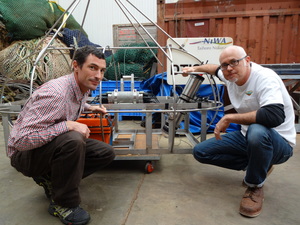 “Overall what was really surprising this time was that everywhere we saw these little mounts of carbonate we saw something coming out of them. I expected that there would be some of these that were producing gas, and some of them that were closed off and not producing, but every single lump on the seafloor had gas coming out.”

He says the total number of methane seeps is around 750 individual flare sites, all networked together and changing with time.

However, beyond that number, there are several small faults that are clearly associated with how the gas is getting up through the sediment and up to the surface. “Along these is just a curtain of gas flares as well, continuous gas coming out along the length of these faults.”

Methane hydrates are an ice-like form of the gas and usually found at water depths of 600 metres and more, within the upper 500 metres of the sediment. The deposits depend on specific pressure and temperature conditions to remain frozen within the sediment, but bubbles of methane gas can erupt through to the surface. This area off Poverty Bay is unusual in that gas seeps emerge from the seabed at around 200 metres deep.

Ashley Rowden, a marine ecologist at NIWA, says at deeper sites such methane deposits are known to support entire ecosystem that depend on the gas as a primary food source. He says the discovery of such communities in shallower sites now means that our understanding of life that inhabits gas seeps may need to be re-evaluated.

We get excited about what we see as a response to that methane, which can be bacterial mats, so little white patches on the seafloor, but also particular animals which we know rely on that methane. We see mussel-like organisms, clams, tube worms … or you can often see their dead remains because the one thing about these methane seeps is that they are ephemeral.
Marine ecologist Ashley Rowden, NIWA

One of the key questions for this expedition was whether the methane, which is a potent greenhouse gas, may be escaping into the atmosphere. To answer this, the team ran a continuous sampling regime, measuring methane bubbles and their flow rates, sampling water to track methane concentrations, and deploying equipment in the ship’s rigging to sample the air.

“The most immediate question is to understand how much of this gas is getting into the atmosphere and how much it needs to be factored in in terms of climate models.

“Then there’s also tracking it back towards the source … understanding just how much gas there actually is in the sediment. From our understanding of the landslide processes we want to know how much pressure is building up there … and how that might be affecting the changing landscape.”

The team also hopes to work out how the gas is actually produced – either through biological processes or a heat-driven system at depth.

“This comes back to looking for resources. Petroleum exploration companies are interested in that and looking for thermogenic gas production that might be associated with hydrocarbon systems. In this situation, it’s a very leaky system so it’s unlikely that it’s hugely useful, but nonetheless by sampling that gas you can get some idea of what’s going on deep in the earth.”

For Ashley Rowden, the most important aspect is the comparison between shallow and deep-water methane-specific ecosystems. He wants to know whether the biological communities are similar or not so that he can think of them in the context of future management.

“Gas hydrates which can occur in association with these methane seeps are potentially a resource which might be mined and drilled for in the future and there’s potential consequences for the organisms which live near a drill site.”