A family of pateke swimming on a specially created pond planted around the edges with shelter plants, and a shelter created in the middle of the pond to provide cover from harrier hawks that will predate pateke chicks. Photo: RNZ / Alison Ballance 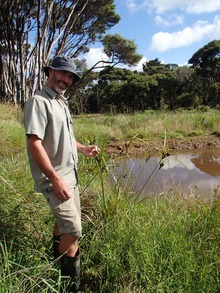 George Wilson standing amongst mercer grass and some new wetland plantings at a recently-dug pateke pond. The rushes and other plantings will eventually shade out the grass. Photo: RNZ / Alison Ballance

“Pateke used to be really widespread on mainland New Zealand – by around the year 2000 they went down to about 700 individuals, and they were categorised as Nationally Endangered”, says the Department of Conservation's George Wilson.

Fifteen years later, an intensive captive breeding programme, targeted cat trapping in key habitats and the creation of new wetland habitat has seen pateke, or brown teal, numbers climb to about 2500 birds nationally, with most of them occurring on Great Barrier Island or in Northland, east of Whangarei. They are now classified as recovering.

“Intensive predator control seems to be a factor in halting the rate of decline here in [Okiwi] basin,” says George. “Numbers seem to have stabilised and to be increasing slightly.”

An intensive study on Great Barrier Island in the early 2000s, using radio-tracking to follow the birds, not only identified predation by feral cats as a major cause of adult deaths, but it highlighted the problem that many young pateke were finding it difficult to get enough food in dry summers, when the ground is very hard. To solve this, the Department of Conservation have been creating a series of little wetlands on Okiwi Station, which the Department bought from Landcorp about 15 years ago specifically because it was a known pateke hotspot. By damming naturally wet areas on the farm, and then replanting native wetland plant species, DoC is slowly constructing a network of breeding ponds and nearby feeding areas. The planting has been carried out with the help of students from Hillcrest College and Otumoetai College.

Although once a forest duck, pateke have adapted well to farmland, and George says that at night the pastures of Okiwi Station – which are still grazed by cattle – are covered in pairs of ducks foraging in the short grass.

Pateke breed in winter, and pairs are quite territorial, which is why it is better to build a number of small breeding ponds rather than one large one. George says they are experimenting as they go, to find out how close together they can put the wetlands – and how many breeding pairs they can fit in. 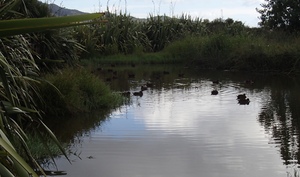 In late summer and early winter pateke gather together in large flocks, prior to dispersing for the breeding season. Photo: RNZ / Alison Ballance

In late summer and autumn pateke gather in roosting areas, in large flocks. Whangapoua estuary on the edge of the Okiwi basin is home to the island’s largest pateke roost site. At low tide the birds come out to forage on the mudflats, searching for marine invertebrates.

Craig Mabey from the Department of Conservation has been running a predator-trapping programme for 15 years, focusing mainly on feral cats. He used to catch about 120 feral cats a year on Okiwi Station, and now that he traps mainly in winter, during the pateke breeding season, he is still catching about 70 cats a year.

Pateke occur all over Great Barrier Island, but in some other catchments, such as the Awana, the birds are not doing so well, probably because of the lack of predator-control.

Pateke in the Okiwi basin on Great Barrier Island spend quite a lot of time foraging for marine invertebrates on nearby Whangapoua Beach and on the estuary's mudflats at low tide. Photo: RNZ / Alison Ballance