These native bees, from two different genera, both have full pollen sacs on their legs. The Lasioglossum species (left) is on a native Ranunculus flower, and Leioproctus fulvescens (right) is on an introduced Achillea flower. Photo: Jay Iwasaki / University of Otago 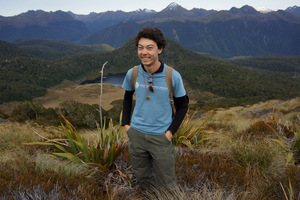 Many of the bees in New Zealand are introduced honeybees and bumblebees, brought here to pollinate crops. But amongst the 41 species found here, there are 28 little-known native bees. These bees, which range in size from 4-12 millimetres long, belong to three different genera: Leioproctus, Hylaeus and Lasioglossum. The diversity of bees here is very low compared to most other countries.

Native bees can be very abundant. “The first time I was here [in the community garden] there was a big area of coriander that was flowering and there were hundreds of native bees,” says Jay Iwasaki, a PhD student in the Departments of Botany and Zoology at the University of Otago. “And unless you’re right up close looking at them you really don’t see them, they just kind of blend in because they’re so tiny. But they’re present in really big abundances during summer on a lot of different flowers.”

Jay says the native bees are also difficult to see because they’re very flighty and fly very fast, seldom settling on one flower for long.

Unlike honeybees and bumblebees which are social and live in colonies, most of the native bees are solitary. They dig holes in the ground, commonly in loose soil and along roadside banks, for example, then they provision the cells with protein-rich pollen and sugary nectar and lay a single egg in each cell. Adult bees don’t survive the winter, but the provisioned eggs hatch in spring starting a new generation of bees. 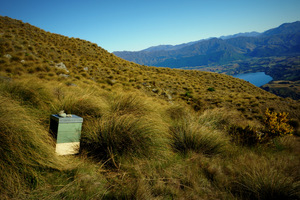 Jay’s research is looking at whether native bees and honeybees compete for pollen and nectar, as studies overseas have suggested native species are outcompeted by honeybees. His study site is in native alpine vegetation in the Remarkables Range near Queenstown. Honeybees don’t naturally occur there, and after identifying specie and numbers of bees on flowers when no honeybees were present Jay then introduced some hives and repeated the counts. His preliminary results suggest that the introduction of honeybees had no effect on the abundance and diversity of native bees in New Zealand.

Native bees are pollinators, but unlike the long tongued introduced bees which can pollinate all kinds of introduced flowers the short-tongued native bees are generally better at pollinating native flowers. Jay thinks this is why the introduced and native species can co-exist, as they exploit different resources. 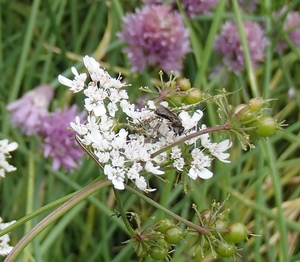 While not much is known about native bees in New Zealand research by the University of Canterbury’s Dave Kelly and colleagues in the 1990s showed that little native bees were surprisingly adept at opening explosive mistletoe flowers which were about five times larger than themselves, to reach the pollen and nectar inside.

In 2013 Ngaire Hart, who had just completed a PhD at AUT University, reported that native bee numbers at her study sites in Whangarei had decreased over three years by as much as 60 per cent.

In previous Our Changing World stories, we have looked at the potential for bumblebees to be used as pollinators in orchards, and heard about the state of the honeybee industry in New Zealand. We've also seen what bees can tell us about body clocks during anaesthesia, and seen how honeybees can be trained to sniff out chemicals and pests.