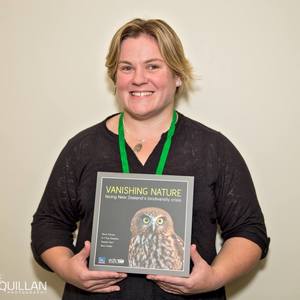 Marie Brown is a policy analyst for the Environmental Defence Society and one of the authors of Vanishing Nature. Photo: Bryce McQuillan

Vanishing Nature - facing New Zealand's biodiversity crisis provides the first comprehensive analysis of the state of New Zealand’s biodiversity. In the book, a group of lawyers, policy analysts and ecologists argues that if we want to halt the loss of our native flora and fauna, we need to fundamentally rethink how we use nature.

Marie Brown, a policy analyst for the Environmental Defence Society and one of the authors, says that the worst impact happened when humans first settled here and cleared forests, hunted and brought an “unfortunate entourage of introduced mammals” that decimated native species.

'That was the most catastrophic event and certainly rates of loss are not as high as they were then. But the issue is that the integrity of ecosystems and species has progressively declined over the years so that those species that might have found refuge in unproductive areas of land and in freshwater are now beginning to feel the cumulative impacts. While they might have survived the first wave, they are not going to survive much longer.' - Marie Brown

There are several reasons for the ongoing decline, including New Zealand’s vulnerable biota – birds and reptiles that evolved without mammalian predators and never developed behaviours to avoid them – and the fact that human impact was not only substantial but also happened in a very short period of time. Marie Brown adds that the high number of species that are only found in New Zealand adds to the severity of the consequence. "The loss becomes not only national but global – if species are lost to New Zealand they are lost to the world."

The authors argue that the main reason for the ongoing decline is that we are not addressing the real drivers of biodiversity loss. “The real drivers are what we call market failure of biodiversity, which is the fact that natural systems are left out of decision making. They are not attributed value in the same way that some of the things that we easily attribute value to are. That leads to substantial underinvestment in conservation because it just doesn’t matter as much as other things that we can value more easily.”

The book identifies the power of private over public interests as another strong driver.

'It means that our agencies do not operate in a way that necessarily does the best for the public interest in nature and they tend to service the needs of industry much more.'

She says that people have to realise that “we all have a degree of skin in the game” when it comes to the fate of biodiversity and that our food production, recreational and cultural values are all linked to it. “To me the value is inarguable,” she says. “But we take nature services for granted and they are not factored in into economic decisions.”

New Zealand is recognised as one of 28 biodiversity hotspots worldwide, and that “confers very specific responsibilities around biodiversity protection”. In Vanishing Nature the authors make six recommendations for how New Zealand could do better in conservation. “We’re not at ground zero,” says Marie Brown. “The community conservation sector has just mushroomed in recent years and people have taken an increasing amount of leadership, but there are some things we need to work harder at.”

Increased funding is essential, she says, but the money could come from a range of revenue sources. “The general treasury pool that Vote Conservation is pulled from needs to be upped, but there are other ways, including a greater emphasis on polluter pays/user pays approaches to the extraction of goods from nature, and changes to the tax system.”

The authors acknowledge that their second recommendation – the call for new economic institutions – is the trickiest. “When private and public interests clash, the environment tends to lose out. We need to align divergent interests through the tax system to a point where it is strategically advantageous for all stakeholders to do right by the environment.”

'At the moment conservation is a cost and you have to correct that. At the other end of the ledger you also have to diminish that harm that’s been undertaken without recompense. So a novel economic institution addresses that and aligns stakeholders to the point where they have an incentive to minimise harm and do good conservation work.'

Other recommendations include better accountability and monitoring, and better legislation, particularly in the marine environment. “Our marine legislation, with the exception of the act controlling activities in the Exclusive Economic Zone and the extended continental shelf, is pretty archaic. The Marine Reserves Act for example doesn’t mention the Treaty of Waitangi … and it doesn’t mention that you can protect a marine reserve for biodiversity purposes, only for scientific purposes which is not the same, and it also provides only for no-take marine reserves … and that means that very few have got off the ground.”

Vanishing Nature is published by the Environmental Defence Society. The EDS annual conference, Wild Things (held in Auckland on August 11 to 13), will focus on the ongoing threats to New Zealand's terrestrial, freshwater and marine biodiversity.