“Is the food I’m putting out for the birds good for them? Am I keeping the feeding area clean? Or should I just plant some native trees the birds will come to feed from? This is what any garden owner needs to consider” PhD Student Josie Galbraith. 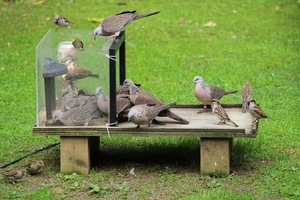 If you want to attract native birds to your garden, putting out bread may not be the right thing to do.

An eighteen month-long study of bird feeding in Auckland has found that the sparrows and spotted doves arrive in gardens in their droves to nosh off the bread … but, apart from silvereyes, the natives are not impressed.

The study has been done by University of Auckland PhD student Josie Galbraith. It followed an earlier survey by her, where she discovered that people in six New Zealand cities used up a total of five million loaves of bread in one year just to feed the birds. During her garden study Josie’s birds got through fifteen hundred loaves!

Josie Galbraith says there’s growing evidence all that bread must have substantial  consequences for wildlife generally but internationally her study is one of very few done on feeding birds in an urban environment.

Josie used twenty three gardens in her study, eleven where she fed the birds, and another twelve where the birds were not fed. Once a month, she would count birds in each garden.

She also caught them, banding some and micro-chipping about one hundred so she could measure electronically how many times they visited to feed.

She found the sparrows and doves came multiple times each day … silvereyes would only turn up when there was nothing better elsewhere and starlings visited once every three months. 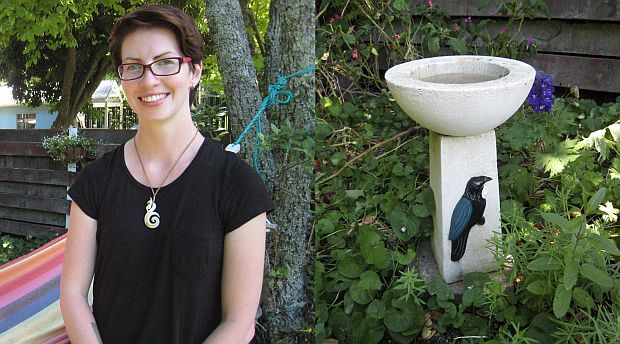 Josie Galbraith, and a bird bath in one of the study gardens, which offers birds a regular water supply. Photo: RNZ / David Steemson 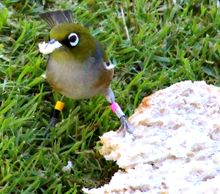 Hands off! A banded silvereye stakes a claim to a piece of bread. Photo: Josie Galbraith / University of Auckland

Most native birds were clearly not interested in the bread or grain, but some grey warblers were scared away from gardens all together. Their populations dropped by up to fifty percent.

“I guess seventy sparrows crammed into one tree can be pretty daunting!” she smiles. After the feeding stopped, many grey warblers stayed away.

Josie also measured the condition and growth of birds she caught, but has yet to analyse those figures. ”We know the sparrows carry salmonella, which humans can catch so it’s helpful to know  if  feeding in crowds encourages the spread of disease”.

“People clearly feed the birds in their gardens to bring them joy”, says Josie” Perhaps they should be giving them something them other than bread”.