“The clackers stand outside their burrows and call at the top of their lungs trying to attract a female in. They’re single males, so they’re trying to attract a new girlfriend.  At the moment we call them the ‘Desperate Dans’, because it’s near the end of the [breeding] season and they’re still trying to get a girlfriend.” Seabird researcher Biz (Elizabeth) Bell. 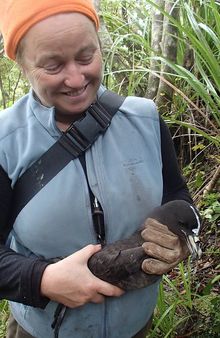 Biz (Elizabeth) Bell has studied black petrels for 19 years, and hasn't lost her enthusiasm for what she calls "magic birds". The bird she is holding is marked with a stripe of white twink on its head. Photo: RNZ / Alison Ballance

Black petrels (which are also called Parkinson’s petrels) are a familiar seabird sight in the outer Hauraki Gulf. But although they’re a very visible bird, they‘re listed as nationally vulnerable, and are recognised as being the seabird most at risk from commercial fishing. There are just 2500 breeding pairs of black petrels, and their total population, according to Biz Bell from Wildlife Management International, is somewhere between 11,000 and 21,000 birds. Biz says the population most likely numbers about 15,000, which includes young birds and non-breeders (black petrels don’t usually begin breeding until they are 4-5 years old).

The single ‘clacking’ males begin their efforts to attract a mate in October, and they may carry on through until the end of February. During that time they call every night for most of the might. They have cleaned out a nesting burrow, which is excavated underground amongst the roots of trees, which they hope will meet the approval of a female attracted by the sound of their clacking.

In late summer, the other night-time sounds on the high slopes of Great Barrier Island’s Hirakimata/Mount Hobson, according to Biz, are “lovers. A male has managed to get hold of a female, and they’re canoodling n the burrow, basically, getting to know each other, pair-bonding and getting ready to pair up the following year to breed.”

Meantime, early February is also when this year’s black petrel chicks are just starting to hatch. With so much black petrel activity happening, February is a key time of the year for Biz Bell, who visits the black petrel colony for up to three weeks to monitor hatching success in the 427 study burrows, look for new burrows and band any unbanded birds. 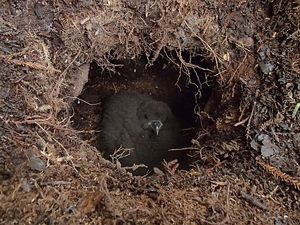 A black petrel chick that is just a few days out looks out through the researcher's access into its underground burrow. It will take 2 months from hatching before it flies away to sea. Photo: RNZ / Alison Ballance

Biz has been studying the birds since 1995, and the annual February trip is one of three trips she makes to the colonies on Great Barrier Island and Hauturu/Little Barrier Island each year. In those 19 years she has banded more than 2000 adult birds, and 2500 chicks. Only 204 of those banded chicks have returned to the colony, and Biz says this low survival rate of less than 10% does not bode well for the future of the species and is something they are working to change.

Although rats and feral cats predate on chicks and adult birds on land, the main threat to black petrels comes from both commercial and recreational fishers in the outer Hauraki Gulf, which is a key feeding area for the birds when they are feeding chicks. The petrels are an accidental by-catch, which are attracted by bait and become hooked on fishing lines.

“Unfortunately the population is showing a slight decline. [But] we’re hoping we can change that around and as more people understand the risks to these birds we can help mitigate those risks.”

Biz is working with the Southern Seabird Solutions Trust, which is working with commercial fishers to find ways of preventing black petrels getting caught on fishing lines. Each year Biz hosts a number of fishers at the Mount Hobson research site, introducing them to the birds on land, and getting them used to gently handling birds, in case they need to remove birds from fishing gear at sea.

Black petrels, with a wing span of about 1.1 metres, breed in underground burrows; they lay a single egg, which is visible here through a researcher's nest access tunnel, which is usually covered with a lid. Photo: RNZ / Alison Ballance 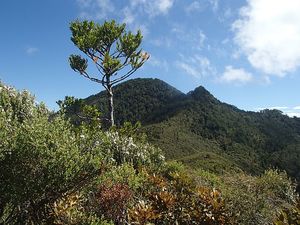 Black petrels are long-lived – there are birds that were banded more than 30 years ago that are still breeding in the colony – and Biz says this reinforces the fact that to fully understand a species you need to study it for at least the duration of its life.

Luckily for the birds, even after 19 years, Biz is as enthusiastic as ever about black petrels.

You can find more stories about New Zealand seabirds in the Our Changing World bird collection.

According to the MPI web site ‘the National Plan of Action - Seabirds 2013 recognises New Zealand’s unique place in the world for seabirds and our desire to be at the leading edge of international seabird conservation.’

In a recent Our Changing World interview, Edward Abraham and Finlay Macdonald from Dragonfly Science talked with Alison Ballance about Analysing Seabird By-Catch in Fisheries and discussed how a recent analysis has highlighted a significant problem with by-catch of Parkinson’s black petrels in the Hauraki Gulf snapper fishery.