Waitaha Penguin Out, Yellow-Eyed Penguin In

A surprising tale of extinctions and arrivals has been unfolding over the last six-or-so years, and it is rewriting our understanding of the impact of early Maori on the New Zealand environment. The latest chapter reveals that as little as 20 years and certainly no more than 100 years may have passed between the time the Waitaha penguin went extinct and the yellow-eyed penguin arrived from the subantarctic and established itself on the mainland.

The small penguin bones contained in these plastic bags tell a surprising story: those to the left of the 'extinction window' belong to the extinct Waitaha penguin, while those to the right are of the yellow-eyed penguin, which successfully colonised from the subantarctic. Photo: RNZ / Alison Ballance

Archaeologist Ian Smith (left) and zoologist Nic Rawlence are part of a team that have documented one of the most rapid species replacements ever recorded. Photo: RNZ / Alison Ballance

The researchers, including zoologists Jon Waters and Nic Rawlence, and archaeologist Ian Smith, all from the University of Otago, describe this as ‘one of the most rapid prehistoric faunal turnover events documented’, and it happened within 200 years of Maori settling New Zealand around 1280 AD.

This wasn’t a one-off event – it is paralleled in sea lions as well, with an extinct mainland species being replaced by a subantarctic species. In the case of the giant flightless moa, however, once the birds became extinct there were no populations of similar birds to recolonize.

What is remarkable about the new penguin study is not just the speed with which the extinction and recolonization happened, but that the extinction window coincides very neatly with two independent studies published last year, looking at the date of moa extinctions.

This research has only become possible recently, with the advent of techniques to analyse ancient DNA from midden remains. The recent penguin study also uses radiocarbon dating to accurately date penguin bones found in middens.

Excitingly, the team found two specific instances – at Long Beach near Dunedin, and at Old neck on Stewart Island, where the same site contains evidence that both species of penguin were eaten at different times.

“So we know Maori were occupying Long Beach in the early period, and they ate Waitaha penguin – that’s in layer 4,” says Nic. “There’s a sterile sand layer, layer 3, and then they’re back in the middle-late period, layer 2, and they’re eating yellow-eyed penguin. So we’ve got site specific turnover, not just regional turnover.”

Archaeologist Ian Smith is excited by the possible implications of the findings.

“On the one hand there’s a kind of inevitability about the consequences of harvesting these large animals that have never been subject to human pressure before. And a very large number of those animals … become extinct.”

But Ian says he wonders whether the fact that the second penguin species didn’t become extinct reflects a change in attitude by Maori.

“When a bird comes back from extinction, as would appear to be the case here, there’s an opportunity to interact with it in a different way and perhaps to not harvest it quite so intensely,” says Ian. “And perhaps what we see here is the emergence of a Maori conservation ethic.” 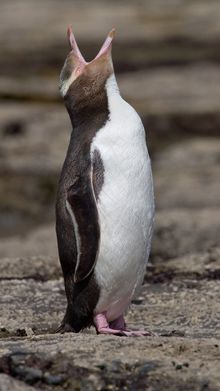 The yellow-eyed penguin, also known as hoiho or the noise shouter, was a subantarctic species that colonised mainland New Zealand soon after the Waitaha penguin became extinct due to Maori hunting Photo: CC SA 2.5 Christian Mehlführer

Subsequent work by PhD student Catherine Collins identified a new extinct species of sealion that disappeared about the same time as the Waitaha penguin.

Both studies drew on an extensive fossil collection which has also allowed Ian Smith to quantify how many fish, shellfish, seabirds and marine mammals were eaten by early Maori, as part of the Taking Stock project.

In 2014 Veronika Meduna spoke with Nic Rawlence and Te Papa’s Alan Tennyson about sister ancient DNA research that identified the flightless elephant bird from Madagascar as the kiwi’s closest relative.