Krill to Blue Whales: Food Webs in the Southern Ocean 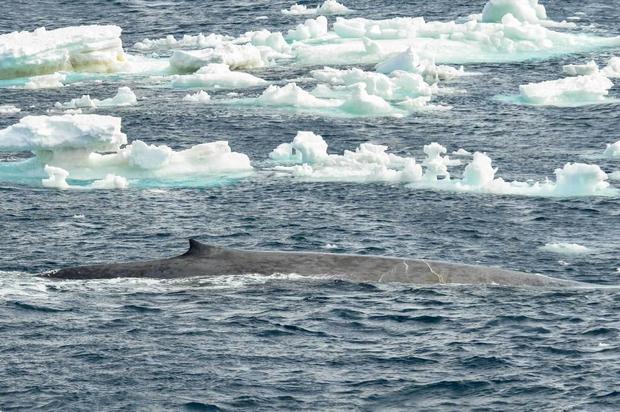 After six weeks at sea, New Zealand and Australian scientists returned home with 40,000 blue whale song recordings, hundreds of biological samples and more than a hundred species, some of which may turn out to be new to science.

The goal of the New Zealand-Australia Antarctic Ecosystems Voyage, aboard the NIWA deep-water research vessel Tangaroa, was to track top predators like whales and toothfish and to monitor the ecosystems they depend on.

Since leaving Wellington at the end of January, the Tangaroa has travelled more than 15,000 kilometres across the Southern Ocean to Antarctica’s Ross Sea and back. The weather was mostly kind and the team was able to complete all scientific goals, including the study of the feeding behaviour of humpback whales, monitoring the ecological impacts of the toothfish fishery and trying to find the spawning grounds of Antarctic silverfish. 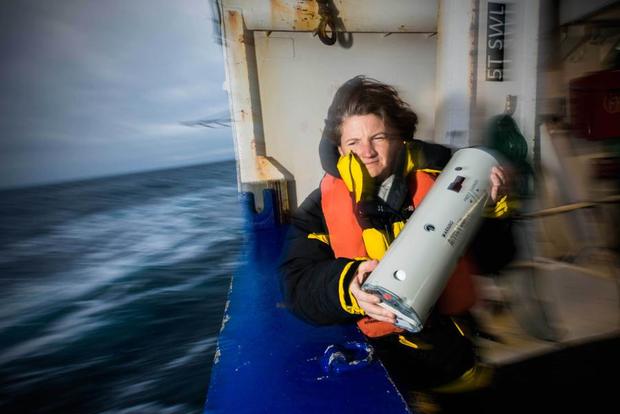 Susie Calderman from the Australian Antarctic Division deploys a sonobuoy to tune into the song of blue whales. Photo: Dave Allen / NIWA

Rather than just looking for the ocean giants, the team used an underwater sonar detector that can pick up the whales’ calls from long distances away. Mike Double says that technique was very successful. “Over the course of the voyage, we analysed 40,000 blue whale calls. Obviously we can hear them from vast distances so we weren’t very close to them all the time. We had the acoustics teams running 24/7, putting out the hydrophones, listening to the whales and then trying to get bearings … to pinpoint their location.”

Blue whales call at such low frequencies that the sound is more like a low rumble that you would feel more than hear, but Mike Double says their song is probably one of the loudest sounds in nature.

Of the 80 to 100 whales in the aggregation, the team managed to photo identify 58 individuals which will now be added to an existing database to monitor the recovery of the Antarctic blue whale population from commercial whaling. One of the questions the team would like to answer is why they aggregate in such large groups – and Mike Double says one of the possible explanations is that is has to do with foraging.

“We were also surveying the krill … and found some interesting data on the krill. There was a lot whales but not a lot of krill dispersed. But when we did find the krill they were in very tight swarms and so we are trying to understand why this habitat is particularly attractive to blue whales, how many krill are in those swarms and why the blue whales are aggregating in those areas.”

After the whale studies, the expedition moved further south into the Ross Sea to an area where Antarctic toothfish are caught commercially. Richard O’Driscoll says the goal was to study the ecosystem impact of the fishery.

“This trawl survey was about finding out about the abundance and distribution of the species that are the bycatch of the toothfish longline fishery. We were counting and measuring rattails and icefish, which toothfish eat but that are also caught as bycatch in the fishery.”

Then the Tangaroa steamed into Terra Nova Bay to put in an echo-sounder mooring that will track the migration of silverfish throughout winter. The tiny fish are a keystone species in the Ross Sea, providing one of the major links between zooplankton and predators like seals, penguins, seabirds and toothfish. 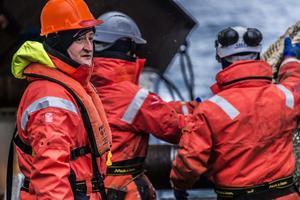 'We know very little about them. They live out in quite deep water in schools at 3-400 metres depth, and the adults are quite hard to catch. What our Italian colleagues have found is that there are a lot of silverfish eggs and larvae under the ice in Terra Nova Bay, but what they don’t know is whether the silverfish adults move into the bay under ice during winter and lay the eggs or whether the eggs and larvae just passively drift into the bay with the currents.' _Richard O'Driscoll

To find out whether there is a mass winter migration of silverfish to coastal spawning sites, the underwater echo-sounder will start collecting data in May for 200 days throughout winter. Richard O’Driscoll says this experiment could potentially reveal something completely new.

“If the spawning is under ice and they need ice to successfully spawn, obviously things like climate change, which might influence the distribution and extent of the ice, could have an impact on the spawning and that would feed up through the whole ecosystem.”

The team returned with 370 biological sample lots from the trawl surveys, and many of the specimens are yet to be fully identified. The samples include more than 100 species, some of which may be new to science. “We certainly caught stuff that I haven’t seen before and … I’m pretty confident there’ll be something new among the stuff we’ve got.”

Richard O’Driscoll said the research voyage has made a significant contribution to the understanding of food webs in the Southern Ocean.

This was a joint project between NIWA and the Australian Antarctic Division, supported by Antarctica New Zealand and government ministries on both sides of the Tasman.

You can find many more images from the voyage, by NIWA photographer Dave Allen, in this image gallery.