Glenfern Sanctuary is situated on the northern side of Port Fitzroy Harbour, on Great Barrier Island, and is part of the Kotuku Peninsula Sanctuary (left). Scott Sambell stands on a walkway leading out to a viewing platform high in the canopy of a kauri tree (right). Photo: RNZ / Alison Ballance

In 1992 champion yachtsman the late Tony Bouzaid purchased a block of land at Port Fitzroy on Great Barrier Island, and began a conservation journey. He planted his first trees to begin turning pasture back to forest, and as time went he began to control rodents - ship rats, kiore and mice - through trapping and poisoning. Over time his vision expanded from his land, Glenfern Sanctuary, to include the whole of the Kotuku Peninsula, which included private as well as Department of Conservation land. When he learned of predator-proof fences he decided that was what was required, to lessen the daily effort of trapping. Too impatient to fund-raise he spent half a million dollars of is own money to build the fence across the peninsula. A year later there was an aerial eradication of predators. 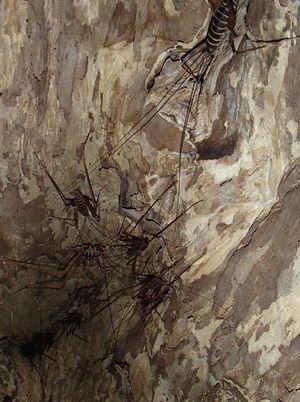 A colony of large cave wetas living in the base of a huge old puriri tree is just one of the natural features of Glenfern Sanctaury. Photo: RNZ / Alison Ballance

“2009 was the eradication,” says Glenfern Sanctuary co-manager Emma Cronin. “And that was successful. But because we’ve got effectively one fifth of the perimeter protected by the fence, we’ve still got four fifths where rats and mice and other predators can still get in. And that’s what they have done so we’re currently in a control mode.”

These days there is a network of 1000 tracking tunnels and bait stations, and with the help of Milie the rodent dog co-manager Scott Sambell and his team are able to deal with the occasional rodent incursion and keep their numbers effectively at zero. The results of predator control are just starting to show.

"I’ve been involved in the project for seven or eight years, and living on site for four years," says Scott, "And it was last spring that I woke up one morning and went holey moley, there’s a dawn chorus. I was like ‘hold on a second, we don’t have a dawn chorus’ but then it was like ‘we do now, you know. So I’ve heard a difference in the last couple of years. And it’s not just that. We’re talking about the lizards and the invertebrates, which are very important.”

Scott is collaborating with WWF's 2014 Conservation Innovation Award winner Gian Badrum from Micro Systems Research to develop TrapFinder. The system uses a heat sensor to detect warm blooded mammals, and will notify staff when a rodent has been detected or when the predator-proof fence has been breached. The $25,000 prize money is being used to trial the system at Glenfern Sanctuary.

Emma Cronin and Scott Sambell with Glenfern sanctuary in the background (left), which is on a peninsula protected by a pest-free fence and a rodent dog called Millie (right). Photo: RNZ / Alison Ballance

Scott tells the story of the duck pond to illustrate Tony's vision and determination. He took a large digger to enlarge a small natural pond, hoping to create pateke or brown teal habitat. Unfortunately he managed to drain the pond and many years passed without any water in it. Finally some orphaned pateke needed a home, and Tony instructed Scott to make the pond happen. That call coincided with Tony's sudden death in 2011, and in honour of his former boss Scott rang around and raised the money for a liner for the pond, enlisted the community's help to dig it in, and then got the local volunteer fire brigade to pump 50,000 litres of water from the house water tanks up to the pond. The pateke chicks arrived the following day and there is now a thriving pateke population.

Glenfern Sanctuary is currently for sale, waiting for a new owner who will share Tony's vision of restoring the forest. In the meantime the sanctuary relies on volunteers to help with the day to day running, while holiday makers renting the two houses on the property provide much-needed cash.

Scott and Emma are pleased with the changes they see happening at the sanctuary. "It’s got such a vast potential to be gradually returning to what it was," says Emma. "And Tony had seen this gradual demise of what he remembered Great Barrier Island to be, and he just wanted to capture that and provide that opportunity for people to be able to come and experience it and see that and know what they could potentially be losing."