Drug-Resistant TB and a New Class of Drugs

“The problem is we’re running out of drugs, basically. Probably the greatest discovery of the twentieth century was antibiotics, but we’ve used them so much that resistance is everywhere. We’ve probably released about 50 million tonnes of antibiotics into our environment.” Microbiologist Greg Cook, University of Otago

Microbiologist Greg Cook, from the University of Otago, carries out research into the bacterium that causes tuberculosis (TB) in humans: Mycobacterium tuberculosis. He is particularly interested in the metabolism of microorganisms, and the goal of his research is to produce a new class of antibiotics – or metabiotics - that specifically target the metabolism of microorganisms such as the TB bacterium. 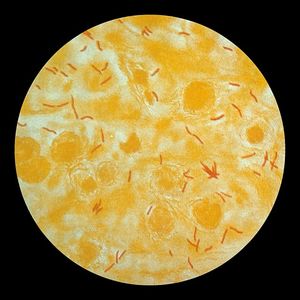 Greg Cook says that for nearly 50 years no new antibiotics were developed to treat TB, as the use of antibiotics during the 1950s and 1960s was very effective at almost eradicating the disease. However, the AIDs epidemic has seen a big increase in the number of immune-compromised people suffering from TB, and a corresponding rise in drug resistant TB. Multidrug-resistant TB (MDR TB) is caused by an organism that is resistant to at least isoniazid and rifampin, the two most potent TB drugs. Extensively drug-resistant tuberculosis (XDR TB) is resistant to almost all drugs used to treat TB, and accounts for about 10% of the cases of MDR TB.

In 2014 the World Health Organisation (WHO) released its first global report on antibiotic resistance, which revealed a serious, worldwide threat to public health.

“Antibiotics are something that people seem to think we’ve discovered in the last 80 years,” said Greg. “But in actual fact these antibiotics have come from soil organisms. And some of these antibiotics are 50 to 100 million years old. So they’ve been in the environment for millions and millions of years, and if you go out into the environment and find pristine soils that have never seen agricultural practise and you randomly sample bacteria for resistance then what you find is that there are already bacteria in the soil that are resistant to antibiotics. And there’s new research showing that bacteria in the soil can actually grow on antibiotics. So, as fast we develop antibiotics, these resistant determinants are already sitting out there in the environment.”

Research in Greg Cook’s lab in the early 2000s identified the mechanism of action for mycobacterial ATP synthase, an enzyme that is essential for the generation of energy in Mycobacterium tuberculosis. At about the same time Janssen identified a drug called Bedaquiline (now marketed as SIRTURO™), which specifically inhibits this enzyme. Bedaquline is used in association with existing TB drugs, and Greg says it is is capable of treating TB within 8 weeks, compared to usual multi-drug treatment which takes two years.

“This was the first time that a drug had actually been used against the energy generation machinery of a bacterium,” says Greg. “So it’s a completely new class of antibiotics. And this was incredibly exciting for us as we believe this is where the new antimicrobials are going to come from.”