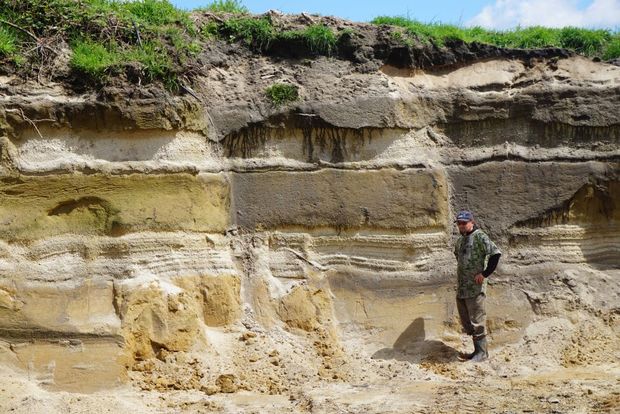 Dairy farmer Eric Smeith has dug a soil pit on his farm to demonstrate the different volcanic layers below the top soil. Photo: David Lowe

Eric Smeith is a dairy farmer in Galatea, in the Bay of Plenty. He’s lived there all his life and has watched the impact that hot and dry summers can have on agriculture. But he has also noticed something else: whenever power lines or water pipes have to be dug into the soil, the pasture growing on the newly mixed top soil is usually much greener.

A few years ago, he embarked on an unusual experiment to test whether he could improve the productivity of his soil by digging up tephra from a volcanic eruption that happened more than 5000 years ago – with promising results.

‘You can actually see it on Google Earth satellite photos. You can still see this green strip in this paddock here’. _Eric Smeith

The grass clearly is greener on the other side: these trial plots show that the flipped soil holds water for longer and produces more grass during the dry season. Photo: Eric Smeith

Volcanic soils cover much of the central North Island, and the thickest sequences of tephra (the loose ash and fragments left behind by volcanic eruptions) are found in the Bay of Plenty and Hawke’s Bay. Some volcanic layers contain a mineral called allophane, which helps to retain water – and Eric Smeith thinks that it is this higher water retention of the buried layers that has helped to green his experimental pastures.

To find out whether Eric’s experiments are repeatable, DairyNZ funded a field trial on his farm – the Galatea Soil Flipping project. The purpose of the trial was to quantify the pasture response and economic return of farming on ancient soils, and to see whether the technique could be used to improve productivity of similar pumice soils across the Volcanic Plataeu. Bill Adam, from the DairyTeam in Whakatane, says he was sceptical at first.

‘I was absolutely terrified that we would take all this expensive potash and phosphate that Eric had been applying for years and years and bury it away one and half metres underground and that it would take us forever to fix it. But actually that didn’t happen. What came up from deep down below had a better pH than what was on the top.’ _Bill Adam

Phosphate and sulphate levels in the deep soil were also high, and Bill Adam says this was most likely because the fertilisers that had been applied to the land for many years had accumulated at depth.

The trial results show that bringing up these ancient volcanic layers improves pasture productivity, as long as carbon is returned to the soil, either by mixing in the original top soil or working in organic material.

Nadia Laubscher, a postgraduate student in soil science at Waikato University, looked more specifically at what happens to the root systems of grasses grown on flipped soils and how well they retain water. She found that the more finely textured buried soils had much better water retention, and that the more readily available water allowed roots to grow more evenly and to penetrate deeper.

“It was even obvious to the touch,” she says. “You’d have big chunks of Whakatane tephra in a mixed soil and you’d touch it and the tephra would be quite moist.” 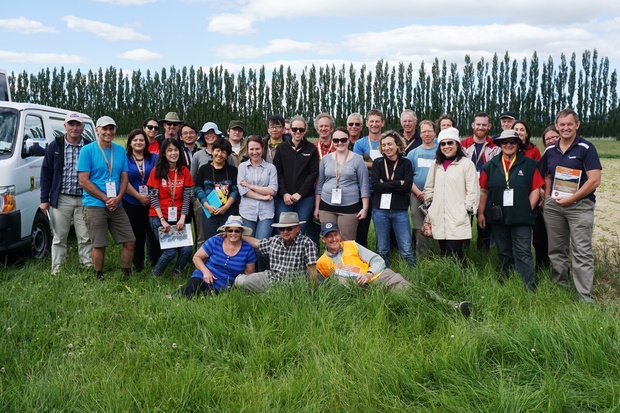 A group of soil scientists enjoying a field trip to explore volcanic soils. Dairy farmer Eric Smeith is pictured in the middle of the front row, and on the right is Waikato University soil scientist David Lowe, who lead the trip. Photo: David Lowe

2015 is the International Year of Soils, and my visit to the Smeith farm was part of a New Zealand Soil Science Society field trip to explore volcanic soils. You can listen to another feature about volcanic soils here

SOS for Soils duration 20′ :46″
from Our Changing World
Add to playlistPlaylist
Download
SOS for Soils

More features about soil science are coming up throughout 2015.