Antipodes Island scenery: view down to South Bay; expedition members waiting out a snow squall; and view of the hut and the large peat slip that came down the hill behind in January 2014. Photo: RNZ / Alison Ballance

It's wind-swept, storm-lashed, hard to get to and difficult to walk around on, but uninhabited Antipodes Island is a remarkable gem. Its parakeets hang out with penguins, it's the only place in the world where Antipodean wandering albatrosses breed, it's home to hundreds of thousands of seabirds, and it's a stronghold for erect-crested penguins.

If it wasn't for the mice it would be perfect.

But an ambitious project - lead by the Department of Conservation, the Million Dollar Mouse project and WWF - is underway to rid Antipodes Island of its unwanted rodents, and the first advance parties are already heading there to make sure everything is set up.

More than 800 kilometres from mainland New Zealand, Antipodes Island is the most remote of New Zealand's five subantarctic island groups. Mice have been on the island for 100 or so years. They probably arrived accidentally, along with sealers or ship-wrecked sailors. There have been three wrecks on the island, although in both the early cases the marooned sailors were rescued. The old Government castaway depot, built in the late 1800s to provide shelter for such emergencies, still stands.

In January 2014 the castaway depot was pressed into service for albatross researchers Kath Walker and Graeme Elliott. Arriving for their annual breeding census of wandering albatrosses they discovered that the research hut had been knocked off its piles, shunted 20 metres and swung through 90 degrees by a large debris slip which had come down from the hill behind.

Large amounts of vegetation, peat and the hut's water tank had slid over the cliff into the sea. The slip was just one of many slips, covering 15% of the island's area, that had occurred following a very heavy rain event sometime in early January. Judging by old slip scars, major slip events like this are a common event on the peat covered island, which has no trees but rather a tussock, fern and megaherb dominated vegetation growing on a thick layer of peat that is much undermined by seabird burrows.

The hut is of key importance for the mouse eradication - planned for winter 2016 - necessitating urgent and extensive repair work. The hut was stabilised and made watertight by the Navy when they visited the island to pick up Kath and Graeme, who had begun the task of digging peat away from the hut and diverting water. In August 2014 an expedition headed to the island with building materials in an effort to rebuild it, but they were unable to land for more than a week due to strong winds and high seas. They eventually got the material ashore, but were unable to make much headway on the repair job.

In mid-October, Alison Ballance joined a spring expedition to the island which had two main tasks: re-pile and rebuild the hut, and re-survey the penguin colonies, which appeared to have been significantly affected by the slips.

The erect-crested and rockhopper penguin colonies which ring the island's coast numbered about 40,000 breeding pairs when they were counted in a ground survey in 2011. The intention is to resurvey the penguins every five years, but it was decided to resurvey them earlier to quantify the damage caused by the slips.

The 5-yearly census was begun to monitor long-term population trends, as there have been significant declines in penguin numbers since occasional surveys began in the 1970s. Judging by photos, many previously large colonies have shrunk significantly in area.

The results from the 2014 spring count, which was timed to coincide with the incubation period of the erect-crested penguins, showed an overall decline in breeding pairs of 19% compared to 2011. Colonies that weren't affected by slips had declined by 13%, while slip-affected colonies were down by 24%. Numbers of breeding penguins vary between years, so it is too soon to say yet whether the downward trend is a long-term one, but it is clear that the slips have had a short term impact on penguin numbers.

Out of 89 nests that were check in the Antipodean wandering albatross study area, there were 26 failed nests. Sixty three chicks were banded; this is low compared to the early years of the study, but quite good for the last couple of years. The researchers don’t know why the population has dropped so much – it may be something to do with food supplies out in the ocean.

2000-hectare Antipodes Island is a National Nature Reserve and a World Heritage Site. The Antipodes Island mouse eradication is scheduled for the winter of 2016, and is a joint project of the Department of Conservation, the Million Dollar Mouse project and WWF. 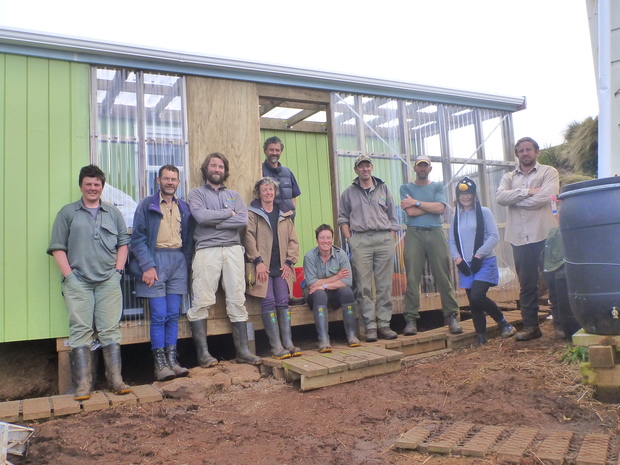 A sister story on the expedition's visit to the Bounty Islands aired on 19 February 2015.

The loneliest tree on Campbell Island