‘We’ve now become a biogeophysical planetary force. Human beings, our economies, our technologies, are driving all sorts of changes to what we call the Earth system. We are becoming future eaters, weather makers, biodiversity destroyers, how ever you want to put it, we’ve become a planetary force.’ _Will Steffen

An international team of scientists has issued a warning that human activity is pushing Earth into critical mode. Earlier this month, the team published research that shows that we have now transgressed four out of nine planetary boundaries, and that most of the damage occurred since the 1950s, in step with global economic growth.

Lead author Will Steffen, at the Australian National University and the Stockholm Resilience Center at Stockholm University, says we have about five years left to make policy decisions to stabilise conditions and to keep Earth hospitable. 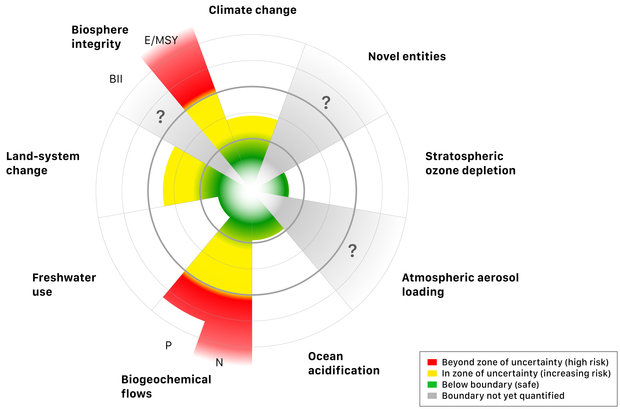 The loss of biological diversity, fertiliser use, climate change and land use have now all gone beyond a point of "safe operating", says Will Steffen, increasing the risk of disrupting complex interactions between the land, ocean, atmosphere and people.

The definition of planetary boundaries is based on nine processes that together describe how the Earth functions. As a baseline, the team uses the conditions Earth has been experiencing during the Holocene, a geological period that spans roughly the last 12,000 years. “This has been an unusually stable period and the only period during which humans have been able to develop agriculture, cities and civilisations,” says Will Steffen.

Modern humans emerged about 250,000 years ago, but is was only about 10,000 ago that we developed agriculture after the world came out of the last ice age into a relatively warm period. “The Holocene is the only state of the Earth system that we know for certain can support modern human societies, so that’s our baseline. What we do is we take those nine processes and assess them against the Holocene conditions, and then we see how far we can push them before we get out of the Holocene envelope of variability.”

Research shows that some of these processes, climate change for example, have thresholds, or tipping points when the Earth system flips. Will Steffen says the planetary boundaries were defined upstream of any thresholds “to give us time to react when early warning sign are observed”.

The latest boundary we have transgressed is land use, or the amount of forest lost. In two of the other three crossed boundaries - climate change, biodiversity loss and nitrogen/phosphorous pollution - the team says we have now entered the red zone.

One is what the team calls biosphere integrity, or the ability of the living part of the planet to provide the services we need. Will Steffen says one component of this is "functioning", which provides all sorts of services from the pollination of crops to the replenishment of soils.

'The other is the longer-term genetic information bank that allows the biosphere to adapt to long-term change, to cope with abrupt change and to evolve as the geophysical part of the planet changes. We think that we’re losing that capability at a much faster rate than we should be. The extinction rates are today a hundred or even a thousand times more than the background rate, and the science tells us that’s too high.'

The other red-zone boundary is the cycling of nitrogen and phosphorous, associated with fertiliser use. “This is concentrated in four major zones around the Earth, in big areas of intensive agriculture in the central US and Canada, in western Europe, in northern India and northern China – and in all of these the application rate is far too high and leading to local environmental problems … but also planetary-scale implications.”

Climate change, says Will Steffen, is still in the yellow zone, but because changes in climate affect all other planetary processes, it has been declared as a core boundary, together with biosphere integrity.

In another publication, the team shows that most of the damage through human activity has occurred since the 1950s, supporting arguments that we are living in the Anthropocene, a geological period which will be viewed as one largely influence and shaped by our impact.

There are two sets of graphs, one looking at how humanity has developed over the last 260 years since the start of the Industrial Revolution, and the other at how the Earth system has changed. 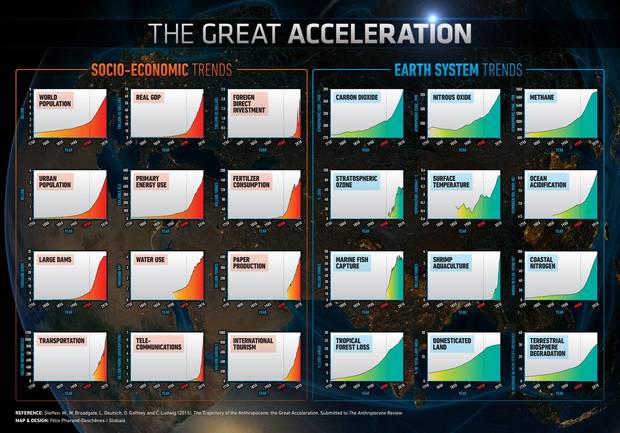 Will Steffen says that the data show clearly that human activity didn’t increase much initially, until about 1950. “But then you see an explosion of the human enterprise. All of those indicators shoot up at a quite remarkable rate, so we’ve given the nickname to this post-1950 period as the great acceleration.”

On the right side of the diagram, 12 indicators track the functioning of the Earth. “Here you see that many of these are shooting up, moving in lock step with the human indicators."

'This to me is the most convincing evidence that we have indeed entered the Anthropocene, because when you look at those Earth system indicators, they are virtually all outside of the bounds of variability that we see over the last 12,000 years in the Holocene. It has all happened within one lifetime.'

Will Steffen says while it’s impossible to reverse the trend completely, the goal has to be to stabilise the Earth in a Holocene-like state. “There is a chance, although the door is closing. We’ve got about five more years to make the right investment decisions … to stir us on a trajectory that will deliver a stabilised climate system by mid-century, but the decisions to achieve that have to be made in the next five years.”