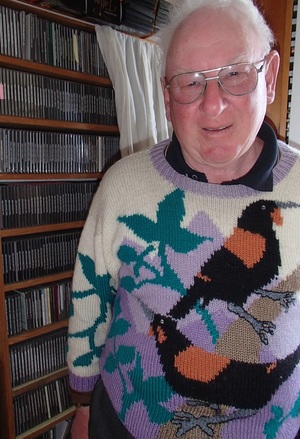 In 1969 Les McPherson made his first sound recording - of house sparrows in his Christchurch back garden. He was living on a busy corner, and as well as sparrows the 8 minute-long recording features traffic, wind knocking his parabolic reflector against its tripod and his neighbour shouting at her kids. But that initial foray into recording bird calls still holds pride of place as Track 1 on CD1 in what has grown to become the McPherson Natural History Unit Sound Archive. Forty five years later the archive now includes almost 1000 CDs, containing more than 27,000 recordings, primarily of New Zealand birds but also many South Pacific birds and a few insects as well.

Although his recording trips have taken him to the Chatham islands, islands of the Hauraki Gulf and the titi islands near Stewart Island, Les McPherson, who is now retired and living in Ashburton, says he is not an outdoors person. The bird recording has been a weekend and evening hobby, and his day job was packing and dispatching women's lingerie.

Many of the recordings in the archive were recorded by Les himself, but once he set himself the goal of having a recording of every bird featured on the New Zealand checklist he realised he would need to beg or barter recordings with other people. He has developed relationships with universities, Crown Research Institutes, scientists and ornithologists around the world, and is now just a few birds shy of his goal. He rates seabirds, especially those that breed on remote islands, as one of his greatest challenges, and rues the fact that he is still missing dabchicks and Bounty Island shags.

Our Changing World producer Alison Ballance visited the Bounty Islands shortly after recording this interview with Les about his recording career, and attempted to get some shag calls for Les. She managed to record a few grunts, but on the whole she found that Bounty Island shags are curious but quiet.

Many of Les's sound recordings feature on the New Zealand Birds Online website, and in 2014 Katrina Batten at Radio New Zealand worked with Les to widen the diversity of bird calls that play on Morning Report each day. The original Morning Report bird calls, which began playing in the late 1960s, were provided by the late Johnny Kendrick, whom Les credits as an early inspiration.

The Nga Manu bird collection on the Radio New Zealand website includes all the Morning Report bird calls as well as bird stories that have played on Our Changing World, along with Hugh Robertson's regular bird slot on This Way Up.